The Legion of Honor in the rank of Chevalier (Knight) was bestowed to Professor Kevin Thompson, Master of University of Macau Moon Chun Memorial College, during a ceremony at the Clube Militar De Macau on June 20, 2017. 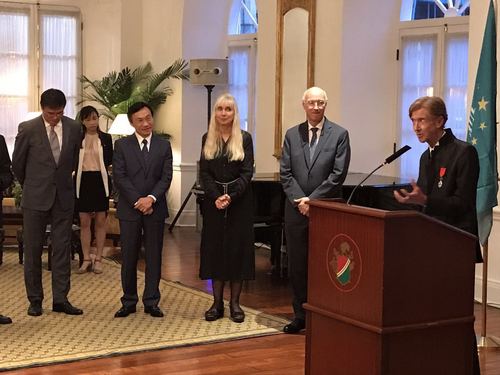 Prof. Kevin Thompson is a great promoter of French culture and arts in Hong Kong and Macau. Appointed Director of the Birmingham Conservatoire in 1989 and, then in 2004, Director of the Hong Kong Academy for Performing Arts, Prof. Kevin Thompson has been tirelessly defending the interests of French artists and promoting French culture to the local public and authorities. For more than ten years, he has been supporting the cultural activities of the Consulate General of France such as "Le French May" created in 1993 by the Consulate General of France and the Alliance française.

Since his appointment as Master of University of Macau Moon Chun Memorial College in 2013, Kevin Thompson has widely contributed to the development of the festival in Macau by increasing contacts with government authorities and locals universities. He also promotes the French higher education system in Macau. Thanks to his efforts, the Consulate General of France has recently extended its summer scholarship program in partnership with the Légion d’Honneur Club Hong Kong Chapter to Macau students.

The award is a recognition of Prof. Kevin Thompson’s contribution to the promotion of French culture in Hong Kong and Macau allowing to strengthen the links between these three territories, their governments and their people.