Theme parks are going for green

France’s leisure parks are attracting increasing numbers of visitors of all ages and from all countries. The market has doubled in ten years. As these parks play a crucial role in the regional economy, new ones are being created which are committed to helping people explore their environment. Today some of these parks are even based on an environmental theme... But with plenty of attractions too! 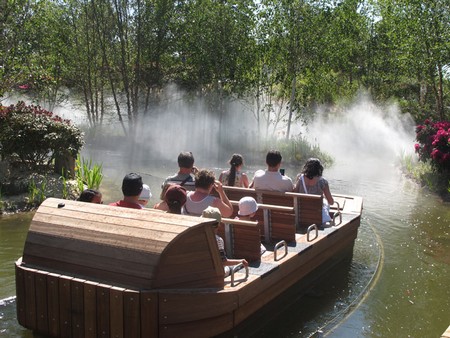 The boats in the Odyssée Botanique© Daniel Garandeau / Terra Botanica

Alongside the unmissable Disney and Astérix, other leisure parks have decided to root themselves in their region and help people explore the specific environment where they are located. Examples include Vulcania in Auvergne, Nausicaa in Boulogne, Océanopolis in Brest, the Aquarium in La Rochelle and the Cité de la Mer in Cherbourg.

Terra Botanica, which opened in 2010, has taken the same approach. Located in the biggest horticultural region in France, Anjou, it is the first European park devoted entirely to plants. Eana, in Normandy, explores local history and is also unusual in that, when it opened in 2008, it was the first park to be based on the theme of sustainable development. It welcomes not only the general public but also businesses, teachers and schoolchildren, and raises awareness through a series of workshops – on renewable energies, for example – exhibitions and events such as the nature et famille (Nature and Family) show. It provides a number of trails through vast themed gardens and a farm where some of the more neglected breeds of Normandy cattle graze. It must be said that one of the most important assets of green leisure parks such as these is often their exceptional setting, for example the 47 hectares dotted with forests and 17 ponds of DéfiPlanet’, near Poitiers, and even, in Eana’s case, a real Cistercian abbey.

Other recent parks are also based on an ecological theme. The Bioscope in Alsace focuses on exploring the planet (including the Okavango Delta and the Spice Route) and ecological campaigns. Underwater waste is collected using giant pincers and a survey is conducted on a mysterious animal threatened with extinction, whilst elsewhere you can head off to explore the species that live in the ocean depths. DéfiPlanet’, meanwhile, looks back at the last 50 years in a bid to understand environmental challenges and offer solutions. The Gibiloba parks in Les Yvelines and Moselle welcome children and take them on trails which introduce ecological issues, from waste recycling to endangered animals and the hazards of pollution.

All of these theme parks, however, aim to show that you can learn and have fun at the same time. First of all, they have of course all the requisite animals for a really family-friendly park, including calves, cows and ponies. And at Bioscope, learning about ecology is all about adventure. Visitors can take their pick from getting lost in the Dédaloscope to walking on water in a floating bubble. The Polar Explorer attraction reproduces the conditions of an ice floe but offers plenty of sliding fun too. DéfiPlanet’ has a tree-top trail with the longest zip wire in France (450 m) so that visitors can walk above the canopy accompanied by elves and sprites and assess their carbon footprint at the same time! At Terra Botanica this year a new film is being shown for the first time in Europe in the Mysterious Plants area. The Gibiloba parks feature giant mazes, ball pools, slides and trampolines. Just like their traditional counterparts, ecological theme parks also stage plenty of concerts, special effects, shows and 3D film screenings!

A park that is trying to deliver an ecological message must obviously set an example in terms of its own amenities and the way it operates. Everything, from gardening to waste collection, is geared to protecting the environment. At Terra Botanica, for example, visitors will not find a single synthetic product: plants are protected using integrated biological methods and a pond for harvesting rainwater means it can be reused for watering. So far at Eana, the grass has been kept short by a horse! Again at Eana, La Grande Halle gives visitors an opportunity to calculate their impact on the environment and the building itself was constructed in accordance with High Environmental Quality (HQE) standards. Its restaurant, L’Abbaye des saveurs, is run by a chef at the cutting edge of the “L’assiette de pays” movement which promotes food produced in the local area and seasonal products. A variety of accommodation is on offer: at DéfiPlanet’, for example, you can opt to sleep in a horse-drawn caravan, a chalet, a yurt or a tree house.

The innovations these parks offer require significant levels of investment but they are also benefiting from an increase in visitor numbers and support from their local authorities, which are often the original driving force behind them. They are taking a gamble for the future on people’s desire for something other than “mindless entertainment”, with the hope that it will prove as popular as the rejection of “mindless sunbathing”. The challenge seems feasible: the natural, authentic message communicated by these new parks reflects the spirit of the times and is helping them to differentiate themselves from their more established competitors.