Series are a gold mine for television throughout the world. The diversity and specific characteristics of French drama series mean they are now competing with their American counterparts. The audiences for these programmes are huge and the stakes, in terms of the influence they exert, are very high! 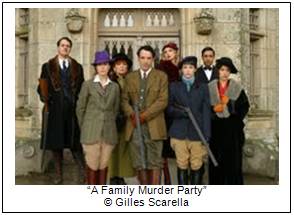 At first, television series were seen as a minor genre compared with the cinema. And then people realised that a succession of episodes provided an opportunity to develop more complex characters and situations, to make a regular date with viewers and create a harmless – but irresistible – addiction!

Television programmes of this kind now have their own events, such as Séries Mania, at the Forum des Images, or Séries-Séries, whose first event, held recently in Fontainebleau, looks set for a promising future. In fact, the event attracted almost 500 professionals, including 52 foreign representatives, and served to highlight the dynamism of French production.

Whilst American series seem to be marking time, French producers are developing strategies that are enabling them to overcome obstacles. The old six-episode seasons are a thing of the past: current productions aim for much longer series to meet the demands of foreign broadcasters. Even older series feature a significant number of episodes to ensure that they export successfully.

Co-productions are now fairly common and also guarantee international distribution. The Borgias was co-produced by France and Germany and filmed in English from the outset to target the United States. The Odyssey, currently being filmed for Arte in a co-production with Italy, has already been presold into around ten countries.

Fundamentally, French series have some major assets, starting with their diversity, according to Mathieu Béjot, General Manager of TV France International (TVFI), an organisation representing the main exporters of French audiovisual programmes: “Short comedies such as Bref (Anyway) or Un gars une fille (A Guy and a Girl) have been extremely successful. Camera Café (often produced locally, and sometimes in longer versions) has gone all round the world, from the Philippines to Portugal, Ukraine to Brazil and China to Vietnam, always with spectacular ratings. Comedies such as Clem, Fais pas çi fais pas ça (Desperate Parents) or Joséphine ange gardien (Josephine, Guardian Angel) are very popular in Europe. Series for children and young people also sell very well: Foudre (Summer Crush), Chante (Sing), Cœur Océan (Ocean Heart) and Seconde chance (Second Chance) are no longer broadcast in France but are still popular internationally.” It is also interesting to note that series that had disappointing audiences in France can prove popular abroad: Les Beaux mecs (Tony’s Revenge) and Rani, for example, have sold in 25 countries, including Spain and Brazil.

Alongside the still highly popular traditional detective series, such as Maigret (broadcast in over 40 countries), Navarro, Julie Lescaut, Les Cordier (The Cordiers), Profilage (Profiling), Enquêtes réservées (Special Investigation) and PJ (CID) are new-style detective dramas in the dense, fast-paced Canal + style, led by Engrenages (House of Games), Braquo (a big hit in Belgium) and Mafiosa (which was very successful in Poland), which have been bought by 100 or so countries. Historical dramas in period costume – one of the great specialities of French television – have enjoyed a brilliant revival, as Nicolas Le Floch and L’Epervier (The Sparrowhawk) have proven. “The mini-series La Reine et le Cardinal (The Queen and the Cardinal) is enormously popular in Eastern Europe,” notes Mathieu Béjot. “Adaptations of well-known literary works are very popular, particularly Chez Maupassant and Les Petits meurtres d’Agatha Christie (Agatha Christie’s Little Murders).”

As the General Manager of TVFI notes, “one of the obstacles to series distribution is that people want them to be local to them.” As a result, foreign broadcasters often buy French series and adapt them for new audiences. A new version of Clara Sheller, for example, was produced in Germany and XIII became a super-production filmed in the United Kingdom. The Americans have signed up to Engrenages (House of Games), Braquo and Les Hommes de l’ombre (Men of Shadows). They have even adapted Hénaut Président (The Handlers).

That said, a picturesque setting can also be an advantage, as seen in the exceptional success of Sous le soleil (broadcast in 130 countries under the title Saint-Tropez). The people of Marseille who feature in Plus belle la vie (A More Beautiful Life) have attracted ten or so other countries. In general terms, series that export successfully are the ones that acknowledge their French roots rather than trying to copy their American counterparts. A Navarro, with his intimate knowledge of Parisian bars, is a refreshing change! Les Hommes de l’ombre, with Nathalie Baye as a presidential election candidate, was bought in its original version by Hungary and Finland. Just as New York District taught us all about the American judicial system, Engrenages has unravelled the mysteries of the French justice system, creating quite a buzz in the United Kingdom. “Programmes like Inquisitio or Les Bleus (The Blues) describe the reality of life in France. Le Sang de la Vigne (The Blood of the Vine), with Pierre Arditi, gives people the chance to explore France’s landscape and culture. These series help sell the country!” says Mathieu Béjot enthusiastically.

The millions of viewers they attract mean television dramas have the ability to exert a significant influence. The Institut français, which is responsible for French cultural activities abroad under the auspices of the Ministry of Foreign Affairs, is well aware of it. As a result, a number of promotional campaigns have been organised, in particular in New York, Beijing (with a week of broadcasts in cinemas) and London, where the Institut français ran the “Totally serialized” event last January. At the end of the day, what matters is showcasing France, especially to the main audience for television series: young people.