Just two months after the official launch, the Consulate General’s Facebook page already topped 500 fans. A first step in the development of this new communication tool, meant to become a privileged source of information on France’s activity in Hong Kong and Macau. 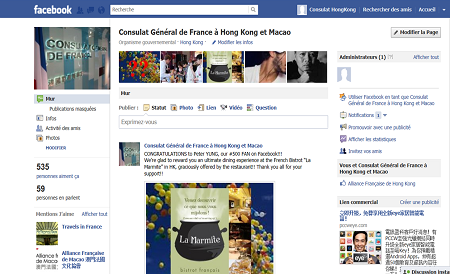 It has been a pretty successful initiative, as more than 500 people (Hong Kong, French or foreign) have already chosen to follow the Consulate’s regular updates. In order to mark the event (and to make some buzz, of course!), the Consulate General has decided to reward the lucky 500th fan with an ultimate dining experience at the French Bistrot La Marmite in Hong Kong, graciously offered by the restaurant. 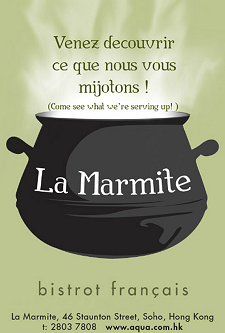 The creation of the Consulate’s Facebook page falls within the scope of the 2011 policy of the French Ministry of Foreign and European Affairs, which encourages French Embassies and Consulates around the world to increase their presence on social networks. The call has been heard since more than 60 of them are now on Facebook, and more than 30 are on Twitter. This positions France’s foreign representative offices at the 3rd place in the world for their presence on social networks, behind their American and British counterparts.