Home > The Consulate General > News > Consulate news > Impressionism and Fashion, a joint French and US exhibition

Impressionism and Fashion, a joint French and US exhibition

Organised by the Musée d’Orsay in Paris, the Metropolitan Museum of Art in New York and the Art Institute of Chicago, the exhibition Impressionism and Fashion promises to be one of the major cultural events of the autumn in Paris and of the coming year in the United States. Bringing together these two high points of French culture, which arouse the keenest interest abroad, is a rewarding idea! 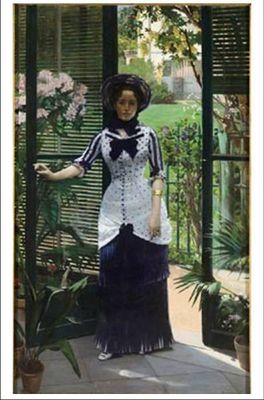 French fashion and Impressionism are highly valued all over the world, particularly in the United States. So it comes as no surprise that the request for an exhibition that brings the two together should come from across the Atlantic, specifically from the Art Institute of Chicago. The Musée d’Orsay, the chief repository for the work of the Impressionists in Paris, responded positively without hesitation. In France, every exhibition devoted to these artists has met with enormous success. Last year, Paris in the Time of the Impressionists at the Hôtel de Ville drew 150,000 visitors. This year, the exhibition Berthe Morisot: The Impressionist Painter at the Musée Marmottan Monet was extended because of high visitor numbers. And people still remember the queues to see Cézanne and Pissarro at Orsay, and Renoir then Monet at the Grand Palais – exhibitions in which there was considerable involvement from several American museums.

In preparation since 2009, the new exhibition, Impressionism and Fashion, at the Musée d’Orsay from 25 September to 20 January, will then travel on to New York, to the Metropolitan Museum of Art (MET) from 19 February to 27 May 2013, and to the Art Institute of Chicago from 30 June to 22 September 2013. It brings the paintings of the Musée d’Orsay, of course, together with others from partner American museums, but also from elsewhere, such as Manet’s Nana on loan from the Hamburger Kunsthalle (Germany). Another exceptional loan is Renoir’s La Loge (The Theatre Box), belonging to the Courtauld Institute of Art in London. Chicago is sending, among others, Caillebotte’s superb Jour de pluie à Paris (Paris, A Rainy Day) and the MET Le Portrait de Mme Charpentier et de ses enfants (Madame Georges Charpentier and Her Children), which is something of an event for France, since this painting by Renoir has not been seen here for 40 years.

Keen to represent “modern” life, the Impressionist painters depicted citizens going about their daily activities, at work and at play, in town and in the country. Monet and Degas in particular are perfect illustrations of the Parisian “flâneur”, the sophisticated and casual observer of his contemporaries. The portrait becomes the snapshot of a man or woman in their everyday surroundings.

In doing this, the Impressionists have left us an account of the fashions in clothing of the years between 1860 and 1880, a time of great change. “This dynamic period saw a rise in commerce with the opening of department stores, a proliferation of labels, a growth in textile manufacturers and the creation of numerous couture houses that became famous abroad, especially among rich American clients,” points out Françoise Tétart-Vittu, scientific adviser to the exhibition for the costumes. “The Impressionists, who came from the middle classes, painted their families and friends; their female friends, often milliners or seamstresses, who made their clothes, or, for the more wealthy of them, ordered them from the best fashion designers.”

This aspect of the exhibition has been designed with the participation of the Musée des Arts Décoratifs and the Musée de la Mode de la Ville de Paris, which have provided half of the costumes on display. The other half come from private collections or from provincial museums devoted to costume such as those in Château-Chinon, Argenton-sur-Creuse and Vesoul. The context is provided by engravings, fashion journals and photographs taken from the extensive Disdéri collection of the Musée d’Orsay. “Costumes and accessories, hats and shoes are exhibited around the galleries under themes such as “reception” or “the outdoors”,” explains Françoise Tétart-Vittu, who makes it clear that these are not the ones represented in the paintings! So you will not see, next to the works of art, the white dresses worn by Berthe Morisot in Manet’s Le Balcon (The Balcony) or by Suzanne Valadon in Renoir’s Danse à la ville (Dance in the City), any more than the suit worn by the Marquis de Miramon painted by Tissot or those of the figures in Monet’s Déjeuner sur l’herbe (The Picnic). But there will be plenty of trailing skirts, short drawstring dresses and gathered poufs, and then you will in fact see the genuine striped and polka dot summer dress worn by Prospérie de Fleury in the painting by her husband Albert Bartholomé Dans la serre (In the Greenhouse)… “The comparison between painting and fashion promises to be an interesting one, with one or more dresses in each section, as well as accessories that relate to the paintings,” remarks Philippe Thiebaut, general curator at the Musée d’Orsay and curator of the exhibition, who is keen to stress that “men’s fashion is on display too!”

You only have to take a look at the list of sponsors, which include LVMH and Christian Dior, to realise that we are dealing here with the quintessence of elegance and the French spirit... And with opera designer Robert Carsen as exhibition designer and artistic director, there remains no doubt that the overall effect will be one of spectacle and glamour. Documentary information, fashion shows and films, a literary café, concert and show: these associated events will transform this exhibition into an event that cannot fail to draw the crowds, in Paris and in the United States.