Parents today demand safe, high-quality products for their children. A back-to-basics approach that is proving a resounding success for the French manufacturers who specialise in traditional toys, and delighting their enthusiasts. 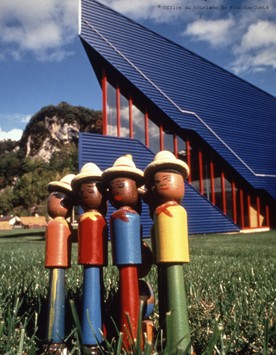 Toys have come through the economic crisis unscathed. Christmas accounts for 60% of toy sales and is looking promising again this year. Overall, the market will have remained stable or even increased slightly in 2012, after two very good years, with an increase of 3% in 2010 and 6% in 2011. Excluding video games, almost 250 million toys were purchased last year, generating turnover of €3.23 billion. The French market is the second largest in Europe after the United Kingdom. Its performance can be explained in part by the country’s fertility rate, which puts it in second place amongst European Union countries.

Toys are not just goods like any other. We look to toys to educate and develop children’s personalities and social skills and we also attribute a high emotional value to them. There can be no doubt that we are witnessing the return of the superhero, the development of toys connected to the internet with multiple functions and the ongoing expansion of video games. At the same time, however, it was clear from the last Kidexpo show in Paris that educational toys are gaining ground on gadgets. The strongest growth is being seen in toys for babies, timeless construction toys, puzzles, outdoor games and sports and dolls, which outstrip electronic games by far.

The main focus of demand is on quality, strengthened by the introduction of a new European directive. The French toy federation emphasises the tremendous appeal of well-made toys. One of the characteristic signs of the importance placed on toy purchases is that it is specialist shops that are coming out top of the sales outlets, ahead of the major retailers and online stores. The situation bodes well for French manufacturers. Toy exports, which represent 33% of sales, are increasing, as demand for goods “made in France” continues to grow. Their main advantages are their acknowledged expertise in traditional games; high-quality manufacturing that complies with safety standards; and environmental awareness, expressed through a return to simplicity and natural raw materials. Skittles, rocking or pull-along toys, ride-on toys, cup-and-ball games and croquet are all the rage.

The Jura region on the Swiss border is the home of traditional toys. The timber industry developed there in the 19th century, followed by the decisive turning point of celluloid and finally, the remarkable age of plastic in the famous “Plastic Valley”, the largest focal point of the plastics industry in Europe. Know-how in the region is extremely high. Market leader Smoby is based there and Flaquet et Cie tractors, Ecoiffier building bricks and role-play toys, JeuJura wooden chalets and blackboards, Monneret table football tables, and Janod puzzle cubes and figurines are all made in the region.

France’s toy industry has nevertheless also had its challenging times. The last French soft-toy factory, Blanchet, almost went bankrupt before its top-of-the-range positioning found favour again and rescued it. Other manufacturers have had to come to terms with the demands of the international market by joining forces and investing in modern production methods. Meccano, which has a well-established reputation for its metal and plastic construction toys, has kept pace with changes in the sector by relocating and investing in its historic factory in Calais.

Tradition does not exclude innovation. In the Jura, products are designed and tested with the major research centres. French manufacturers are updating their ranges and keeping up with the latest trends, especially in relation to sustainable development, for example using environment-friendly timber and water-based colours.

So anyone who is resistant to electronic games has plenty to choose from, with little cars, fire engines, garages, prams, farms, tea sets and dolls houses increasingly taking centre stage. And babies are still sucking on Sophie the Giraffe, who has celebrated her 50th birthday and can now be found in nurseries on the other side of the Atlantic too.

The attraction of traditional toys is part of a significant trend. Some of the great classics are being revived and there are numerous websites dedicated to the toys of days gone by. Nostalgia enthusiasts are scrambling over Bella dolls, Petitcollin baby dolls, shields, wooden swords and the Vilac hobby horse, Clergé cranes, Educalux wooden pull-along ducks and dogs, Starlux lead soldiers, Clairbois rocking horses, electric trains, metal boats and, of course, Nounours soft toys. A craze that can perhaps be explained by our desire to delight our children by rediscovering our own childhoods and passing on a tradition.