Richard Strauss’ compositional output includes some of the most sensuous and virtuosic music ever written for the oboe. Recognized throughout the world as one of the best oboe soloists of his generation, François Leleux is a supreme advocate for Strauss’ beautifully crafted oboe concerto with its long and breath-defying melodies. Tchaikovsky’s Serenade for Strings, another true heart-on-the-sleeve work, provides the perfect prelude to Strauss’ romantic outpourings along with the immensely charming Oboe Concerto by Cimarosa. 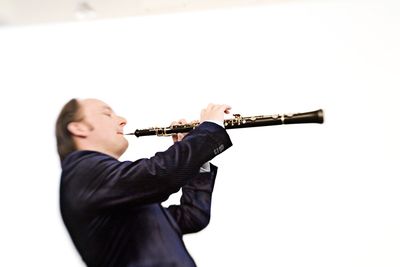 An oboe masterclass by François Leleux will be also held on 19 Nov: http://www.ccohk.com/images/archive/1213/Francois-Leleux-Flyer.pdf

Recognised throughout the world as the best oboist of his generation, François Leleux enjoys an international career appearing with major orchestras and at important venues and festivals performing repertoire from the baroque to newly commissioned works. François has appeared at the Berlin Philharmonie with Deutsches Symphonie-Orchester Berlin, the Vienna Konzerthaus with Vienna Symphoniker, Théâtre des Champs-Élysées with Orchestre National de France, at Bunkamura with the NHK Symphony Orchestra and at the Lincoln Center as part of the Mostly Mozart Festival. He has worked with leading conductors such as Pierre Boulez, Mariss Jansons, Sir Colin Davis, Myung-whun Chung, Daniel Harding, Thomas Dausgaard, Wolfgang Sawallisch and Alan Gilbert.

From season 2012-13 Francois Leleux will be Artist in Association with the Ensemble Orchestral de Paris . François Leleux began his professional career when, aged eighteen, he was appointed Principal Oboe at Opéra de Paris. Three years later he won the solo position in Bayerischer Rundfunk Symphonieorchester, a position he held until 2004. His musical activities are now split between solo appearances, playing/directing, chamber music, recitals and concerts with the Chamber Orchestra of Europe, of which he was appointed Principal Oboe in 2003. He is also a Professor at the Hochschule für Musik und Theater München.

He has a commitment to expanding the oboe’s repertoire, and has had many new works commissioned for him by composers such as Nicolas Bacri, Thierry Pécou, Gilles Silvestrini, Eric Tanguy, Thierry Escaich, Giya Kancheli and Michael Jarrell. Last season he premiered a new concerto titled The Enchanter written by Albert Schnelzer and jointly commissioned by the Swedish Chamber Orchestra and the Scottish Chamber Orchestra. The work received warm praise in the press with one critic writing, “His concerto held me gripped…The “Enchanter” of the title is Leleux himself, and it’s a fitting tribute to his spellbinding playing. He turned the oboe into a multi-dimensional character, singing, dancing and leaping through his music.” François has also made his own transcriptions of arias from Mozart’s Don Giovanni and Die Zauberflöte which he has recorded with Camerata Salzburg for Sony.

François Leleux has an exclusive recording contract with SONY Classical. So far, as part of this contract he has released three CDs – chamber music with Lisa Batiashvili, violist Lawrence Power and cellist Sebastian Klinger: J.S.Bach with the Chamber Orchestra of Europe and Mozart with Camerata Salzburg. His last release for SONY Classical featured Strauss’s Oboe Concerto recorded with Swedish Radio Symphony Orchestra and Daniel Harding and Serenade for Winds performed with the ensemble Paris Bastille. “The Charm of the Oboe” is currently in preparation for release in spring 2012. Alongside Francois Leleux, the recording will unite some of the most eminent chamber musicians in the field: Emmanuel Pahud, Paul Meyer, Gilbert Audin and Radovan Vlatkovic