Home > The Consulate General > News > Consulate news > Awarding of the Nobel Peace prize to the European Union Statement by (...)

Awarding of the Nobel Peace prize to the European Union - Statement by Bernard Cazeneuve (October 12, 2012)

The European Union has been awarded of the Nobel Peace Prize on October 12, 2012. 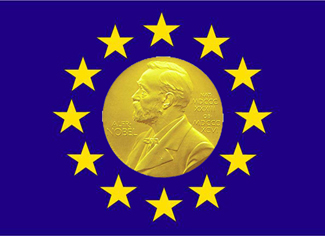 The Nobel Committee has just honored the European Union by awarding it the Nobel Peace Price. This honor goes to a unique, historically unprecedented political entity.

Indeed, never have nations and their people been so peacefully united.

For centuries, Europe was devastated by bloody conflicts. Traumatized by the two World Wars and the tragedy of the Holocaust, the Union’s founding fathers envisioned a community of shared values in which peace, human dignity and human rights would be central to a process of political organization. It is a space of freedom. Reconciliation and the friendship between France and Germany – major actors in these tragedies – were the engines of this construction process.

After consolidating peace among its founding members, the European community, through the opportunities it offered, became a powerful factor for peace among the nations of Central and Eastern Europe that had just regained their freedom. Even today, the prospect of a rapprochement with Europe contributes to peace and stability, notably in the Balkans.

This Nobel Prize honors Europe’s work for peace since its establishment. It also honors Europe’s beneficial actions on the international stage. The Union strives for the peaceful settlement of disputes, respect for international law and human rights. It is the leading contributor to development aid. The Nobel Prize offers additional encouragement to Europe to expand its efforts. This is reflected in our wish to strengthen exterior policy, common security and the Common Security and Defense Policy.

The process of European integration is an inspiration to other continents, where regional organizations are emerging that also contribute to peace and prosperity.

To achieve its efforts on behalf of peace and brotherhood among peoples, Europe must strengthen its economic and social ambitions, notably with respect to the current economic crisis which is generating social tensions. To that end, “solidarity-based integration” will allow strengthened European Union institutions to better foster solidarity among the people of Europe.