The French International School (FIS) has attached great importance to disseminate anti-drug message to its students. Since 2011, the French Police Liaison Desk in Hong Kong and Macau has organised anti-drug talks and activities for students of the French International School with the Hong Kong Police Force and the Correctional Services Department. This year, the ‘Anti-Narcotics Day’ was held at Happy Valley campus of FIS on the 16th of May 2014. 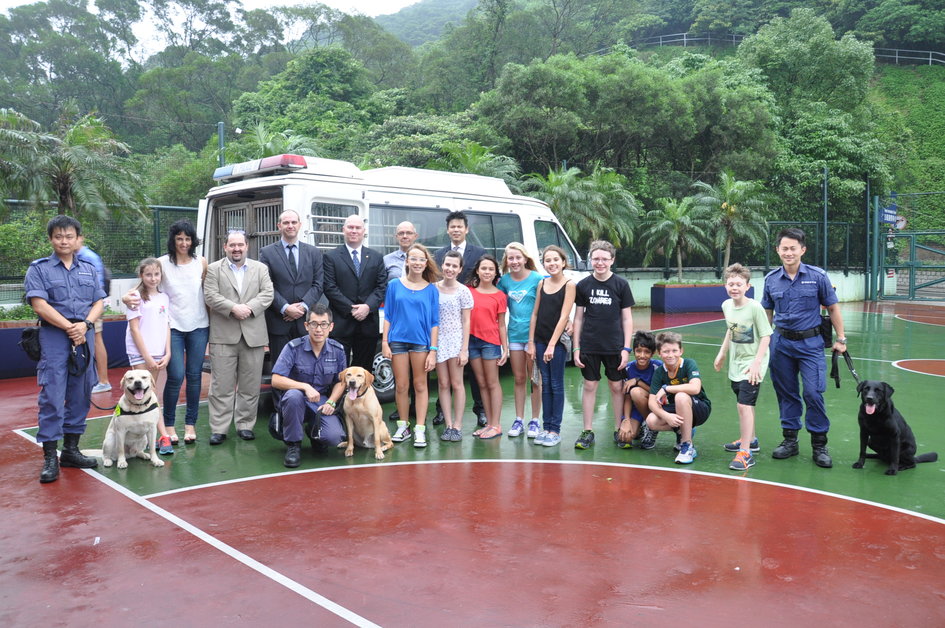 Mr. Jean-Christophe Marten-Perolin took photos with students and appreciated the Police Dog Unit to take part in the exercise.

Mr. Jean-Christophe Marten-Perolin, Attaché of Police of the French Consulate has collaborated with Mr. Cheng Chun-kit, Inspector of Police to deliver four sessions of preventive educational talks to junior secondary students over the past four years. They introduced the common type of psychotropic substance abused by young people, criminal justice systems of France and Hong Kong with regard to drug-related offences and use examples to implant knowledge on common drugs, dispel misconceptions and address incorrect knowledge about the legal consequences of drug offences. 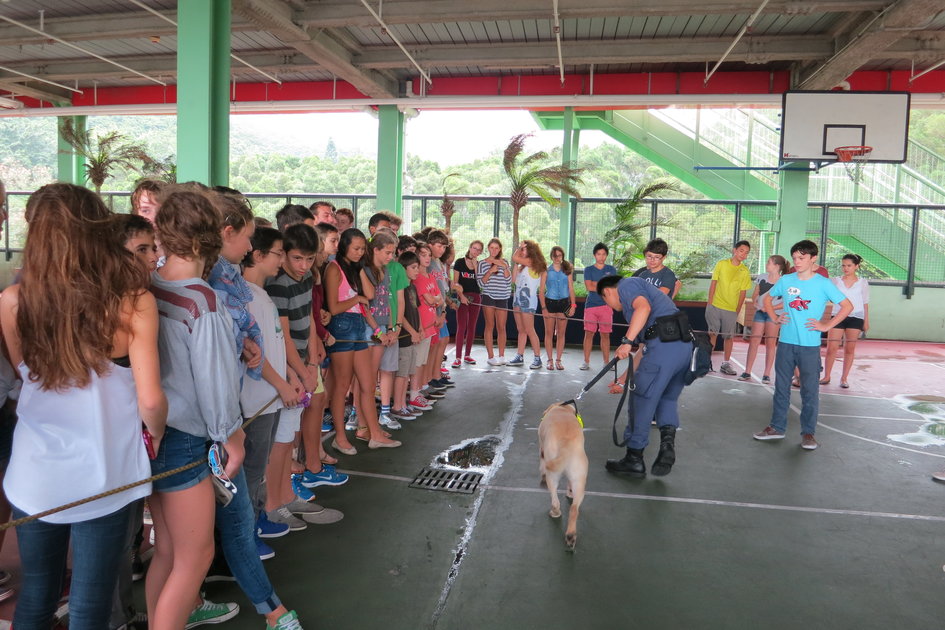 The drill exercise of police drug-sniffing dogs and their handlers attracted huge attention in the school.

A highlight of the programme was police sniffer dogs to search for narcotics in school playground. Three Labrador retrievers and their handlers demonstrated the way to locate drugs from a stranger. The drill received widely attention and many students asked for taking photos with the dogs and took part in the exercise. 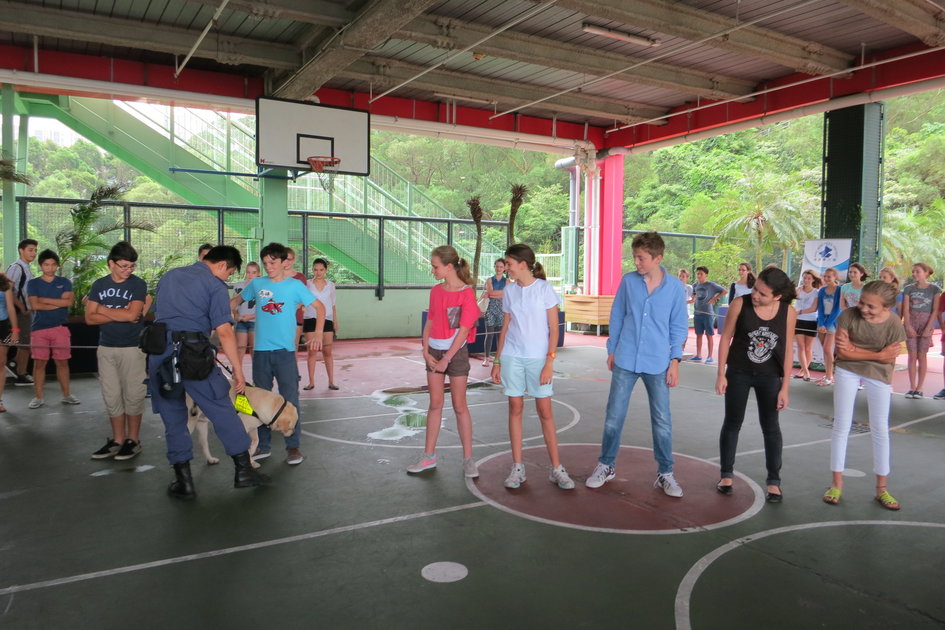 Labrador retrievers have superior smell capacity compared with other breeds and is trained to search of drugs.

On preventive education, Mr. Fong Kung-fu, the Public Education Officer of the Rehabilitation Pioneer Project of the Hong Kong Correctional Services Department presented a video to introduce daily prison life and rehabilitative services for juvenile offenders. The disciplines that prisons tried to install in criminals were similar to the discipline in military units. This is a kind of social training to prepare criminals for a life of productivity when released. 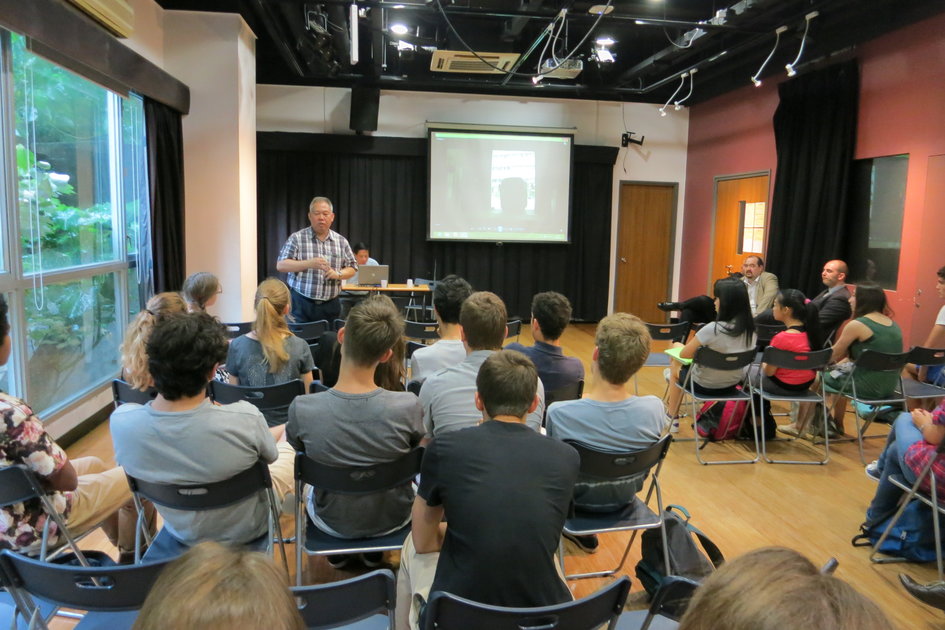 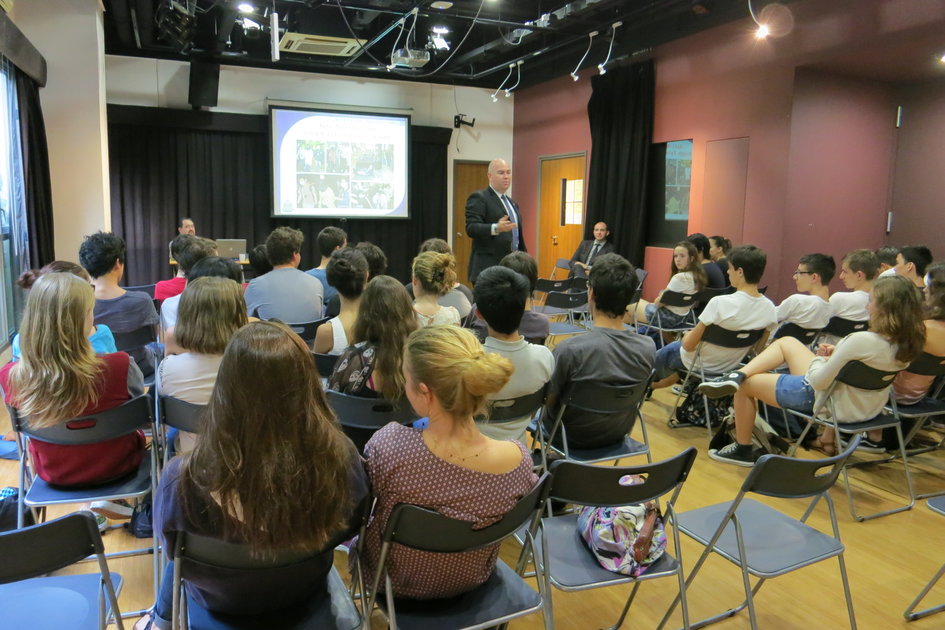 Mr. Jonathan Close delivered a preventive talk to students and explained the serious legal consequences of taking or trafficking drugs in Hong Kong.

On law enforcement, the Police School Liaison Programme of the Hong Kong Police plays an important role in the coordination among the Police, teachers, school management and the community, and provides a platform to support anti-drug and fight crime efforts in schools. Ms. Sabrina CHENG, the Police School Liaison Officer of Wanchai District provided a talk to parents of FIS. She emphasised police districts and the Narcotics Division of the Hong Kong Police are committed to combating drug activities on campus or those involving students. 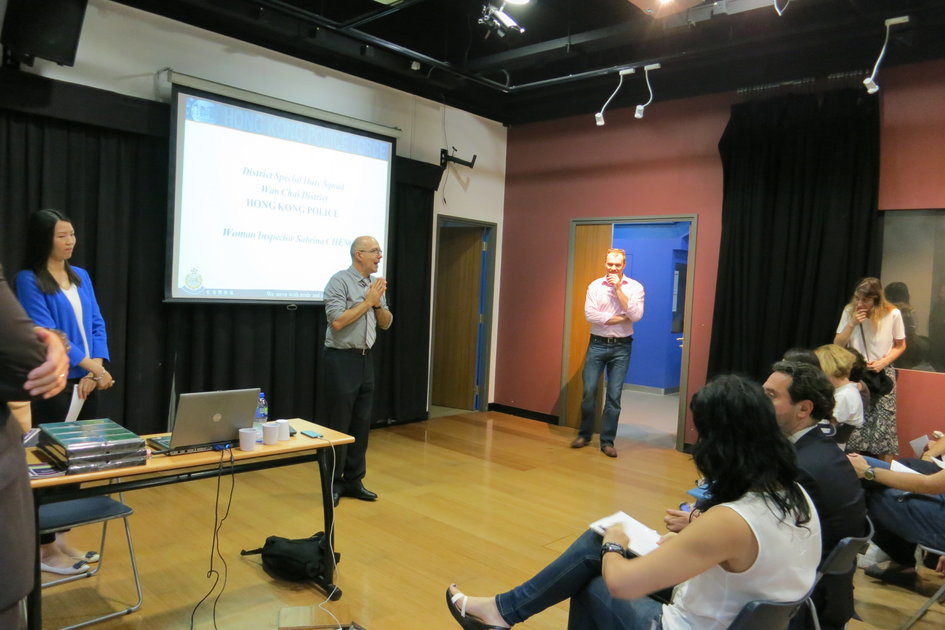 Mr. Christian Soulard, the Headmaster of the French International School welcomed all concerned parties to attend the educational talk.

The above programmes are aimed to facilitate the healthy development of the youth, thus helping them resist the temptation of drugs and other undesirable behaviours. Likewise, parents are equipped with drug knowledge and skills to identify and handle youth drug problems, whereas they can take early intervention as soon as possible.

Mr. Jean-Christophe Marten-Perolin, Attaché of Police of the French Consulate, thanked the enormous support of the Hong Kong Correctional Services Department, the Hong Kong Police Force and their colleagues for coordination of this programme.

Ms. Sabrina Cheng delivered a talk to parents of FIS. She expressed that the Hong Kong Police has adopted a holistic strategy to deal with drug cases in schools.