For the second year running, in 2015 French films sold more tickets abroad than on the domestic market. The French Ministry of Foreign Affairs and International Development (MAEDI), together with its operators and audiovisual and cultural network, contribute effectively to disseminating French cinema abroad.

The year 2016 also started with excellent figures for French cinema abroad, which were announced by Unifrance: 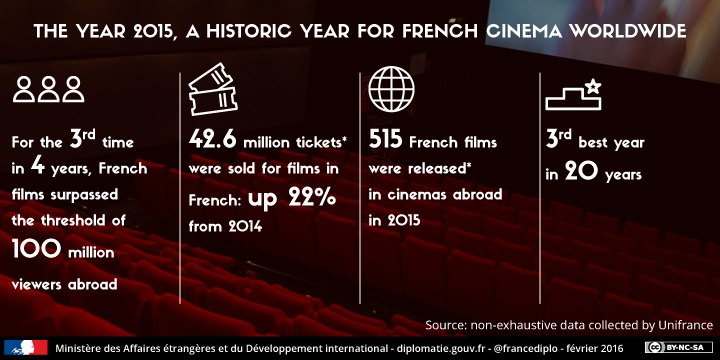 For the 3rd time in only 4 years, French films surpassed the threshold of 100 million viewers abroad. With takings of €600 million at the box office abroad, in 2015 French cinema celebrated its 3rd best foreign year in over 20 years. 20% of those tickets were for animation films. 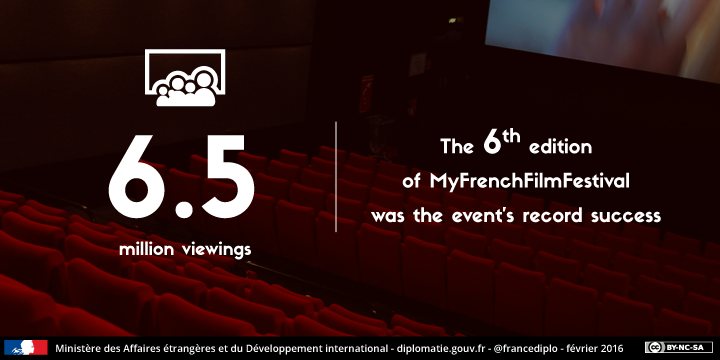 The year 2015 was crowned with success

As the key driver of France’s attractiveness, the success of French film exports is a major asset for economic diplomacy. The year 2016 is again expected to highlight the diversity of French cinema, notably with the documentary Seasons by Jacques Perrin, the animation film Ballerina, the comedy The Visitors 3, the thrillers Blood Father and Shut In by Jean-François Richet, as well as Monsieur Chocolat by Roschdy Zem, Cézanne et moi by Danièle Thompson, Being Seventeen by André Téchiné, Personal Shopper by Olivier Assayas, A Woman’s Life by Stéphane Brizé, Planetarium by Rebecca Zlotowski, and Mal de pierres by Nicole Garcia.