Home > Culture, Education and Science > News > Education and French Language > Welcome to the "Promotion Napoléon" of the French language scholarship (...)

Welcome to the "Promotion Napoléon" of the French language scholarship awardees! [fr]

The 14th batch of linguistic scholarship awardees has been for the first time given a name. A name deeply rooted in the history of France to pay a tribute to the commitment of the Hong Kong Chapter of the Legion of Honour, whose generosity has helped to co-finance nearly 1000 scholarships since the program’s inception in 2006.

An award ceremony took place on December 2, 2019 under the patronage of the Consul General, Mr. Alexandre Giorgini, and the Vice President of the Hong Kong Chapter of the Legion of Honour, Mr. Paul Clerc-Renaud.

The ceremony was set for rewarding the 68 students from Hong Kong and Macao who, in the summer of 2019, went to France during four weeks with the sponsorship of the linguistic scholarships. Jointly funded by the Consulate and the Hong Kong Chapter of the Legion of Honour, these scholarships are an essential incentives each year to encourage the learning of French among Hong Kong and Macanese youth. About fifty students were present to receive their certificate alongside their teachers. 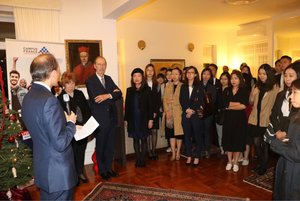 This year, the ceremony was under the banner of the Emperor Napoleon to commemorate a double anniversary - the 250th anniversary of his birth and the 215th anniversary of the founding of the First Empire - but above all a long-standing commitment: the one of the Hong Kong members of the Legion of Honour for the promotion of the French language and cultural diversity.

Several university senior management members also honoured us with their presence, such as the Vice-president of the Baptist University, Dr. Albert Chau; Vice-president of City University, Prof. Horace Ip; and the Dean of the student affairs of the University of Hong Kong, Dr. Eugenie Leung. Their presence marked France’s attachment to the internationalization of Hong Kong universities, as well as to their open-mindedness, which is a guarantee for the quality of the academic system. 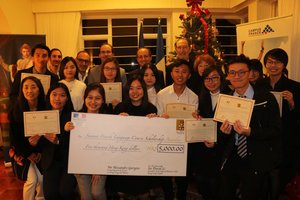 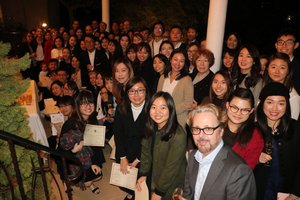