Towards a better understanding of bioenergy production 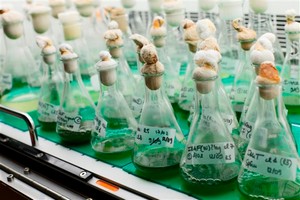 The HélioBiotec platform has just been opened at the Commission for Atomic and Alternative Energies (CEA) centre in Cadarache (Bouches-du-Rhône). Researchers at the centre work in conjunction with laboratories and industrialists to study and optimise the biological mechanisms of photosynthetic microorganisms, which have the capacity to produce, naturally, molecules which contain high levels of energy. Cultivated in large quantities, these organisms could in future produce so-called third-generation biofuels.

A disappointing first generation of biofuels

First-generation biofuels, the only ones currently on the market, are produced using plants such as beets and certain oil-producing crops. Their benefits are significantly limited, however, by the fact that they consume large amounts of land, water and inputs. Second-generation biofuels are currently being assessed, particularly in terms of their profitability and environmental impact. These are produced by converting biomass into synthesis gas, which is then converted into a liquid fuel (thermochemical technique). They can also be produced using microorganisms to digest biomass to generate ethanol (biological technique).

Some microalgae and cyanobacteria* can, under certain conditions, use photosynthesis to produce hydrogen, an energy source which can be used directly with fuel cells. These microorganisms also produce hydrocarbons and lipids, which can be converted into biodiesel. Algae, for example, can store up to 50% of their dry weight in lipid reserves. These organisms are interesting in terms of energy because of their rapid growth and very high surface yields: some species could produce 10 to 20 times as much biodiesel as cultivated crops such as rape or sunflower for the same area.

The research carried out in Cadarache over the past ten years or so is designed to identify the most promising organisms, study their metabolism and optimise biological mechanisms to increase the productivity of compounds with high levels of energy. The development of the HélioBiotec platform since 2008 reflects the steady progress made in the research. “Since then, the laboratory has equipped itself with cutting-edge tools, which have in turn led to the opening of HélioBiotec,” explains Gilles Peltier from the Bioenergy and Biotechnology of Bacteria and Microalgae Laboratory (LB3M). “The platform now has a range of sophisticated tools which can be used to pinpoint which of the many microalgae we study have beneficial characteristics, examine the quality of the elements they produce, such as lipids, and even cultivate those algae under controlled conditions.” _ The joint platform, hosted by the Bioenergy and Biotechnology of Bacteria and Microalgae Laboratory at the CEA site in Cadarache, is establishing partnerships with both academic institutions and private-sector organisations. There are between 20 and 25 researchers, engineers and technicians on site, 13 of whom are permanent staff from the CEA and CNRS (French National Scientific Research Centre), who work on projects funded by the European Union or the French National Research Agency (ANR). “We also have bilateral cooperation agreements in place with foreign laboratories such as the NREL (National Renewable Energy Laboratory) in the United States, which is funded by the US Department of Energy and aims to develop renewable energies. We also respond to specific questions from industrial companies such as GDF-Suez and Fermentalg.”

“We are trying to identify and overcome the obstacles that are currently limiting the applications of microalgae in profitable energy production. Our current research projects cover areas such as hydrogen production, lipid production and lipid excretion routes. Microalgae cultivation technologies tend to produce a very dilute form of biomass (a few grams per litre), which means dealing with large quantities of water. Excreting lipid compounds into the environment would help us to avoid stages which consume large amounts of energy. We are also working on the quality of lipids to produce shorter-chain products closer to the composition of kerosene.” All these are avenues which could, in the medium term, result in the development of so-called third-generation biofuels.

In a context in which climate change and increasing energy prices have become objective realities, biofuels, which produce lower levels of greenhouse gas emissions compared with traditional fuels, currently represent an immediate and efficient way of combating climate change and reducing our dependence on oil in the transport sector, which is the main source of CO2 emissions. As a result, they offer a means of stabilising fuel prices and increasing the security of the energy supply in France.

* Cyanobacteria are a sub-category of bacteria capable of converting light energy into chemical energy, which can be used by the cell.