Towards a French cloud-computing service

Remote computing is all the rage. It is a market that promises to grow exponentially over the next few years and the French Government has the issue firmly on its agenda, with a view to setting up a major national operator on a European scale. 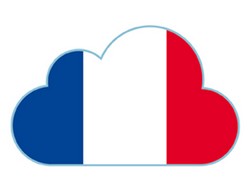 Cloud Computing does not make a lot of sense as an expression. So it is as well to look carefully at a concept that seems to have its future all mapped out. It involves transferring the storage and processing of computer data, usually managed on local servers, to remote servers on the internet. These data remain, however, physically firmly on the ground! They are concentrated in huge data processing centres, like an immense digital factory filled with computer equipment, the size of which is equivalent to ten times that of a football field.

This delocalised computing is aimed at governments, administrations and businesses as well private individuals – the personal cloud – allowing them to free up space on their hard disks from address books, photos, music, videos and documents. It will bring an end to the race for ever-larger memory capacities for computers, cameras, Mp3 players, smartphones and digital tablets.

In the world of work, cloud computing is defined as an on-demand computing system. Businesses that externalise their computing have access to a range of applications (e-mail, human resources, customer services, etc.). Computer processing power is rented online, according to the needs of the business. You just have to subscribe in order to be able to access and pay for the services you require. In comparison with traditional models, it enables companies to reduce their infrastructure costs by sharing equipment and developing shared applications.

It is not, strictly speaking, an innovation: cloud computing uses tried and tested technologies. And this is somewhat reassuring for the user, even if it is clear that to guarantee the reliability of the services and ensure that the data remain accessible in real time, the infrastructure is going to have to be adapted to the increase in demand. For although the revolution under way may not be a technological one, it certainly is an economic one. This business sector promises a dizzying future, with an expected annual growth rate of 30%. The world market is likely to reach $270 billion in 2020, $118 billion of it institutional expenditure.

In France, even more than elsewhere in Europe, businesses are taking a keen interest in cloud solutions. According to a survey by market research company Markess International, one in three French companies is expected to be using at least one of the cloud computing services this year. As a result, it is estimated that the market in France might reach €2.7 billion, an annual rise of 21%.

It is not at all surprising in such a context that software publishers, computer manufacturers and telecoms operators are rushing into this exciting field. While France has web-hosting service providers, such as OVH for example, the American giants of the sector are omnipresent. The French Government has decided to be proactive by launching a call for proposals as part of its Andromède programme. Two consortia have been established: one bringing together SFR and Bull, aimed particularly at SMEs and large groups; the other combining Orange and Thalès, aimed at businesses and institutions mostly in the public sector. In order to promote the development of both projects, the public Caisse des Dépôts, a long-term investor serving the general interest and the economic development of France, has invested €75 million in each of them.

Setting up a national cloud computing service that conforms to French and European regulations on data storage, confidentiality and security is a matter of strategic importance. The aim of Andromède is, among other things, to give companies as well as public-sector institutions the assurance that the confidentiality of their data will not be compromised by the application of decisions taken in foreign jurisdictions. Confidentiality is of particular importance to national defence, government and innovative companies, etc.

Geographical proximity between operators and clients is a decisive factor in establishing a genuine relationship of trust. In addition to the data processing centres that already exist in France, those planned under the Andromède project will soon be up and running. Their considerable volume of activity should lead to a fall in prices, which will result in improved competitiveness for France. The commercial offerings of both consortia are due to be announced at the end of 2012 and they should open the doors to the European market, estimated to reach €15 billion by 2016.