Home > Culture, Education and Science > News > Research and Higher Education > The cooperation between the Hong Kong University and Institut Pasteur will (...)

A signature solidifies the successful cooperation between the University of Hong Kong and the Institut Pasteur for a further 10 years.

The common history of Hong Kong and the Institut Pasteur, the renowned private non-profit foundation which has became a world leading institution for research and education in public health, spans 130 years. This history, rich and successful, highlights the distance covered together by Hong Kong and France to enhance the development of scientific knowledge and the betterment of medicine.

In 1887, the “father of microbiology” Louis Pasteur founded the institute named after him in Paris. The same year, the “father of tropical medicine” Sir Patrick Manson founded the Hong Kong College of Medicine of which Dr Sun Yat-sen became one of its first graduates. In 1894, the first “pasteurian” arrived to Hong Kong at the time as the most severe epidemic of plague the region had ever seen. It was Alexandre Yersin, a disciple of Louis Pasteur. He discovered the bacteria responsible for the disease, still known after his name: Yersinia pestis. On a lighter note, one could also remember the year 1978, when researchers from the University of Hong Kong worked with scientists from the Institut Pasteur to isolate a microorganism threatening marine mammals in the well-known Ocean Park.

The long-term partnership between the University of Hong Kong and the Institut Pasteur formally began in 1999. The two prestigious institutions, supported by the benefactor Dr James Kung, agreed to jointly establish a research laboratory focusing on bacterial genomics. In 2003, the SARS (Severe acute respiratory syndrome) outbreak was a very traumatic experience for Hong Kong and profoundly changed the perception of risk from infectious diseases. Research in the laboratory has since focused on the investigation of respiratory and emerging viruses that are a public health threat for Hong Kong and the region. Malik Peiris, the current co-director of the laboratory, was notably involved in the identification of the virus causing SARS. This achievement has strongly contributed to his global renown among the scientific community. 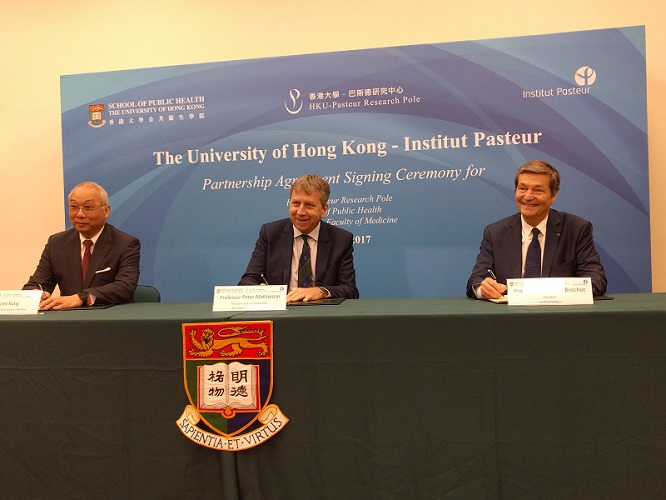 Since then, numerous studies conducted by scientists at HKU-Pasteur Research Pole and their colleagues have deepened the knowledge on viruses at the centre of public health concerns – seasonal flu, avian and swine flus, dengue virus, coronaviruses responsible for SARS and MERS (Middle East respiratory syndrome) – and develop safe and accurate diagnostic tests. Recently, Zika virus has become another target for the laboratory, which has lead to new projects in order to support the Pasteur network’s efforts to tackle the current outbreak. Throughout its history, HKU-Pasteur Research Pole also pioneered excellent teaching programs and has become an essential regional education hub, training the next generation of scientists.

Firmly integrated in the Institut Pasteur International Network – 33 institutes located in 26 countries over the world – HKU-Pasteur Research Pole must nonetheless secure its future as a prominent centre fighting infectious diseases through research and education. On this prospect, the signing of the partnership renewal between the University of Hong Kong and the Institut Pasteur with a 10-year agreement on Friday 2 March 2017 is a considerable event. Previous agreements had run for 5-year periods. This emphasizes the common will of the two institutions to solidify their relationship through HKU-Pasteur Research Pole, and ensures a promising and enduring future for the laboratory.

The Consulate General of France in Hong Kong and Macau who has been at the Pole’s side since its creation is delighted by this agreement and wishes HKU-Pasteur Research Pole to continue to be a flagship for research cooperation between Hong Kong and France, as well as many other scientific successes. 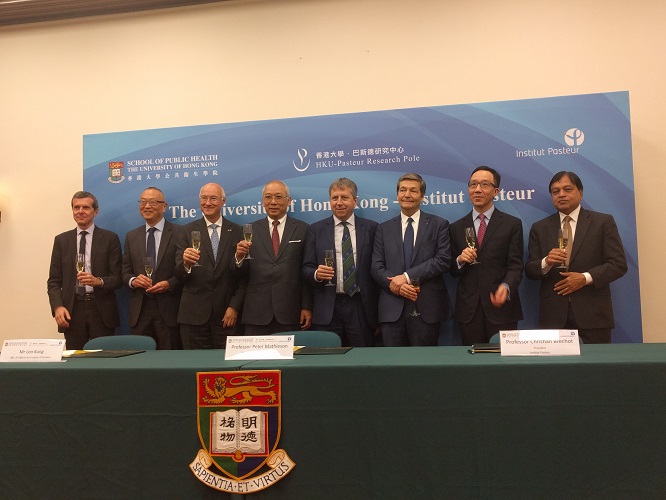