To accentuate the exchanges of ideas on Artificial Intelligence, a series of digital interactive performances and installations will be ready for participants to explore on the Night of Ideas 2018. 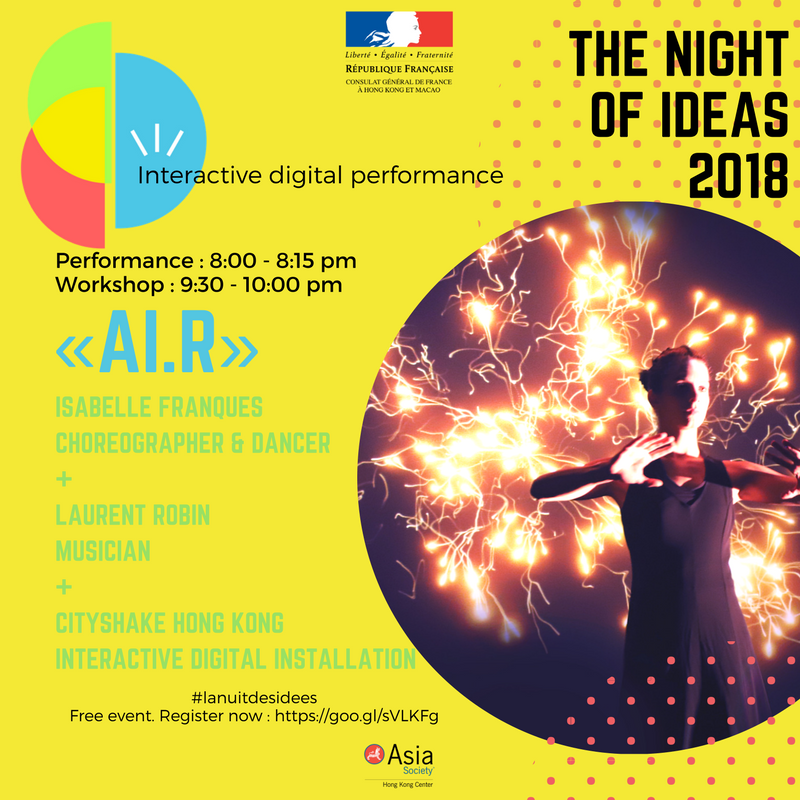 AI.R is an abstract expression of Artificial Intelligence that takes the form of an interactive live music and dance performance. CITYSHAKE takes here deliberately the angle of poetic expression to treat a subject that is usually thought of as a technical, industrial and heavily connoted subject that implies progress but also fearful threats. Taking the exact opposite of this perception, CITYSHAKE presents here a positive and artistic reality. AI.R creates a perception of aerial lightness by inviting you through a magical journey through a neuronal network of interactive particles reacting to music and dance.

CITYSHAKE pushes the boundaries of artistic expression by inventing a new format of expression where visuals interact in real-time and simultaneously with music AND movement. By unifying music, dance and visuals on one single canvas and placing human talents at the very center of the performance, AI.R questions the place of human-being in the process of digital art creation.

This performance is the result of a collaboration between digital art duo Pierre Blaise Dionet & Ilmari Heikkinen, the dancer and choreographer Isabelle Franques and the musician Laurent Robin. 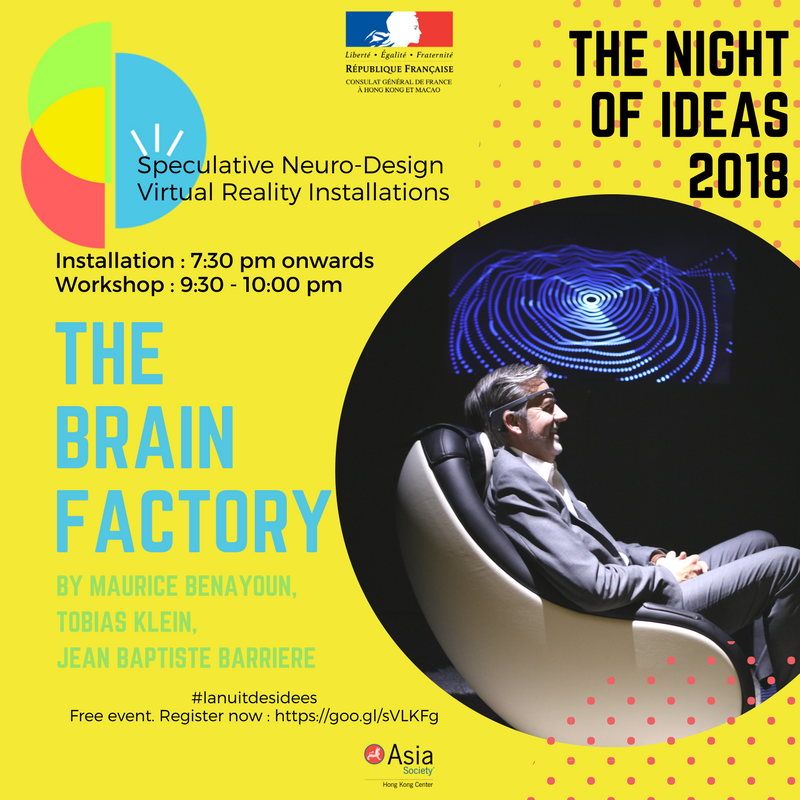 Can the matter be controlled by thought? What is, in our mind, the shape of Human abstractions?

Brain Factory is an art experiment and an interactive installation based on AI (Artificial Intelligence), EEG (Electro-Encephalography), BCI (Brain-Computer Interaction) and 3D Printing. The public, converted into brain-workers, is invited, by thinking, to turn human abstractions into objects, sculptures and commodities.

Artist, theorist and curator, Maurice Benayoun (MoBen, 莫奔) is a pioneering figure in the field of New Media Art. Prof. Benayoun’s work freely explores the boundaries of media, encompassing video and virtual reality, interactive, mobile, urban media and large-scale public art installation. Prof. Benayoun’s work has been exhibited and awarded (Golden Nica Ars Electronica 1998…) in many major international museums including the Centre Pompidou in Paris, the museums of contemporary art in Lyon, Montreal, Seoul and Helsinki, Eyebeam and Museum of the Moving Image in New York, the Machida Museum, the ICC Tokyo, including the permanent exhibition inside the Arc de Triomphe, Paris, and Curator of the Open Sky Gallery on the ICC Tower media façade, HK. MoBen’s work has won more than 20 international awards, including the Villa Medicis Hors les Murs, more than four Ars Electronica awards (including the coveted Golden Nica), Siggraph, Imagina, SACD and 4 International Monitor Awards. In 2014, MoBen was nominated for the Prix Ars Electronica Visionary Pioneer of Media Art award.

MoBen is currently a Professor at the School of Creative Media, City University of Hong Kong and Chair of Graduate Studies Committee.

Tobias Klein works in the fields of Architecture, Art, Design and interactive Media Installation. His work generates a syncretism of contemporary CAD/CAM technologies with site and culturally specific design narratives, intuitive non-linear design processes, and historical cultural references. Before joining City University Hong Kong in the role as interdisciplinary Assistant Professor in the School of Creative Media and the architectural department, he was employed at the Architectural Association (2008-2014) and the Royal College of Art, (2007-2010), teaching students at the postgraduate level.

The resulting works of his studio are exhibited international with examples being in the collection of the Antwerp Fashion Museum, the London Science Museum, the V&A, the Bellevue Arts Museum, Museum of Moscow and Vancouver. He is lecturing and published internationally with most recent articles focusing on the translation from craftsmanship to digital manufacturing.

Click here to know more about The Brain Factory 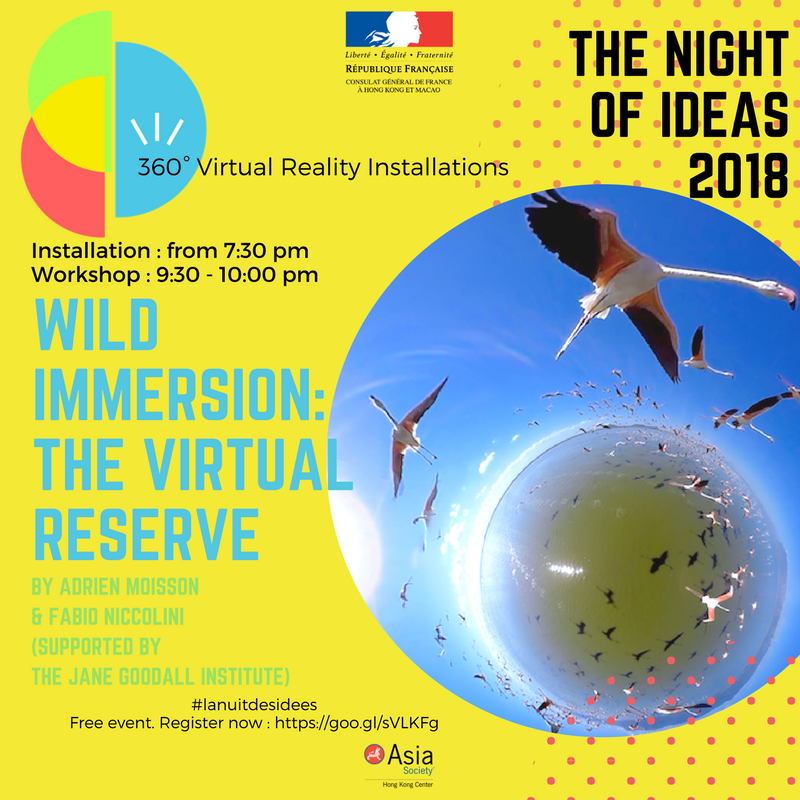 Wild Immersion is a Virtual Reserve which goal is to create events in major cities around the world as well as online. It aims to encourage people to « take action » for their planet, environment and all the living forms.

It represents a 360 VR experience which immerses oneself in the Wild Habitat. The participant is indeed “teleported” in the middle of a various range of different animals which will also interact and express themselves very closely.

Wild Immersion is produced by Adrien Moisson and Fabio Niccolini and supported by the Jane Goodall Institute, from the famous Doctor who dedicated her life to preserve environment and Wild Life.

Adrien Moisson, after being a veterinary, he has made ESCP (business school) and launched a music label (signed on EMI). Developing this activity, he created an artist collectiv with all kind of disciplines (film, art, event, music, new technologies…). His company growing fast, he developed the advertising side and produced for agency as Publicis, McCann, Havas, Y&R … Working with many artists and for Renault, Coca Cola, Mc Donald’s, Nike, Cartier, Dior and many others, he decided to change is life and stoped everything (giving the company to his brother) to produce meaningful content (films or books). He is now launching a VR experience with Jane Goodall: a journey through the whole world: into the wild with animals: WILD IMMERSION

The "Night of Ideas" represents a worldwide debate of ideas operation initiated in 2016 by Institut Français, cultural agency of the French Minister of Europe and Foreign Affairs. This special evening constitutes a unique opportunity both in France and abroad to experiment and rediscover what makes the contemporary debate of ideas. In 2017, the “Night of the Ideas” operation took place in 51 countries on 5 different continents with more than 100 events gathering 180 000 people.