Royal de Luxe was in Liverpool on 20, 21 and 22 April with a new show, Sea Odyssey, to commemorate the 100th anniversary of the sinking of the Titanic. Another monumental creation and another landmark in the highly international career of the famous street-theatre company, which draws fascinated crowds the world over, and whose infinite creativity is nurtured by its travels. 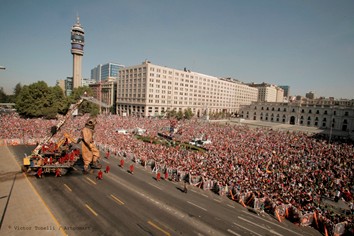 The diver and the crowd in Chile © Victor Tonelli / Artcomart

The Titanic went down on 15 April 1912. At the invitation of the city of Liverpool, Royal de Luxe has come to the liner’s port of registry with its giant figures, The Diver and The Little Girl-Giant, for an original event. The Diver has brought the city’s population letters from the 85 Liverpool residents who were on board the vessel swallowed by the sea. The texts for Sea Odyssey were developed on location during writing workshops. For three days, the Nantes-based theatre company took possession of the English city, the River Mersey, the docks and Stanley Park: “Our shows become part of a town’s legend and history,” explains Gwenaëlle Raux, the company’s associate producer. “They call upon people’s collective memory, which always brings up a lot of emotion, and they leave their mark on it in turn”.

Royal de Luxe was set up by Jean-Luc Courcoult in 1979. A forerunner of street theatre, it is unique in its zest for the marvellous, its transfiguration of objects, and above all its Giants. Let’s not talk of puppets: they may be operated by pulleys and wires but “the Giants are alive!,” Gwenaëlle Raux protests. “You can hear them breathing. And with each event, for three days they live in tune with the town where they tell a story that is specific to the place. The company’s geometry varies: from around 10 members it can expand to 85 or 120 for the Giants’ stories.” The performances also take the form of parades or square performances and even shop-window performances, such as The Revolt of the Mannequins in November 2008, for which the Berliner Festspiele made available 11 windows of the KaDeWe department store.

Since its beginnings, the company has won over audiences both abroad and in France. Even its earliest shows were performed in Italy and Germany. In 1987, the Roman Photo: shoot burlesque was performed 240 times in 22 countries in Europe and Latin America, in Africa, in the USSR, and then taken up again in 1991 for a tour in Japan, Korea, the Philippines, Australia and New Zealand. In 1992, Royal de Luxe was behind the Cargo 92 tour as part of the commemorations of the fifth centenary of the discovery of America, an event supported by the city of Nantes, the French Ministry of Foreign and European Affairs and the French Ministry of Culture. It brought in its wake other French companies and told The True History of France in several ports in Latin America.

The following year, The Giant Who Fell from the Sky besieged Le Havre, then Calais, Nîmes, Nantes and Bayonne. This wandering figure popped up again in Barcelona. Then Peplum, whose action takes place in Ancient Egypt, toured in France, Europe and Australia. The Rhinoceros was performed in Nantes and at the Universal Exhibition in Lisbon. With Sale! Two Shows for the Price of One, the company performed Shakespeare’s Hamlet and Molière’s Le Malade Imaginaire on a revolving stage in 2003 at the Aurillac Festival, in Auvergne, and then in Spanish at the Festival Internacional de Teatro at Mil in Chile where a tour took it as far as the Atacama Desert. This was followed by Madrid and Pamplona.

The shows (which are always free – this is one of their founding principles) staged by Royal de Luxe certainly bring in the crowds. In 2005, The Visit of the Sultan of the Indies on his Time-Travelling Elephant went down a storm in London. In 2007, The Little Girl-Giant and the Rhinoceros drew a crowd of more than two million Chileans! The company met with similar success in May 2008 at Santa Maria da Feira in Portugal with The Fabulous Story of the Warrior Buried Alive, which tied in with the history of the town’s medieval castle. As for Xolo, a god-dog created for the performance of The Giant of Guadalajara in Mexico in 2010 at the invitation of President Felipe Calderon, this was seen by 3.5 million people over six days!

Supported by the French Ministry of Foreign and European Affairs, via CulturesFrance and the Institut Français, Royal de Luxe acts as a courier between the cultures from which it takes its inspiration. In 1987, the company was sent on an artistic mission to Morocco and spent time in the south of the country to do their research, in their quest for new inspiration. Ten years later, they stayed for six months in the north of Cameroon, presenting Around Cameroon by Bike in village squares. They came back with a 6-metre-tall black child: The Giant and his African son process to the rhythm of four big musical machines operated by 55 musicians from Burkina Faso. The Cameroon adventure also inspired Little Black Tales, which opened in Avignon in 1999 and then went on tour in France, Valparaiso, Santiago de Chile, Buenos Aires and Europe.

In 2001, the team members lived in China, in the company of the Little Black Tales, and hosted six Chinese artists. They brought back a new show, Little Chinese Tales Revised and Corrected by Negroes, performed in Nantes and Paris. They were then invited to the festival of Hue in Vietnam, to perform the new tales, before leaving for Seoul in South Korea. They have yet to visit the United States, but this might happen: after Sea Odyssey, Fall Street will revisit the legends of the conquest of the West…