The first retrospective on renowned French filmmaker Jean Rouch, widely considered as the father of the French New Wave as well as of Ethnographic Film and “Cinéma Vérité”, will be held in Hong Kong from 21 April to 6 May.

Seven of Jean Rouch’s films will be shown, from 21 April to 6 May 2018 in celebration of the centennial of the filmmaker’s birth (1917-2004). After the screenings, the project will invite special guests including Jean Rouch’s wife, Jacqueline Rouch, and Nurul Qoiriah, head of International Organisation for Migrations, HK office, who will say a few words regarding Rouch’s contributions to the world of ethnographic cinema.

This retrospective includes the most famous works from the filmmaker, and the most characteristic of ethnographic cinema. 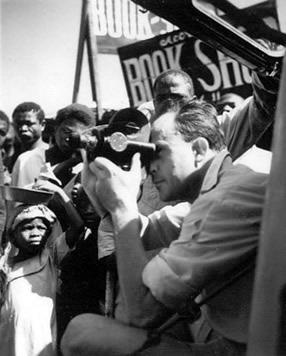 With a repertoire of over a hundred films, Jean Rouch (1917-2004) is considered as the main pioneer of visual anthropology¬ and the father of ethnofiction, combining the art of filmmaking with the science of anthropology. Rouch’s unique method documents people’s life and brings their narratives to an otherwise unreachable audience. Leaving behind his career as an engineer, Rouch began to make films to record the lives and culture of migrants in West Africa in the late 1940s and 1950s. He initiated waves in the fields of cinema and social anthropology by allowing his subjects to take part in the writing and production of his films, giving them a platform to voice their stories in their own form. Rather than seeing natives through the eyes of the West, his films gave people a way to represent themselves in an era of colonialism.

Set in Abidjan, Ivory Coast, the film follows the lives of immigrants over the course of one week as they search for jobs and fantasise about better lives.

Wishing to build a grand building in his little village, a young man from Niger visits Paris to see how it is done and is exposed to the Parisian lifestyle. Date: 25 April 2018 (Wednesday) Time: 18:30 Venue: Consulate General of France in Hong Kong and Macau, Admiralty Center Tower 2, 18 Harcourt Road, Admiralty

Organised by Thy Lab