Angers European First Film Festival will be in Macao and Hong Kong for the 3rd consecutive edition from 18 to 24 March 2019. Meet the directors and discover the best of French indie cinema!

Angers European First Film Festival celebrated its 31st edition in 2019. It showcases every year the best French and European talents beyond borders. The festival has also established long-term partnerships with China and Algeria.

Institut Français is the international partner of the festival and supports the presentation worldwide of a selection of 19 titles licensed for over the last 5 years (14 fiction films including 3 new ones in 2018, 1 documentary and 4 short films). This fine selection is representative of the first features supported by Angers European First Film Festival whether through the official festival’s selection or through various workshops. All these films celebrate independent cinema which is expressed through liberties in its storytelling, format, script between fiction and documentary, sometimes even reaching toward science-fiction and fantasy.

In 2019, 3 selected directors will be touring across Southeast Asia to meet the local audiences of Cambodia, Vietnam, Sri Lanka, Macao and Hong Kong. Hubert Charuel will present multi-awarded thriller Blood Milk (2018). Codirectors Emmanuel Morice and Nicolas Thomä will present indie self-funded documentary The Kitchen with the Righteous (2018). This Asian tour is coordinated by the French cultural network with its local partners.

Programme in Macao and Hong Kong

The local tour is coordinated by the Consulate General of France in Hong Kong and Macao.

The tour is organized in Macao in partnership with Alliance Française Macao, Macao Museum of Art and the Academy of Cinematic Arts of Macau University of Science and Technology.

In addition, the university organizes a seminar at 11.45am dealing with “How to direct your first feature?” in the presence of the three directors. The seminar is open to all university students.

The directors will also conduct a series of combined training workshops on 19th March all day with Academy of Cinematic Arts. Master degree students in both film production and film management will be provided with first-hand experience on “How to direct a documentary sequence in a kitchen?” and on “How to shoot a Lumière Minute” sequence?”.

The last step of the Asian tour will be organized in Hong Kong in partnership with Alliance Française Hong Kong, the Baptist University of Hong Kong, Business France Hong Kong, La Cabane Wine Bistro and Cellar and MOVIN’ GRID.

In the frame of the Francophonie Festival, Hubert Charuel will meet on 22nd March the “French stream”’ students of the European studies Department of the Hong Kong Baptist University.

Another screening of the film will take place on 22nd March at 8pm at the cultural centre Hong Kong Fringe. It will be followed by a Q&A at 9.30pm with the director organized by Alliance Française Hong Kong. Free registration: https://afhongkong.org/events/petit-paysan-screening-director-hubert-charuel

Finally, a special event around “The kitchen with the Righteous”’ will be organized jointly by the Consulate and La Cabane on 23rd March from 6pm to 8pm in the evening at sponsoring space MOVIN’ GRID. The screening of the documentary will be followed by a tasting of organic and natural Loire Valley products in the presence of the directors. Free registration :https://www.eventbrite.hk/e/french-film-la-cuisine-des-justes-x-loire-valley-gourmay-tickets-58616670038 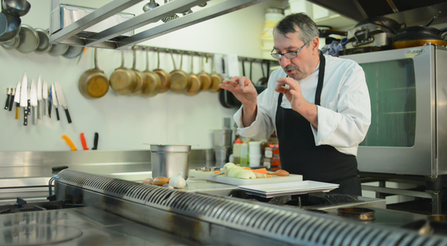