The 45th edition of the “Cinema Cesar” ceremony [fr]

The distinguished festival of French cinema, "Les César du cinema", will celebrate the 45th edition this year on Friday, 28 February in Paris. The Cesar Awards for Cinema reward each year the films released between 1 January and 31 December of the previous year and the artists and technicians who participated in these films.

This year, the hostess of ceremonies is the humorist and actress Florence Foresti who had already accepted this role four years ago.

For this 2020 edition, a new category is appearing among the 21 already existing: le César du public, which will reward one of the five French films leading the 2019 box office.

The César poster pays tribute to the internationally renowned French actress Anna Karina, who passed away in 2019. 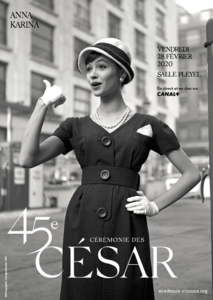 For this 45th edition, certain films were named in many categories, this is the case for example of the film "Les Misérables" by Ladj Li which was also in competition at the Oscars as well as the latest film by Céline Sciamma "Portrait of the young girl on fire ”who won 10 nominations.

Let us gather on Friday February 28 to find out who will be the big winners!