The 41st edition of the French Cinepanorama – Discover the 2012 selection and book your tickets now!

With the launch of the website www.frenchcinepanorama.com on the 1st November, Alliance française de Hong Kong has revealed the programme of the French Film Festival 2012. 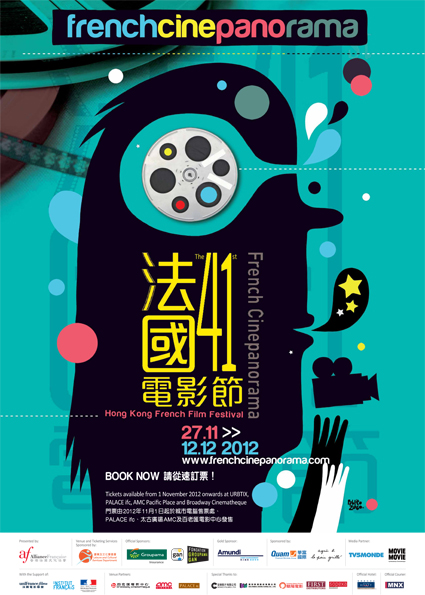 Organized by the Alliance française de Hong Kong with the support of the Leisure and Cultural Services Department, the 41st French Cinepanorama will run from 27th November to 12th December, 2012.

After an exceptional year for the French cinema, the French Cinepanorama is a must-attend festival.

French cinema is continuing its enviable trend of gaining awards at international film festivals, including the ones in Cannes, Venice and Berlin, and has been a huge box office success this year. The Artist won five 2012 Academy Awards; while The Intouchables has accumulated more than 43 million audiences around the world. Buoyed by the success of high quality French films, cinema attendance hit a 45-year high of 215.6 million patrons in 2011.

This “Grand cru” of the French Cinema will show in this year’s selection of the French Film festival. With 54 films and 115 screenings, the Festival will offer the audiences a wide palette of innovative and exciting films that suit all tastes.

With the launch of the website www.frenchcinepanorama.com on the 1st November, Alliance française de Hong Kong has revealed the programme of the French Film Festival 2012.

Discover the great selection of this year and all films’ trailers.

Follow the latest news of the Festival on www.facebook.com/frenchcinepanorama and http://twitter.com/fcp_hk