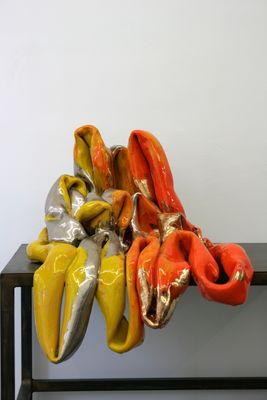 From 5 October to 18 November at Galerie NeC

Sculpture, polyglot, curious and on the alert, fascinated by the countries which she has discovered, cultures and languages which she practises and likes, Clémence Van Lunen is a renaissance woman . She develops multiple works which could be defined as « high curiosity « in the same sense we sometimes describe ancient amateurs cabinet, but in her case it is in an eclectic and knowledgable way. The art critic and exhibition curator Frédéric Bodet wrote about her work, “rare forms are expressed with an indecisive act, dedicated to the enjoyment as much as to the dismay that she constantly tries to disturb us, her sculptures evoke a sort of sympathy which makes you stop and hesitate”.

Her invitation to Sèvres in 2007 - that allowed me to get to know her better - stood out as an evidence, as a necessary stage for her after her travels a round the world and her research in ceramics.

On her return from one of her regular travels to China, she proposed at Cité de la céramique a universe of porcelain dragons (she chose on purpose the most symbolic animal of China), with the determination to produce them all herself with an never before used experimental mixture of porcelain pastas from our mill.

Compositions of a series of porcelain elements turned, deformed then wrapped up, gathered in an experimental way and delicately assembled, the monumental sculptures required the traditional techniques of production but, however, adapted in a personal and creative way. She then imagined an centre piece , consisting of several elements of biscuit which was built up of a small «archipelago» on a table, like so many islands with strange plants; it was an invitation to a new journey!

Her experience at la Cité de la céramique illustrates perfectly its capacity to create a gateway, to imagine formal round trips, cultural and aesthetic juxtapositions, which are her trademark and her talent.

Monday to Saturday 11am to 8pmSunday 1pm to 6pm