Prof. Claude Cohen-Tannoudji, Nobel Laureate in Physics in 1997 for the development of methods to cool and trap atoms with laser light, gave a lecture on 13th January 2012, at the City University of Hong Kong as part of “The France-Hong Kong Distinguished Lecture”.

An audience of a hundred people including the President of the City University of Hong Kong and Prof. Bensoussan, former President of INRIA and CNES, attended his presentation on "Advanced in atomic physics from quantum to optical pumping gases". 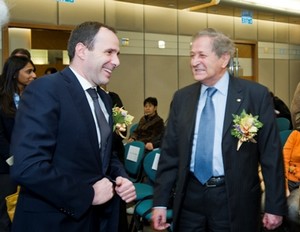