Performances of Le French May 2015

Celebrating the 500th anniversary of the French Renaissance which established a specific French style in architecture and art from May 1 to June 30, Le French May 2015 will highlight the permanent spirit of Innovation and the strike for Excellence at the essence of French creation. Under the title “Essentially French” , the new edition of Le French May will explore this spirit leading French painters, choreographers, sculptors, dancers, singers, film makers, to always challenge themselves. It will explore this balance between heritage and modernity, between classicism and innovation, between the past and the present. 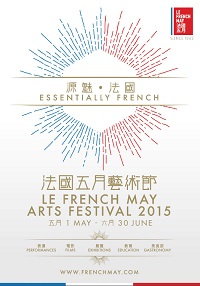 From Renaissance music to hip hop, baroque opera to contemporary dance, classical drama to the young generation of the pop singers, the performances of the 2015 edition of Le French May will rock! It will bring the audience into a completely new universe between the past and the present.

La Double Coquette is an ambitious project that combines baroque with Contemporary, weaving together music of Antoine Dauvergne’s first score for the opéra comique (1753) with “additions” by composer Gérard Pesson (2015), into an updated libretto by French poet Pierre Alferi. In a plot reminiscent of a farce where two women compete for the same fickle lover, eleven musicians from the ensemble conducted by Héloïse Gaillard and Violaine Cochard mingle with three acting singers wearing costumes designed by the internationally acclaimed visual artist Annette Messager.

In celebration of the 500th anniversary of the coronation of King Francis I, six musicians, two singers and four dancers revive the atmosphere of the great festivities once held in the Kings court during the 16th century. With music, singing, dancing and sumptuous costumes, Doulce Mémoire transports you back to the King’s court to enjoy celebrations that are filled with surprises.

A masterpiece by one of the greatest playwrights in French and Western literature, Molière, The Bourgeois Gentleman is a satire filled with humour. By choosing to reproduce the play in its original form of a comédie ballet accompanied by music from Lully, Director Denis Podalydès (from the Comédie Française) assembles all the art forms: theatre, music and dance. With this theatrical party piece costumed by Christian Lacroix, he targets the triumph of the senses so very much hoped for by the story’s hero.

Humorous and poetic, Blblblb use music and body gestures as language to communicate with audiences. "Blblblb" has been played for nearly 130 times in France.

Who is this character came out of nowhere, which bombards us with bizarre waffle into "blblblb"? His language is as close to the child’s babbling, jazz scat; but it gradually manages to make itself understood through the discovery of musical instruments all around the world, which is at the same time rich and amusing ... So this funny "Little Prince" half clown, half-elf, embeds the public in a journey punctuated by cascades of laughter and poetry: this joyous musical world tour proves emotion that go beyond words because when we talk in “Music”, borders miraculously vanish to make way for the meanings and understandings.

The Roots is a human adventure and a journey enacted by eleven exceptional hip-hop dancers who each contribute their individual virtuosity to the group. Energised by his personal history of urban sidewalks, big tops, boxing rings and theatres, Artistic Director and Choreographer, Kader Attou, describes The Roots as a work that is deep-rooted in hip-hop culture. But although it refers to the origins of the movement, The Roots is no exercise in archaeology or a return to the past. It is a creation of light and air that represents yet another step forward in redefining the boundaries of hip-hop.

Tel Quel! is a contemporary dance for young and not-so-young audience. In wondering about how current choreographic art is perceived by youth, and with a strong will to develop his art form towards new and larger audiences, Thomas Lebrun imagines a piece conceived to speak to the young (children) and also the not-so-young (teenagers and adults) about diversity, tolerance, indulgence and humanity. By questioning the never-ending relationship with the body (intimate, conflicting, generous, exposed, and overexposed), the choreographer – assisted by his 4 dancers – carries on a reflection on accepting particularities and singularities as expressive forces. 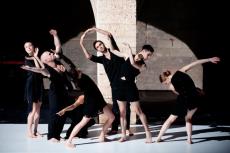 Lied and ballet are two very important artistic forms from the romantic period of the first half of the 18th century. In his latest production, created in July 2014 at the Avignon Festival, he brings them face to face, using the lieder texts as a score and the main source for the choreographic composition. Divided into three acts – the traditional structure in ballet – Lied Ballet proposes a journey from abstraction (1st act) to modernity (3rd act), without eluding references to classical ballet in a second act where eight dancers are joined by a tenor and a pianist for a live performance of famous lieder by Berg, Mahler or Schoenberg.

The French Miracle Tour brings some of the most up-and-coming French bands to Hong Kong and Asia, and features the rich diversity in contemporary French pop, rock and electro.

A throwback to the flower power era, the 60’s sounds of Brigitte whose music combines lounge-pop, retro folk and French cabaret are just mesmerizing. Their videos are everywhere on TV, internet and they made the cover page of fashion magazine. Their first time concert in Hong Kong is not to be missed under any circumstances!

Ballades Enfantines / Childhood Ballads For Young Children And Their Parents

With Les Ballades Enfantines (Childhood Ballads), singers Domitille and Amaury de Crayencour take children and their parents on a trip to Paris and along the River Seine to discover the unusual and bubbly side of the French capital city through the musings of a mischievous local girl.

Accompanied by Marc Pinon (guitar, keyboard and percussion), who creates a jazzy-swing universe, and Hélène Druvert, illustrator of the set based on a childhood world full of funny little details, the little troupe transports the audience through the city’s main neighbourhoods, monuments and parks. On the way, they bump into a ballerina at the opera, fly through the sky on a travelling kite, sail on a beautiful white boat, sing in the rain and cruise along the carefree river! 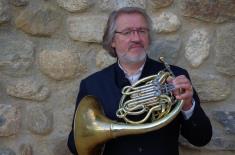 Programme included Serenade for winds, KV388 by Mozart, Elegie for horn and piano by Poulenc, Horn Quartet no. 1 by Barboteu, Divertissement for Winds and piano by Roussel and Chrysalis: In Memoriam Olivier Messiaen (World Premiere) by Christopher Coleman.

27-year-old pianist Lise de la Salle has emerged as one of France’s musical revelations, captivating audiences of the world over with her prodigious gifts, superlative technique, and a passionate, mature musicianship found in only the rarest of prodigies. To mark her Hong Kong debut Lise de la Salle performs Mozart’s Concerto for Piano No.23, a work full of pathos and playfulness, and Saint-Saëns’ Concerto for Piano No.2, a show-stopping nod to Parisian cabaret music. Fauré’s charming orchestral suite Masques et Bergamasques led by Jean Thorel completes the French connection. 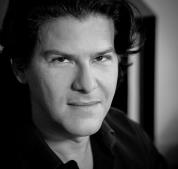 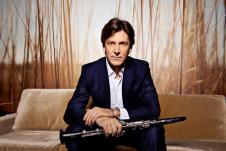 French clarinet master Paul Meyer has charmed the world with his delicacy and flawless virtuosity.

Under the baton of Yip Wing-sie, Meyer will collaborate with Hong Kong Sinfonietta in two of the most significant pieces in the clarinet repertoires. Written by the great French Impressionist composer Debussy, Première Rhapsodie brings out the mellow and lyrical tone of the clarinet; whereas the rarely-heard Clarinet Concerto, the last orchestral work composed by Nielsen, is also one of the most challenging and most-loved pieces for clarinettists.

Chow Ching Ling graduated from the Shanghai Conservatory of music and is an internationally-renowned pianist. Participating in many juries at international music contests, she uses her influence to defend arts education.

Olivier Charlier is one of the most talented violinists of his generation. Entering the Paris Conservatory at the age of 10, he won a series of prizes at international competitions. 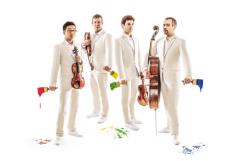 Sa Chen successfully competed in the Leeds International Piano Competition as the youngest contestant in 1996. She was named “a brilliant pianist” by Emmanuel Ax.

Quatuor Diotima is one of the most sought-after group in the world, and one of the 5 young string quartets in the world you should know as Gramophone Magazine said. 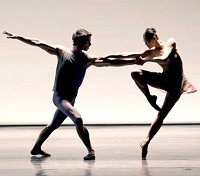 On The Way To The Front brings together artists from Asian People’s Theatre Festival Society (Hong Kong) and Théâtre de l’Ordinaire (France), presenting an innovative Mask Theatre performance, fusing live music, movement, juggling and stories between the East and West, then and now, to reveal the political, tragic and sentimental histories that made up the grand History of the Chinese Labour Corps, the 140,000 workers during the First World War.

Creating a fantastic and non-realistic universe, this highly musical and visual show is bringing you to a world of poetry and humour, exploring the hope of a world of solidarity.

Discover more performances in Le French May 2015 on the official website: http://www.frenchmay.com/Programmes/Performances.aspx