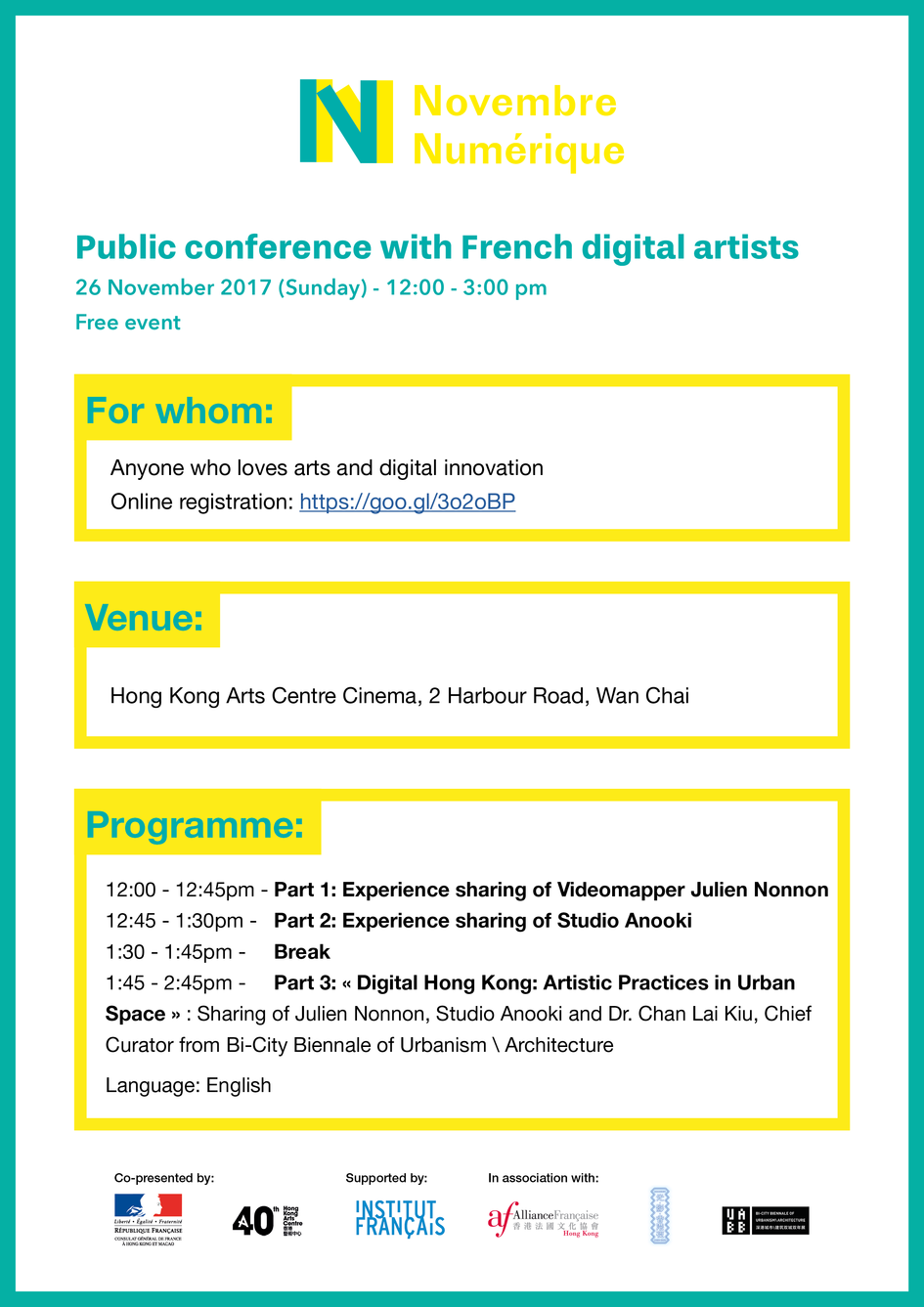 The French visual artist Julien Nonnon is well-known for his public exhibitions in Parisian streets. The founder of Le 3 Creative Studio has launched a famous project called “SAFARI URBAIN” in the French capital by integrating street art and video mapping technology. This new form of street art is continuously drawing much attention from the public and intrigued them to ponder on the interactions of digital art and public space.

In “SAFARI URBAIN”, Nonnon excels in bringing a fascinating series of photographs representing animal portraits dressed stylishly. He has manipulated the cityscape as a playground for artistic expressions and surprised his audience with creative urban features. His work has been featured worldwide (Paris, Stockholm, Orlando, Madrid etc) ; widely recognised and published among international media, such as Fubiz, Radio Nova, Arte, Télérama, The Creators Project etc.

Invited by Alliance Française Hong Kong in the scope of Lumières Hong Kong, Nonnon will star animals with Chinese zodiac signs in his artwork, projecting in Yau Ma Tei and Mongkok.

These two lovable characters of Anooki have sprung right out of the imaginations of Inook, a digital creative agency based in Lyon, founded by two French digital designers Moetu Batlle and David Passegand. Starting with simple e-cards of Anooki, they have been designing and producing a complete animated TV series of 60 episodes for the national television. Inook also seized the opportunity to produce a monumental light show featuring their favourite characters for the Festival of Lights in Lyon 2012. The great success of this unique show has, since, opened the doors for more Anooki shows in major cities around the World: Dubai, Osaka, Singapore, Kiev etc.

The Anooki are two super cute digitally crafted Inuits coming from the two poles. Their ice floe has melted, so they have to run across the world to seek a way to search for their lost ice cubes. They joyfully remind us how precious the nature is to us. The Anooki convey simple feelings that make children and adults laugh. They also have the astonishing power to make us see through our children’s eyes again. By gently tickling our mind, the Anooki secretly hope to save the planet.

For Lumières Hong Kong, they picked a new playground: the General Post Office façade. Mischievous and clumsy, they will live a unique adventure, running along cornices, jumping out the windows, turning the façade into a trampoline or an ocean, practicing calligraphy or Nunchaku like nobody else…

Dr. Chan is the founder of a multi-disciplinary design practice arQstudio Ltd and a co-founder of architectural practice AMQ Ltd and the HK room in PMQ. Her social innovation idea, aTTempspace won 2015 Techathon, which led to an IT startup in Science Park.

Before her entrepreneurial ventures, she was the Director of Design and Project in Hysan Development Co. Ltd from 2008 to August 2014, She led teams to complete the LEED and Beam Plus Platinum project, Hysan Place and a number of major asset enhancement projects in Causeway Bay LeeGardens area. Before joining Hysan, she was a design director in P&T Architects and Engineers Ltd. Her projects won many local and international awards, such as ULI Global Sustainability Award, AIA/ALA Library Award, DFA Best Design from Greater China Award, MIPIM Gold Award, HKIA Annual Awards, etc. She was also the recipient of Hong Kong Young Architect Award in 1993 and the winner of Tai O Twin Bridges Design Competition in 2013.

Apart from design works, she is an artist, curator and writer. She blogs at the platform ARSPIRE. Currently she is also a Director of the Hong Kong Architecture Centre.