Accompanied by the pianist Terry Truck, the French singer Mouron offers a concert of beautiful French chanson standards. French diva Mouron is not just any singer, she is the top of her craft. She has reached the pinnacle of the song world, an attainment shared only by other great artists such as Edith Piaf. Mouron reveals the chic moods and sentimental tones of French Chanson as she sings a selection of the best Parisian hits. 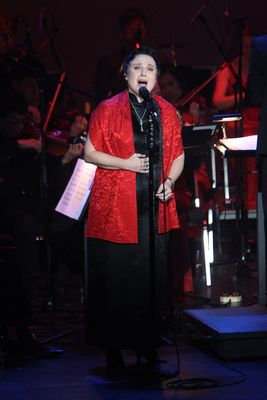 About MouronBorn in Marseilles in a family of musicians, Mouron played in L’Olympia – the most famous music hall in France, Paris – when she was barely 17. Soon she started writing her own songs. She has been influenced by the likes of Edith Piaf and Jacques Brel. Since the beginning of her career in the 1980s, Mouron released several solo albums and in the mid-nineties she played in Alfredo Arias’ famous production “Fous de Folies.” The singer first met German cabaret star and pianist Terry Truck in 1995 and has been collaborating with him ever since. They have created many shows together. She has presented her shows in many editions of the famous French festival of Avignon, France. She has also performed around the world and especially in Asia.