Home > The Consulate General > News > Consulate news > Mobilization in Hong Kong & Macau in memory of the victims of terrorist (...)

Following the attack carried out against Charlie Hebdo magazine on Wednesday 7 January in which at least 12 people were killed, François Hollande visited the scene and denounced what he described as an exceptionally barbaric act. The French community in Hong Kong and Macau rallied in memory of the victims of terrorist attacks in France.

The Consul General of France in Hong Kong and Macau, Arnaud Barthélémy, was the guest of the show Money for Nothing on RTHK 3 hosted by Reenita Malhotra Hora and Peter Lewis on Thursday, 8 January 2015. He expressed condolences to the families and friends of the victims. Find the podcast by clicking here. 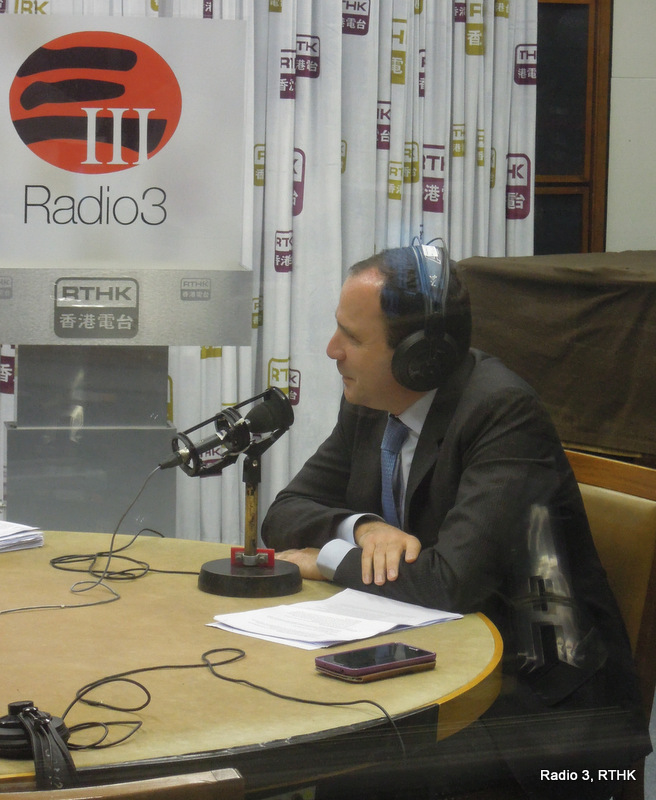 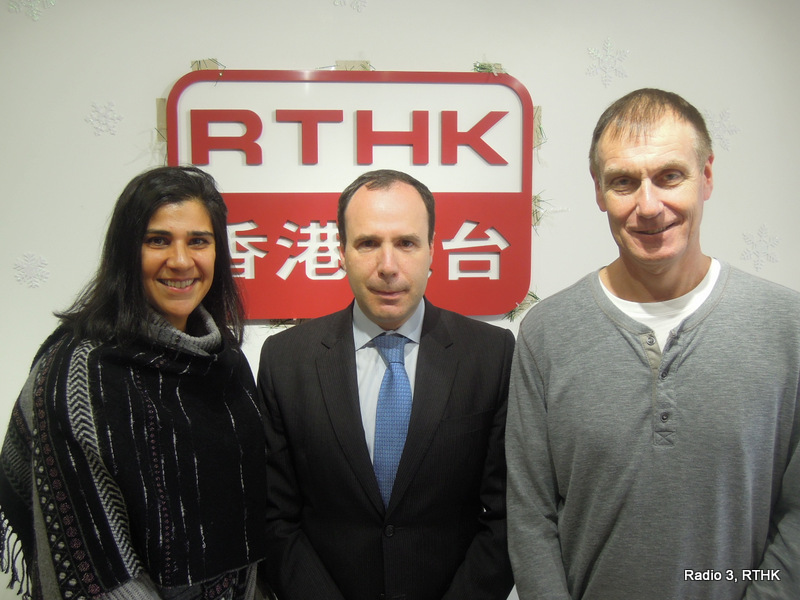 A minute of silence in memory of the victims of the attack at the headquarters of Charlie Hebdo was observed on Thursday 8 January 2015 at noon at the Consulate, the French International School, the French Chamber of Commerce in Hong Kong and the Alliances Françaises of Hong Kong and Macau. The flags of the Consulate and the Residence of France were flown at half-mast until Saturday . A condolences book was opened at the Consulate on Thursday afternoon. If you wish to express your solidarity and honor the victims, a book of condolences remains open at the Consulate, 26/F, Tower II, Admiralty Centre, 18 Harcourt Road, Hong Kong on :

A photo-shoot was organized by the Foreign Correspondents’ Club of Hong Kong, at 4:30pm on Thursday 8 January 2015. More than 50 people attended with signs "Je suis Charlie", including representatives of the Consulate General of France. 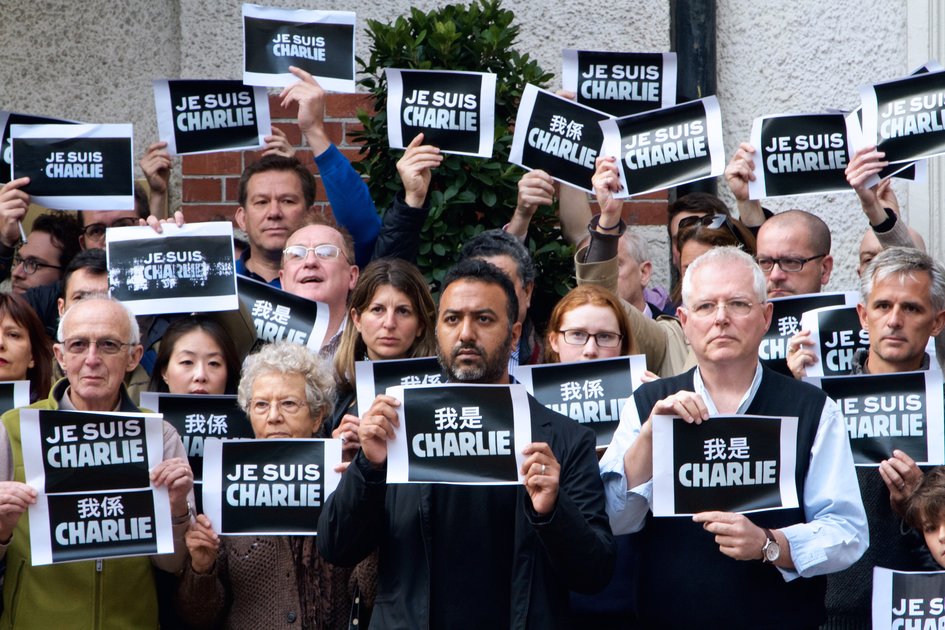 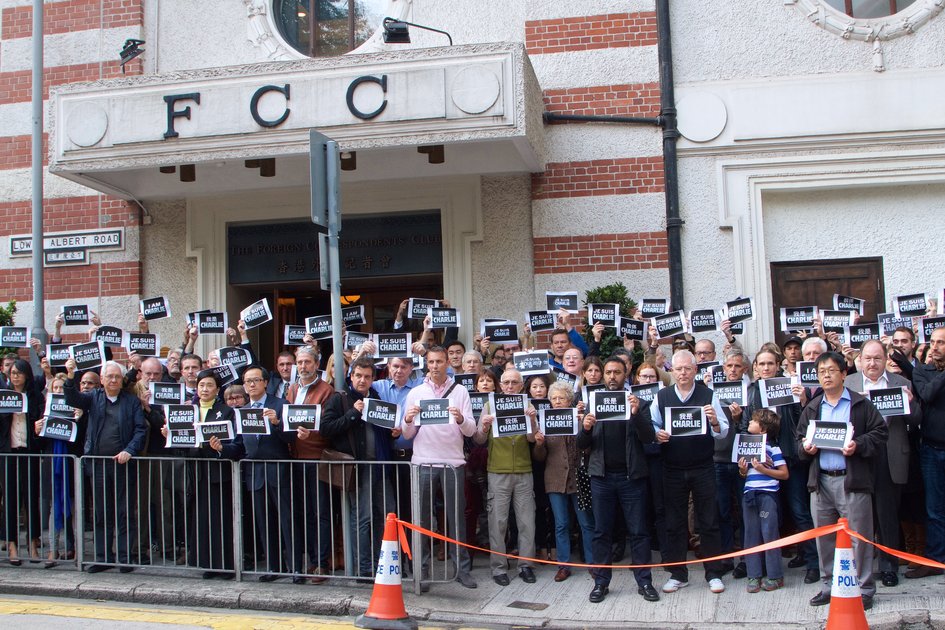 « The Foreign Correspondents’ Club, Hong Kong, is deeply shocked by the killing of 12 people at Charlie Hebdo, the Paris-based satirical weekly. We extend our sincerest condolences to the victims’ families, colleagues and friends.

The murderers and their extremist ideology are a threat to press freedom everywhere. Satire and parody are fundamental to a free press.

In solidarity, we invite members and other supporters of a free press to attend a photo-shoot outside the club today, at 430pm. We will issue signs to hold up saying "Je Suis Charlie" (I Am Charlie).

« A rally organized by the UFE-HK to honor the victims of the attack against Charlie Hebdo, was held in Hong Kong on Thursday night.

More than a thousand people gathered in front of Chez Patrick in Wanchai to pay tribute to the victims. All generations were represented at the rally to express strong emotions and to show their solidarity.

Arnaud Barthélémy, Consul General of France in Hong Kong and Macau, has read the message of the President of France and Anne Denis-Blanchardon, Consul (Culture, Education & Science), a passage from the poem Freedom of Paul Eluard. This was followed by a minute of silence and the Marseillaise echoed by the crowd. Candles were lit and the crowd remained long after this short ceremony. » 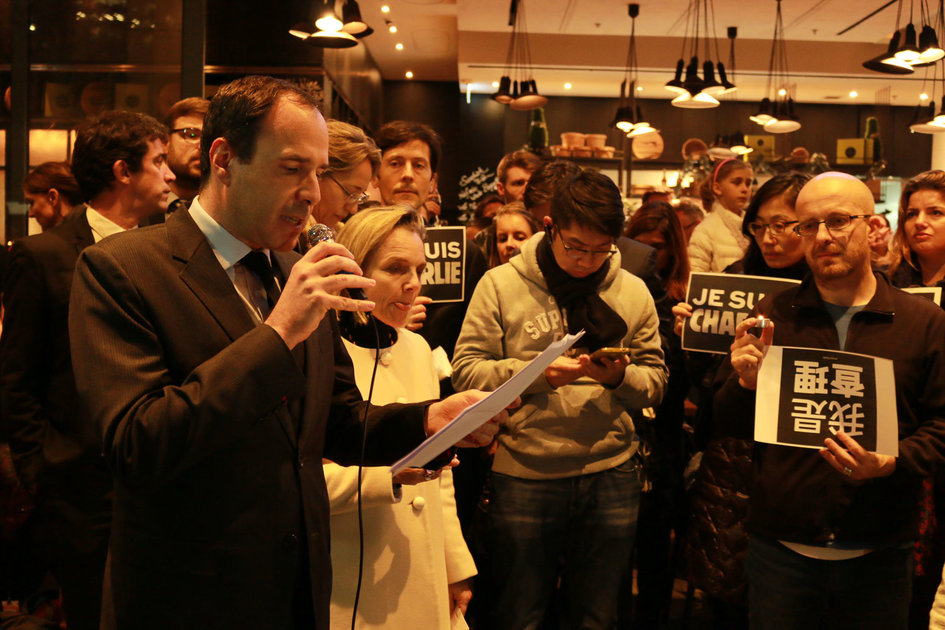 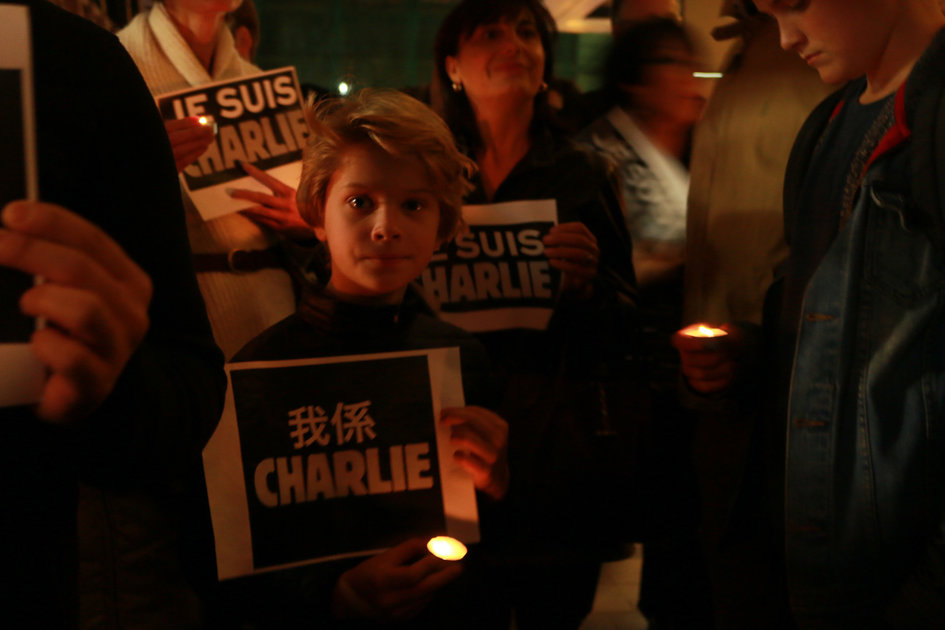 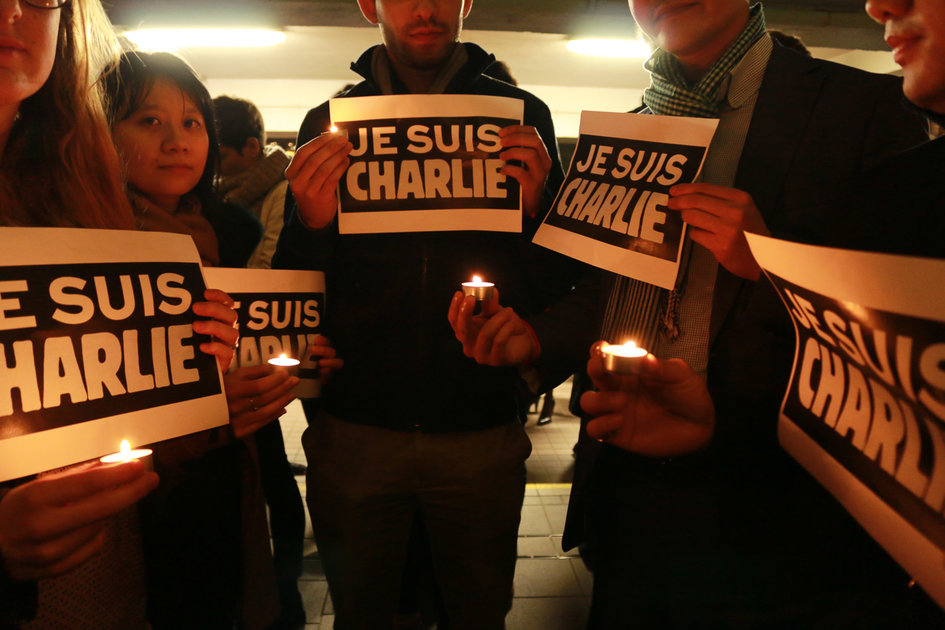 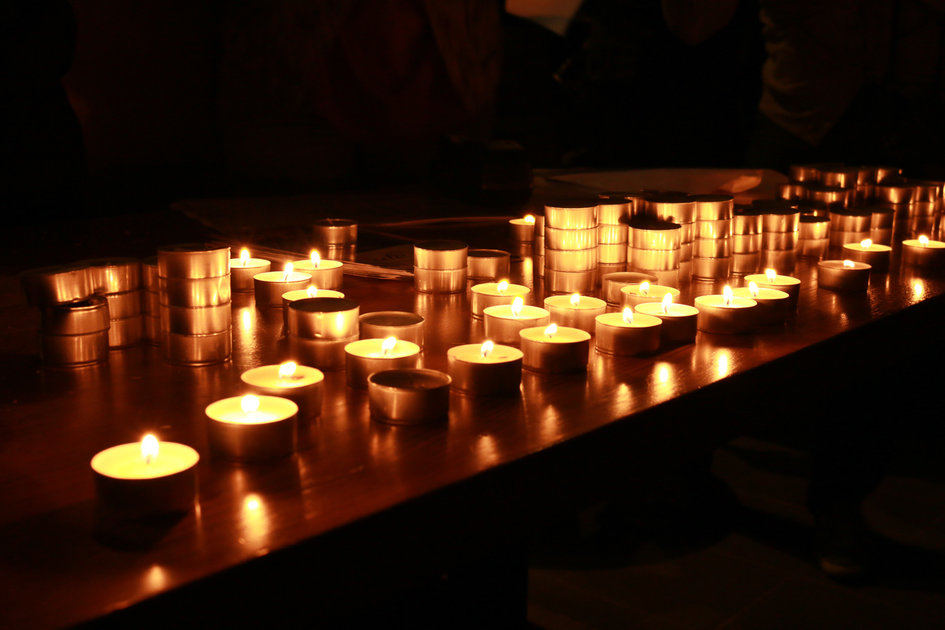 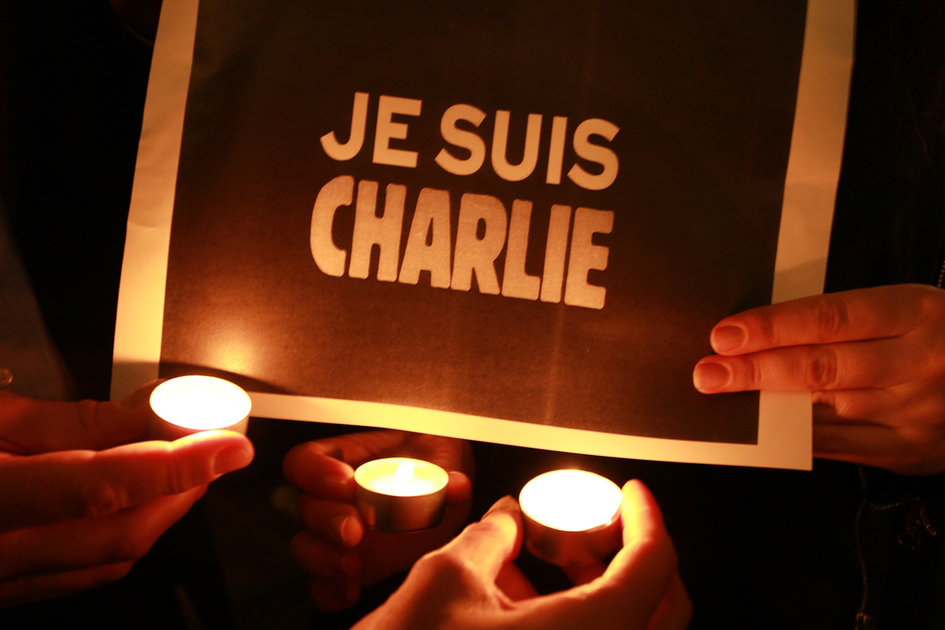 A condolences book remained opened at the Consulate on Friday 9 January 2015. If you wish to express your solidarity and honor the victims, a book of condolences remains open at the Consulate, 26/F, Tower II, Admiralty Centre, 18 Harcourt Road, Hong Kong on : 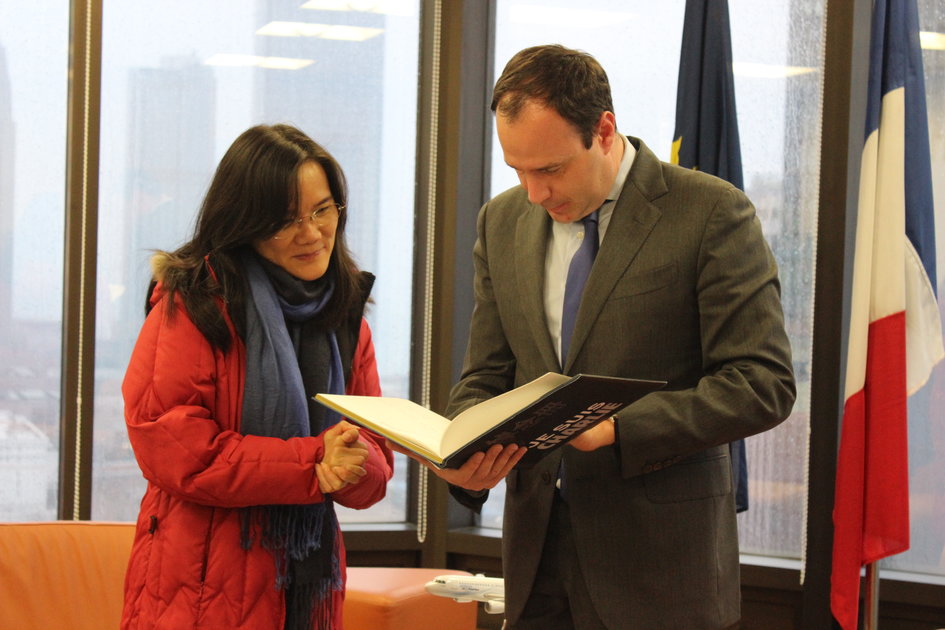 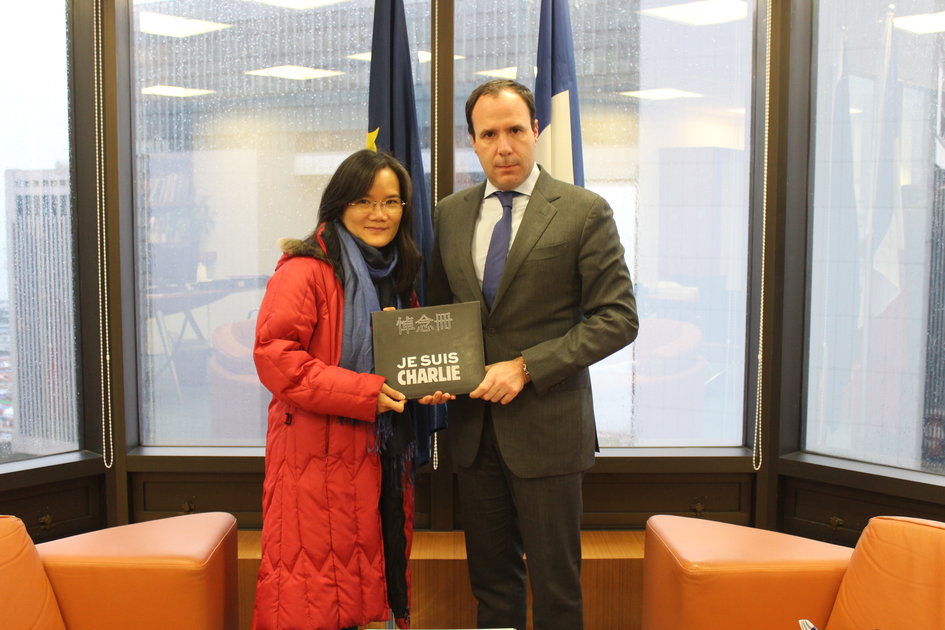 The International Federation of Journalists (IFJ) is with deep sadness to seek your support and solidarity following the brutal shooting at the offices of the French satiric magazine Charlie Hebdo in Paris.

[Friday 9 January], our colleagues from the European Federation of Journalists (EFJ) together with the IFJ will conduct a minute’s silence in memory of those lost in this tragic and senseless killing.

In solidarity, we invite all members of the media and supporters of press freedom to bring your own pen to attend. » 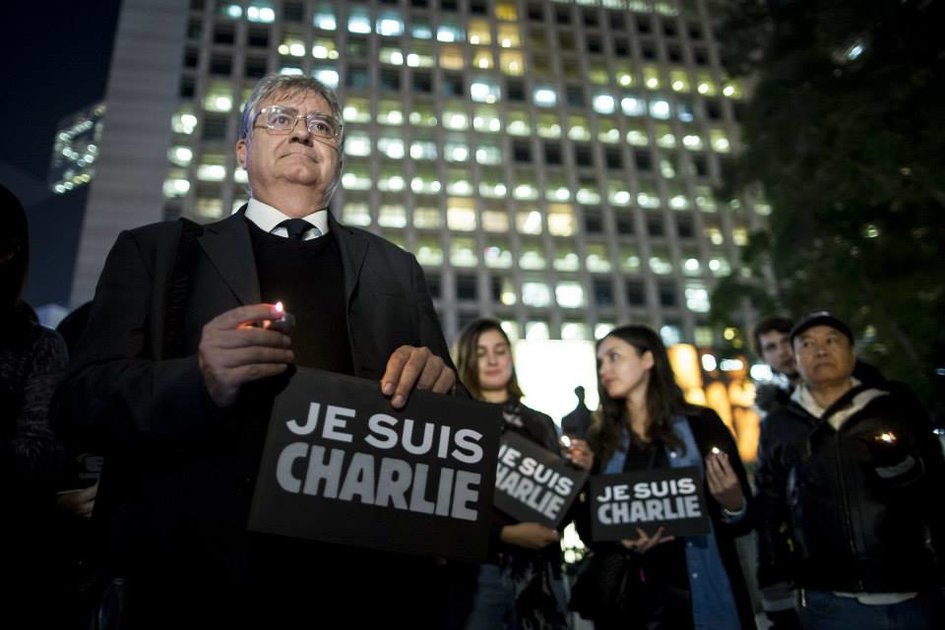 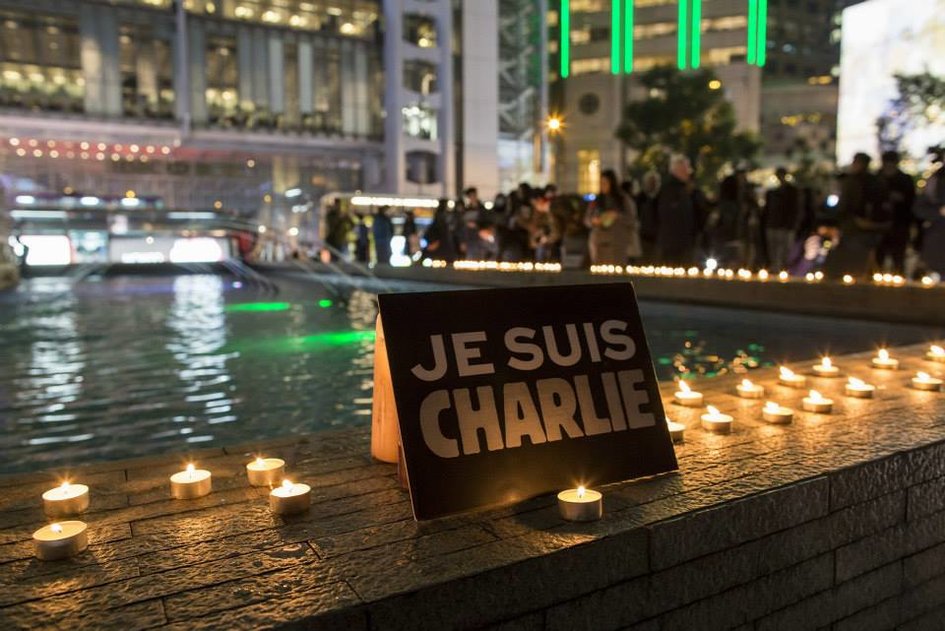 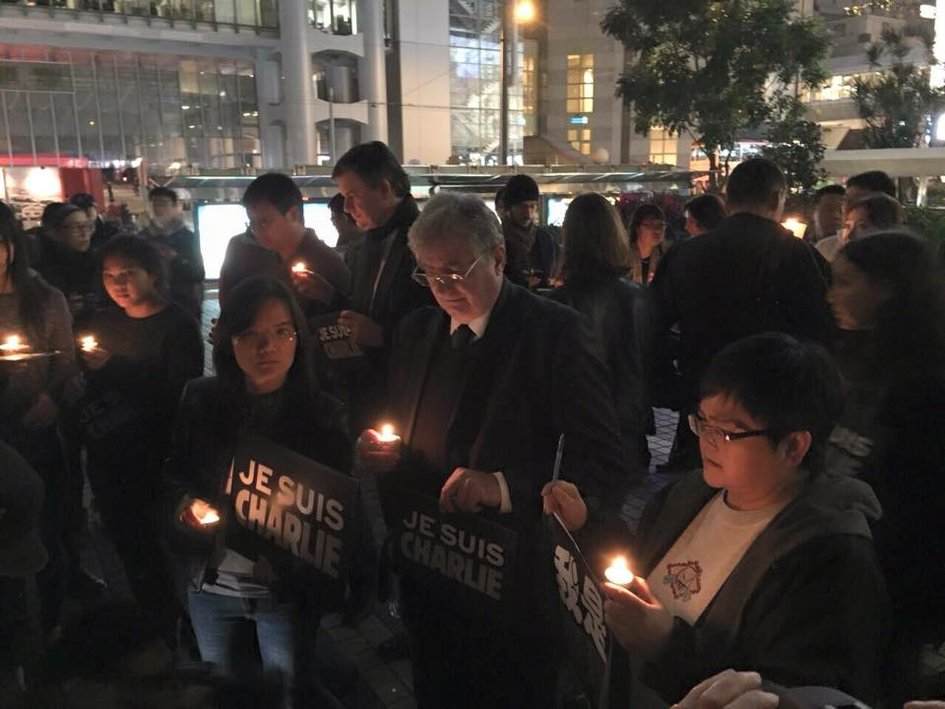 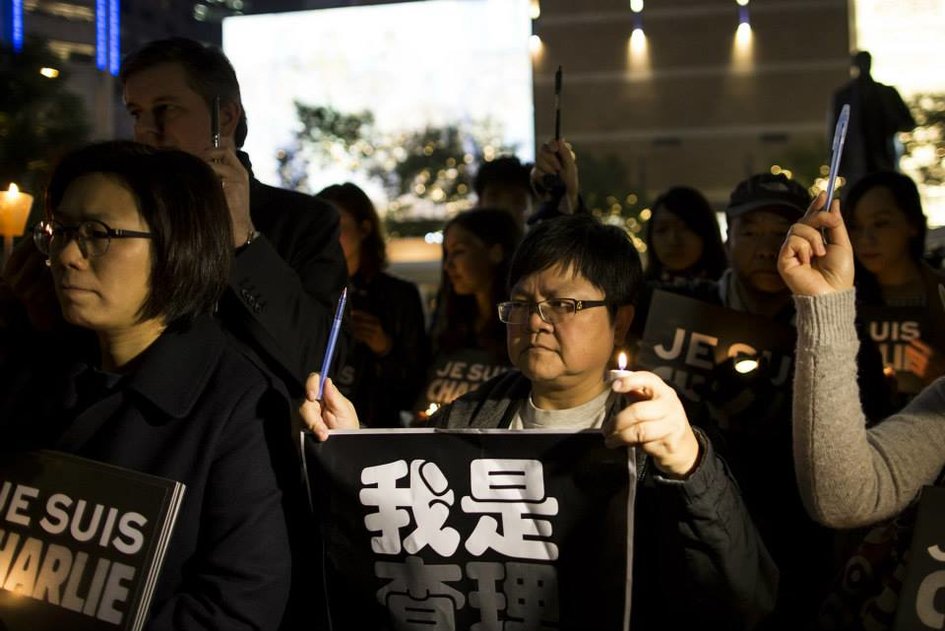 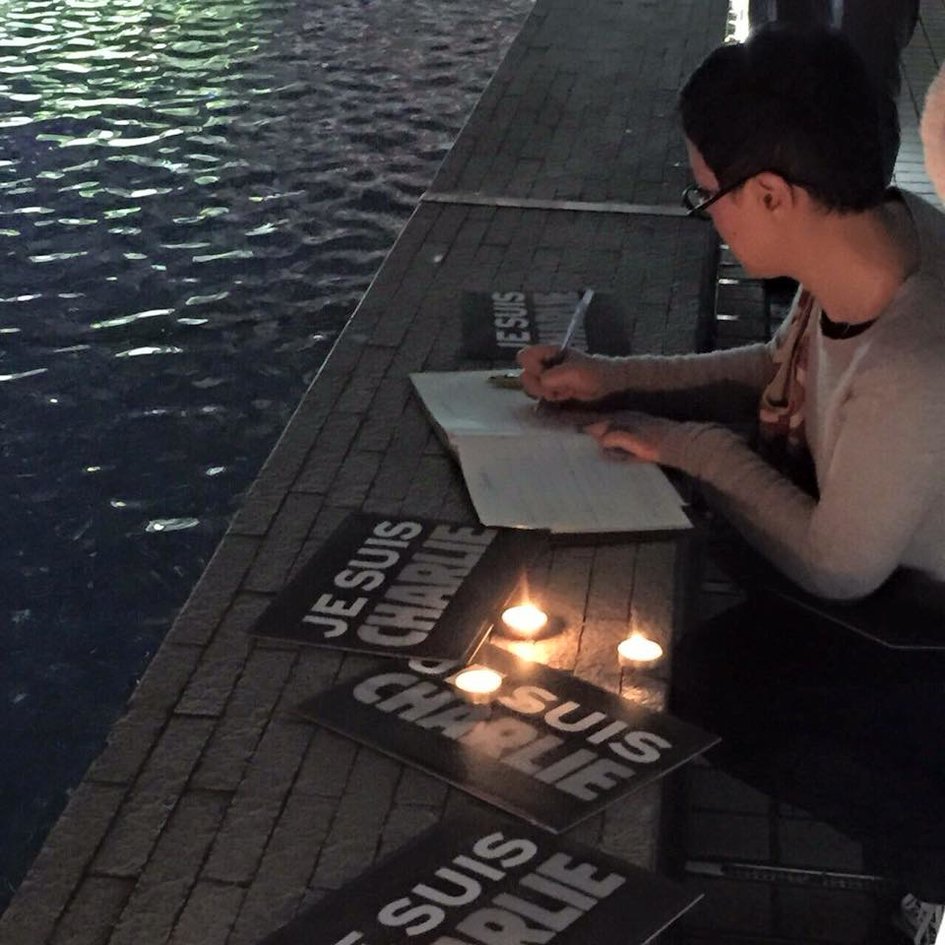 The French community in Hong Kong rallied again in memory of the victims of terrorist attacks in France on Saturday 10 January 2015 at 2pm in the Tamar Park, Admiralty. 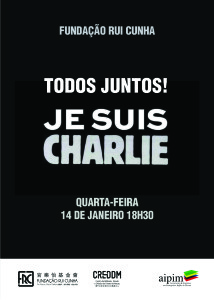 2- Statement by Mr. François Hollande, President of the Republic (January 7, 2015)

Today, France was attacked at its very heart in Paris, at the offices of a newspaper. This extremely violent shooting killed 12 people and injured several others; highly talented cartoonists, courageous columnists were killed. Their impertinence and independence influenced generations and generations of French people. I want to tell them that we will continue to defend this message, this message of freedom, in their name.

This cowardly attack also killed two police officers, the very ones who were responsible for protecting Charlie Hebdo and its editorial staff who have been threatened for years by obscurantism and who defended the freedom of expression.

These men, this woman, died because of their vision of France, namely freedom. I would like, on your behalf, to express our wholehearted gratitude to the families, to those affected, to the injured, to the friends, to all those who were deeply hurt today by this cowardly murder. They are now our heroes and that’s why I have decided that tomorrow will be a day of national mourning. There will be a moment of silence at 12:00 pm in all government offices and I encourage everyone to join in. Flags will be flown at half-mast for three days.

Today it is the Republic as a whole that has been attacked. The Republic equals freedom of expression; the Republic equals culture, creation, it equals pluralism and democracy. That is what the assassins were targeting. It equals the ideal of justice and peace that France promotes everywhere on the international stage, and the message of peace and tolerance that we defend – as do our soldiers – in the fight against terrorism and fundamentalism.

France has received messages of solidarity and fraternity from countries around the globe, and we must take their full measure. Our response must be commensurate with the crime committed against us, first by seeking the perpetrators of this act of infamy, and then by making sure they are arrested, tried and punished very severely. And everything will be done to apprehend them. The investigation is now moving forward under the authority of the Ministry of Justice. We must also protect all public spaces. The government has implemented what is known as the Vigipirate Plan on “attack” level, which means that security forces will be deployed wherever there is the hint of a threat.

Finally, we ourselves must be mindful of the fact that our best weapon is our unity: the unity of all our fellow citizens in this difficult moment. Nothing can divide us, nothing must pit us against one another, nothing must separate us. Tomorrow I will convene the Presidents of both assemblies as well as the political forces represented in Parliament to demonstrate our common resolve.

France is great when she is capable of rising to the test, rising to a level that has always enabled her to overcome hardships. Freedom will always be stronger than barbarity. France has always vanquished her enemies when she has stood united and remained true to her values. That is what I ask you to do: to join together, all of you, in every way possible; that must be our response. Let us join together at this difficult moment, and we shall win, because we are fully capable of believing in our destiny, and nothing can weaken our resolve.

Let us join together.