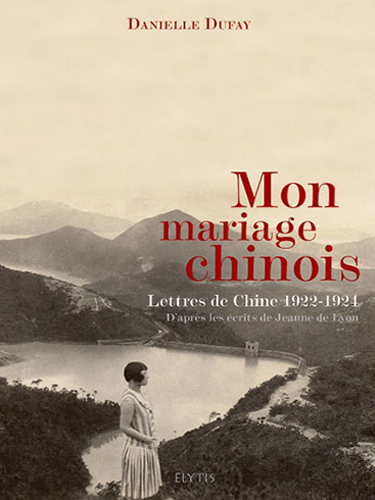 Published by Elytis in 2004, "Mon mariage chinois : Lettres de Chine 1922-1924" (My Chinese marraige: Letters from China 1922-1924) is based on a true story of an extraordinary destiny. "Mon mariage chinois" is an epistolary novel filled with photos of Hong Kong and China in 1920s.

Born in Lyon, France in 1886, Jeanne Rambaud, who later on took Jeanne de Lyon as her pen name, met a Chinese student while she was in England. Courted by this gentlemen of good manners and education, Jeanne fell in love with him. However, he regularly rejected their union without any further explanations.

They were eventually married in 1913, right before he returned to the the Middle Kingdom without her. Soon the First World War broke out.

In 1922, she embarked her journey to China from Marseille, to have reunion with this "stranger". Doubts began to appear: "How will this trip take place? What, then, is this country of which she knows nothing? Who really is this husband whose traits she has forgotten?"

Danielle Dufay is actually the grand-daughter of Jeanne de Lyon, who traced back the travel writings for this book. From the account of the arrival in China to the diary of his grandmother. this piece of work itself is a vibrant and fascinating painting of China in the 1920s.

Drinks will be served at the session. Free entry. RSVP required. Language: French