Maryse Kraatz, director of the the French Chamber of Commerce and Industry, has been bestowed upon Knight of "l’Ordre National du Mérite" by Mr Arnaud BARTHELEMY, Consul general of France in Hong Kong and Macau, on March 29th 2012 at the French residence. 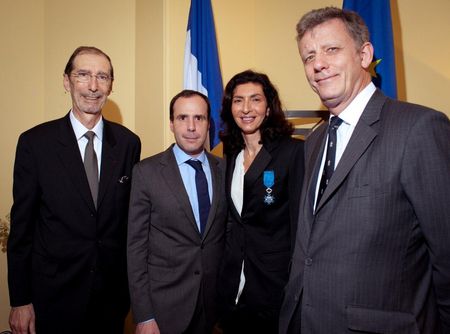 Maryse Kraatz’s relatives, her daughter Margot and her mother who came especially from France, but also many guests were present for the occasion. Mr Arnaud BARTHELEMY, Consul general of France in Hong Kong and Macau, congratulated her for her outstanding career.

Her early ties with Hong Kong

Maryse Kraatz started working in the financial world, in French banks in Europe first, then in Hong Kong, before pursuing her career in Consulting. Acknowledging before everyone the potential of French brands in Hong Kong, she contributed notably to the success of the brand "Tartine & Chocolat" among Hong Kong families.

in the early 2000s, Maryse Kraatz was working on the development of economic ties between Hong Kong and France. She organized in 2003 the Conference : "le Monde chinois – L’avenir en marche" (Chinese World - the future moving) that more than 300 contractors, sinologists and French officials attended.

Development of the Chamber of Commerce and Industry

Maryse became director of the Chamber of Commerce and Industry in 2008. Since then, she never ceased to promote economic ties between Hong Kong and France.

The Chamber of Commerce and Industry has recently welcomed its 800th member. It is currently the largest European Economic Chamber established in Hong Kong.

Each year, the French chamber more than 40 French companies to settle on the Hong Kong market. In her speech, Maryse Kraatz especially thanked the entire staff of the Chamber of Commerce and Industry of Hong Kong for their work and their effectiveness.

In addition to playing an important economic role, Maryse Kraatz has always tried to enhance the role of women in professional circles.

She was the founder of the Women On Board Club, which assists women in their professional careers and creates bonds of solidarity between them.

To read the speech of the Consul general, Click here