Home > Culture, Education and Science > News > Research and Higher Education > Lecture of Pr Solomon about the controverse on the discovery of Plague (...) 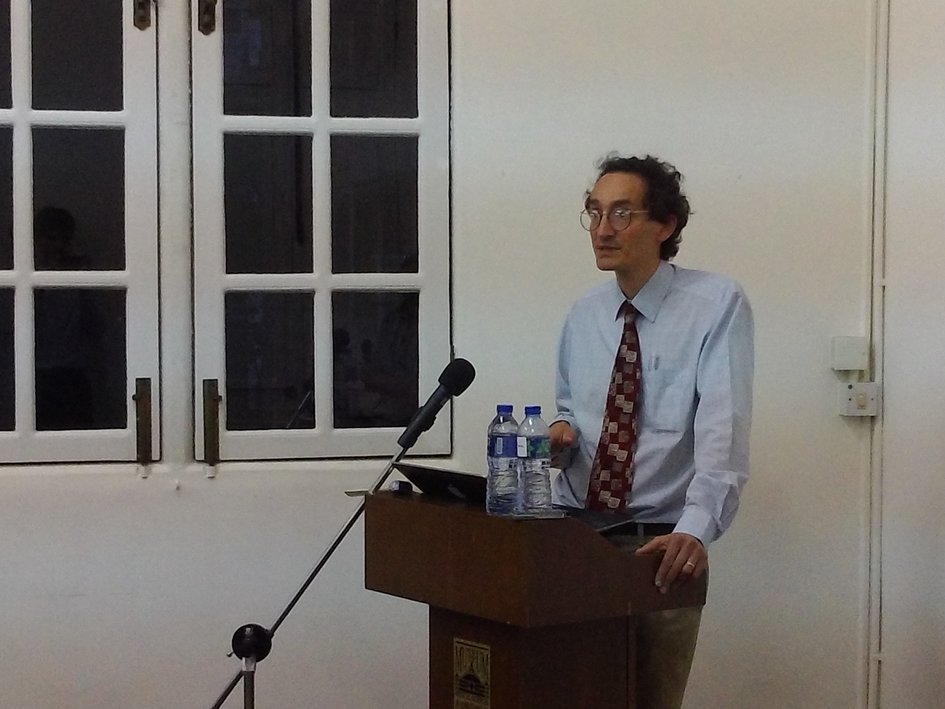 Head of the Institute of Infection and Global Health of the University of Liverpool, Professeur Tom Solomon is a specialist of infectious diseases. Passionate about the history of those diseases, Prof Solomon presented a lecture about the race between Alexandre Yersin and Shibasaburo Kitasato for the discovery of the plague bacillus which occurs 120 years ago in Hong Kong. 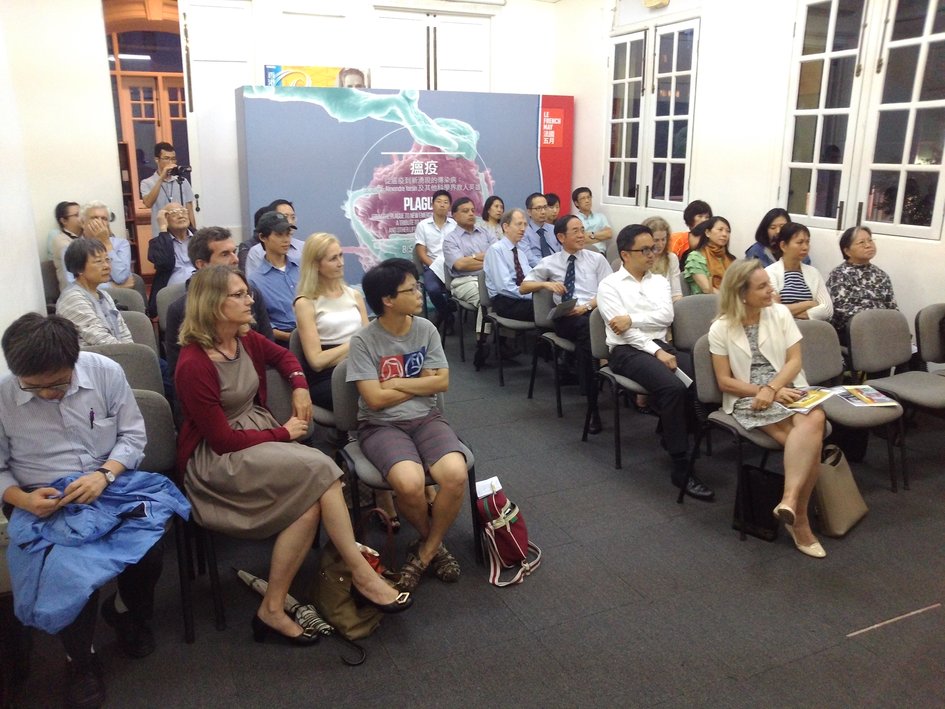 This fascinating lecture in the Hong Kong Museum of Medical Sciences [HKMMS] was the last activity organized around the 120th anniversary of Plague bacillus by Le French May. The "Plagues" exhibition is still open at HKMMS until 28th of June.

“PLAGUES” is an exhibition that unravels the history of the plague: the devastating effects of pandemics, the battle to identify their sources, and the prospects of new outbreaks and challenges from new emerging infectious diseases. This exhibition invites you to explore the inspiring life of Alexandre Yersin, a man of scientific excellence, humanism and adventure.

And to discover other Science Heroes and learn more about the scientific and medical collaborations between France and Hong Kong, and its implications for world health. Plague. The very word carries an unholy resonance, from the infamous disease characterised by fever, buboes and delirium to any contagious disease that spreads rapidly and kills many people. It has shaped history with a mysterious and apocalyptic power!

Hong Kong, 120 years ago: Yersinia pestis, the bacillus responsible for centuries of death yielded its identity to humanity’s advancing technologies and to a French-Swiss maverick doctor, Alexandre Yersin. Working from a makeshift straw hut laboratory in Kennedy Town, in just a few days Yersin identified the plague bacillus that was responsible for the outbreak of bubonic plague that was to spread across the world. Hong Kong, nowadays: A scientific medical collaboration between France and Hong Kong perpetuates through the HKU-Pasteur Research Pole founded by the Institut Pasteur and the University of Hong Kong. This relationship builds on synergies between its partners with the goal of establishing the capability to detect, contain and treat new plagues promptly in both the developed and developing worlds.

Being at the same time an explorer, an ethnologist, a sailor, a farmer, a geographer, a physician, a scientist, an humanist and the last-living disciple of Pasteur, died in 1943 in Nha Trang, Alexandre Yersin is above all a discreet and unsung hero. As a bacteriologist, this Franco-Swiss doctor entered Louis Pasteur’s research laboratory at the École Normale Supérieure in 1986 and joined the recently created Institut Pasteur in 1889 as Emile Roux’s collaborator. With him, he discovered the diphtheric toxin. In 1894, the Institut Pasteur and the French Government asked Alexandre Yersin to go to Hong Kong to study a deadly plague epidemic coming from Mongolia. He succeeded to isolate the Bacillus responsible for the disease, which was his greatest achievement.

About the Institut Pasteur

The Institut Pasteur was founded in 1887 by Louis Pasteur, the famous French chemist and microbiologist. The Institut is at the forefront of the battle against infectious diseases and has been responsible for breakthrough discoveries in research into diphtheria, tetanus, tuberculosis, poliomyelitis, influenza, yellow fever and plague. Since 1908, eight scientists from the Institut Pasteur have been awarded the Nobel Prize.

HKU-Pasteur Research Pole is a medical research laboratory that brings together two world-class academic and research institutions, HKU and Institut Pasteur, for the common goal of generating biological knowledge to advance the understanding and treatment of infectious diseases. HKU-PRP will provide opportunities and support for outstanding young scientists to undertake interdisciplinary research by harnessing the resources of the local and international environments in HKU and Institut Pasteur. HKU-PRP is a member of the Institut Pasteur International Network, which is comprised of 32 institutes sharing the same vision, and engaging in collaborative work for scientific research on the curbing of infectious diseases, training of specialists and improvement of public health services.