Discover French culture with food, drinks, music, visual arts, and more for 3 days in a row!

Based on the traditional aesthetic of Alsace typical architecture, Le French May is recreating a village from this cultural and historical region in eastern France, and thousands of people are invited to come and enjoy the celebrations and experience festivities.

As a tradition, food and drinks are a major part of street and outdoor celebrations in France. At this 3-day launch party you will able to sample authentic flavours from French cheeses, specialties from the delicatessen, fresh seafood, heart-warming dishes to sumptuous refreshing wines and thirst-quenching beers from the major sponsor Kronenbourg 1664. Find yourself immersed in a typical Alsatian village with a great selection of restaurants and wine shops that will showcase the best of gastronomy from Alsace, the Festival’s partner region for Le French GourMay 2016: B.A.M, Maison Argaud & Centre du Vin, Cococabana, Frensh.hk, LaBoucherie.com.hk, Le Port Parfumé, M&C Asia, Monsieur Chatté, PillariWine, Popsy Modern Kitchen, Tartine and with the participation of Deliveroo.

Musical and urban art entertainment: walking brass bands, joyous creativity of acrobatics, and open-air street graffiti party! The 9 musicians and acrobats comprising the French Fun Brass and Dancers issued from the Cirque Eloize will entertains guests all day long for the 3 days with 4 different acts full of creativeness. The Brass band & percussion will interpret masterpieces of classics French movies’ soundtrack like “Les Demoiselles de Rochefort » « Les Parapluies de Cherbourg » by Jacques Demy, « Borsalino » de Jacques Deray… They might also prepare a special concert especially shaped for you! To illustrate Le French May theme in an urban style, Bao and Miguel, talented graffiti artists, will perform a live show for the 3 days.

Media Contact: All texts and HD images related to Le French GourMay 2016 can be downloaded at: https://goo.gl/Cmo57c

Business France is the national agency supporting the international development of the French economy, responsible for fostering export growth by French businesses, as well as promoting and facilitating international investment in France. It promotes France’s companies, business image and nationwide attractiveness as an investment location, and also runs the V.I.E international internship program. Founded on January 1, 2015 through a merger between Ubifrance and the Invest in France Agency, Business France has 1,500 personnel, both in France and in 70 countries throughout the world, who work with a network of public- and private-sector partners. 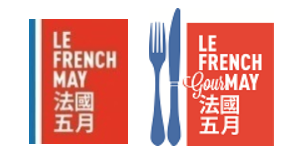 Established in 1993, Le French May (www.frenchmay.com) is one of the largest cultural events in Asia. With more than 150 programmes presented across two months, it has become an iconic part of Hong Kong’scultural scene that reaches out over 1 million visitors each year.

Being an important part of Le French May since 2009, Le French GourMay (www.frenchgourmay.com) has been celebrating and promoting the French food and wine culture in Hong Kong and Macau. It has become in a few years, thanks to a strong communication and involvement of the gourmet community, a major food and wine festival. Every year in May, Le French GourMay presents a different region (Midi-Pyrénées, Rhone Valley, Provence, Burgundy, Bordeaux etc.), introducing and encouraging people to experience the dining culture in French style and letting go through an authentic French gastronomic journey through a network of over 200 local partners.