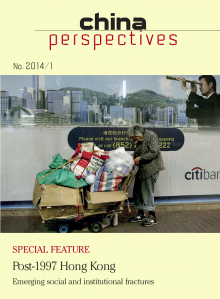 From the editor’s introduction: Post-1997 Hong Kong was characterised by emerging fractures, tensions, and conflicts. But these fractures, tensions, and conflicts are not quite those anticipated by either the pessimists or the optimists. Apparently, the impact of decolonisation on Hong Kong’s institutional structure was hugely under-estimated. The question of political mandate and legitimacy turned out to be a major problem haunting Mr. Tung Chee-hwa, Mr. Donald Tsang, and now Mr. Leung Chun-ying. Brian Fong’s analysis of the disconnect between the executive and the legislature best illustrates the institutional fractures in the existing system of the Hong Kong SAR. The idea of avoiding politics in the design of the Basic Law and Beijing’s resistance to party politics (e.g., the political “neutrality” of the Chief Executive in terms of his/her non-affiliation to a political party) turned out to be major political problems after the process of decolonisation. Other problems, such as income inequality, have been around for many years, but in the past they were seldom taken up by the government as key policy concerns. Poverty relief has been discussed, but little has been achieved in terms of major breakthrough in policy innovation. Kim Ming Lee, Benny Ho-pong To, and Kar Ming Yu look at the growing social tensions in the light of growing income disparity and the inadequacy of government policy in dealing with the situation of social polarisation. Chi Kit Chan, making use of secondary survey data on local identity, probes the question of local Hong Kong people’s ambivalence towards China as their nation and their resistance to a top-down approach to build national identity. Indeed, the Hong Kong/mainland relationship is quickly becoming a hot issue. Tai-lok Lui also looks at regional and national integration but from a different perspective. He examines the changing opportunities for Hong Kong residents to work on the mainland. Instead of seeing more and more young people from Hong Kong finding employment opportunities across the border, he finds that relevant official statistics suggests otherwise. Contrary to many people’s expectation that the further opening of the Chinese economy would automatically bring about new openings and opportunities for Hong Kong people, the number of Hong Kong residents working on the mainland has been declining since 2004.

For more about the special feature on Hong Kong and the table of contents please see our website: www.cefc.com