Home > The Consulate General > News > Consulate news > International Day for the Elimination of Violence Against Women on 25 (...) 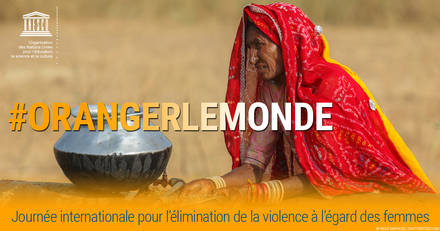 To commemorate the 2016 International Day for the Elimination of Violence Against Women, UNESCO draws attention to the effects of climate change and scarce resources in intensifying violence against women and girls. A timely issue as the Paris Agreement enters into force and leaders meet at COP22 in Marrakech. Climate change is a threat multiplier. It can contribute to crop failure and a decline in food production, the displacement of populations and species as well as increased economic pressure at home due to lost livelihoods following climate-induced natural disasters.

Although entire populations are affected by climate change, it is women and girls who pay the heaviest price. Most often due to the traditional roles they take up, women heavily rely on natural resources and are responsible for securing food, water and fuel for cooking. In times of drought, the search for safe water can take up to 8 hours a day leaving them vulnerable to assault, rape or kidnapping. They face social, economic and political obstacles that limit their ability to deal with change and threatens their security. When a country or a region faces a natural disaster, violence against women becomes less of a priority and mechanisms to protect them weaken. Women and girls often lose their support system after having been displaced and fall more vulnerable to trafficking. They are also disadvantaged in accessing a quality education, which makes them more likely to be unwitting victims of their environment.

In 2005 in Mississippi, United States, a 45% increase of sexual assault cases was observed over the 7-month period after Hurricane Katrina. There was also a 300% increase in domestic violence after two tropical cyclones hit Tafea Province in Vanuatu in 2011. In New Zealand, during the weekend of the Canterbury earthquake in 2011, there was a 53% increase in callouts to domestic violence. In many regions affected by natural disasters, data is, however, not available or very limited. To better address this issue, data on violence against women should be systematically collected following a natural disaster.

Women stand at the heart of communities. Their extensive knowledge on the management and use of natural resources are key to tackling climate change processes, in particular with water management and risk preparedness. Women and girls represent an enormous potential that must be integrated in the solutions to climate change. The full participation of girls and women — and their leadership — is critical to adequately respond to the effects of climate change.

To know more about the International Day for the Elimination of Violence Against Women, please click here