In the heart of Greater Lyon: Lyon Confluence, a unique urban project at the gateway to Europe

The Confluence peninsula, at the point where the Saône flows into the Rhône, is the focus of one of Europe’s biggest city-centre urban development projects. 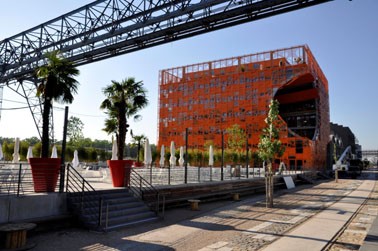 The challenge is to take an area that has long been devoted to industrial use and turn it into one of the new hubs of Greater Lyon. This unparalleled development project will double the area of central Lyon and enhance the city’s status as an international metropolis.

The Lyon conurbation, within easy reach of Switzerland, Germany and Italy and not too far from Spain, enjoys a strategic location at the intersection between northern and southern Europe. At the crossroads of the major European trading routes, Lyon is at the heart of a dense rail, motorway, air and river network. High-speed trains (TGV) link Lyon to Paris in under two hours and to Brussels in 3 hours 40 minutes. The motorway network provides access to leading business centres. Frankfurt, Barcelona, Geneva and Brussels are linked by a seamless network of high-quality motorways. Lyon-Saint Exupéry airport has services to around 100 cities, including over 70 outside France. As far as river transport is concerned, Edouard Herriot port is a busy goods distribution and transit hub and is currently home to 70 businesses.

Lyon Confluence, one of the largest city-centre urban development projects in Europe, looks to be one of the most ambitious in these early years of the 21st century. The project, which covers an area of 150 hectares to the south of the Lyon peninsula, is based on the concept of the wholesale redevelopment on an international scale of industrial wastelands in cities located on major rivers. It is an enormous project, comparable with the redevelopment of docklands in London or Hamburg.

The project arose from the determination of the Rhône-Alpes Regional Council and the French Environment and Energy Management Agency (ADEME) to be part of a “programme of investment in the future”, designed to produce positive-energy individual buildings and blocks. The idea is not to do away with what is already there but to work with it and revitalise it. As a business district but also a residential neighbourhood, the area is unique in combining housing, shops, offices, museums, leisure centres, a university and more. Its outstanding geographical location, providing easy links with Europe and the rest of the world, is attracting decision-makers, developers and investors from all over the world, keen to see what it has to offer.

In 2004 the project was the winner of the European Concerto programme, which was designed in light of the Kyoto Protocol to speed up the introduction of eco-construction combining high environmental quality and the use of renewable energies. Over four million euros of subsidies have been allocated by the European Commission via the programme. Greater Lyon has also entered into partnership with NEDO (the Japanese equivalent of the ADEME) to improve the energy performance of the Confluence, particularly the waterfront area (through the Hikari project for Block P). Lyon Confluence has already been listed as an eco-neighbourhood by the French Ministry of Ecology and Sustainable Development and is now the first neighbourhood in France to be officially recognised by the international conservation organisation, the World Wide Fund for Nature.

This huge project is the perfect prototype for new-generation development projects. Following on from the first phase of the Confluence project (2003-2015), the second phase of the development is set to run from 2010 to 2025. It is based on a design by Swiss architects Jacques Herzog and Pierre de Meuron, working in conjunction with the French landscape designer Michel Desvignes. Herzog and de Meuron are among the best in the world and have always had a close relationship with contemporary art. One of their projects was the National Stadium for the 2008 Olympic Games in Beijing. They were also responsible for the transformation of a disused power station in London to the extremely popular museum of modern art, Tate Modern.

Experts in architecture and urban development from all over the world are involved in the process of transforming the peninsula. They include the Dutch firm MVRDV, the Austrian Coop Himmelbau, French and British team Jakob and MacFarlane, Italian Massimiliano Fuksas, Japanese Kengo Kuma, and Christian de Portzamparc, Odile Decq, Manuelle Gautrand and Jean-Michel Wilmotte, who are all French.

The architectural diversity of the project is the result of the creativity of the chosen designers, all of whom have earned an international reputation. Some structures are particularly eye-catching, such as the Orange Cube created by architects Dominique Jakob and Brendan MacFarlane. Another is the impressive Regional Headquarters building designed by Christian de Portzamparc. Not far from there, the former Customs House combines art galleries and a French-Japanese restaurant with a unique interior design.

“The meeting between people, energy and ideas that characterises the Confluence embodies a promise of harmony and quality of life for everyone, and symbolises the renewal of the Lyon conurbation, a European metropolis undergoing constant change,” according to Gérard Colomb, senator and mayor of Lyon and president of Greater Lyon.