The 9th plenary meeting of Hong Kong - France Business Partnership (http://info.hktdc.com/hk-fr/) was successfully concluded on March 18 at the Convention Center.

On this occasion 16 entrepreneurs and business leaders from Hong Kong and 14 French companies discussed the latest economic developments in both territories; also explored market and partnerships opportunities in digital security, payment solutions, secured transaction of identification and mobility.

This plenary was held in connection with the exhibition of Cartes Asia, the leading smart technologies event in Asia Pacific, during which UBIFRANCE – French Trade Commission organized the French Pavilion with 13 companies; echoing the strong commitment of the French government to employ significant resources in the technological priorities of the "heart of digital sectors." These themes served as a major axis of productive recovery of France, also involve one third of the 34 plans in New industrial France.

The plenary, conducted by Jean Lemierre and Tom Tang, respectively Chairman of the French and of the Hong Kong members, ended with a lunch in the presence of Gregory So Kam- leung, Secretary for Commerce and Economic Development of Hong Kong, Arnaud Barthelemy , Consul General of France in Hong Kong and Macao and Jean Paul Bacquet, President of Ubifrance and Member of the 4th constituency of Puy-de-Dôme , who was on business trip for this occasion.

The Hong Kong - France Business Partnership was signed in 2005 by Mr François Loos and Mr Peter Woo, former chairman of the Hong Kong Trade Development Council. UBIFRANCE, the French Agency for International Business Development and its Hong Kong counterpart - HKTDC, support the operation of the partnership, serving as its secretariat. The partnership’s major activity is an annual meeting of French and Hong Kong members, alternately held in France and Hong Kong. The 10th plenary will be held in France in 2015. 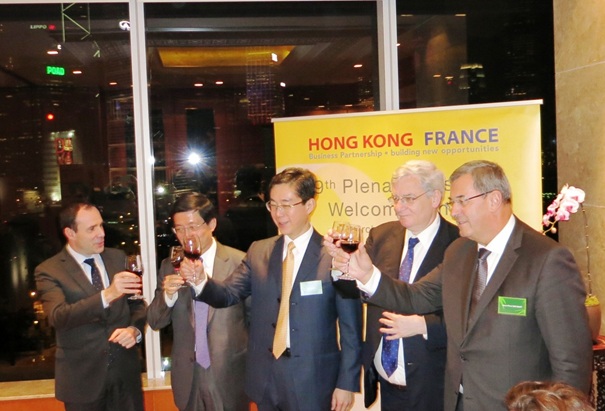