High-speed rail: on track for the future

Public land transport is developing in France and throughout the world, with a growing trend towards high-speed cross-border trains, trams and regional trains. Technological innovations are increasing and French expertise, represented to a large extent by the firm Alstom, has a well-established reputation. 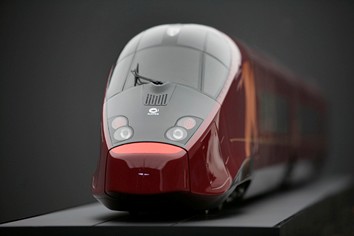 An AGV for the private Italian operator NTV

Alstom has just launched its AGV (Automotrice à grande vitesse) but is already working on another model of high-speed train. As yet the project does not have a name, so the press has dubbed it the AGVII. We already know that it will be capable of speeds of 400 km/h and will come in several versions, with one or two decks (duplex) and a freight model. The world leader in high-speed and very high-speed trains has spared no effort in terms of creativity, an essential feature of this ultra-competitive market. “Eighty per cent of our research and development is carried out in France, internally and with our suppliers, and represents an investment of €800,000 every day,” according to Jérôme Wallut, Managing Director (France) of Alstom Transport. “In this sector, if you’re not moving forwards, you’re going backwards! If we want to carry on being a flag-bearer for exports, innovation is the only viable option.”

Alstom’s plans are being closely monitored by Russia, Brazil and the United States, amongst others. The new AGV will be able to carry more passengers in order to reduce its operating costs. Such is the price of success: some routes are saturated and as it is impossible for trains to get longer (they cannot exceed 202 metres without a knock-on effect on infrastructure, particularly platforms), the only option is to increase their capacity whilst maintaining levels of comfort. Technical components are therefore optimised to leave as much space as possible for travellers.

The new train will also be completely interoperable. The word may be less than appealing but it expresses a major shift in transport, symbolised by the recent opening of the Frankfurt/Marseille route, the first long-haul international connection (a seven-hour train journey), which is set to be followed by other destinations throughout Europe. Crossing borders with high-speed trains that are compatible with different power supply, signalling and safety systems is one of Alstom’s unique features.

The arrival of private operators in the sector is another significant change. “It’s a sign that high-speed transport in Europe will continue to grow,” believes Jérôme Wallut. “It offers the best quality-price ratio in terms of sustainable development and both Brussels and national governments are supportive of infrastructure projects.” The AGV has been purchased by leading Italian private operator NTV. In Great Britain, the Virgin group has opted for the high-speed Pendolino train, which has a system enabling it to tilt around bends and therefore travel at 250 km/hour on normal tracks.

The other major trend is “trains for day-to-day life” in the words of SNCF’s Chairman and Managing Director Guillaume Pepy. French regional trains operate in Germany, Spain, Italy, Sweden, the United Kingdom and Australia and regional transport is growing strongly within France itself. Alstom is currently finishing the single-deck Regiolis (ordered in large numbers by the regions), working on seat comfort, lighting, air conditioning, on-board service, passenger information and noise levels – aware that its competitors are not so much other manufacturers as road and air travel! The company is thus making every effort to give the lie to the railway adage that “you pay for trains twice over” by designing trains that are easier to look after in order to reduce maintenance costs and more environmentally friendly with an energy recovery system linked to the brakes.

As far as urban transport is concerned, Alstom’s underground trains are in service in cities ranging from Singapore to Shanghai and São Paulo, whilst its trams run in both Ireland and North Africa. Over 1,700 Citadis trams have been sold, half in export markets, and the range has just been presented in Moscow, with contracts for hundreds of cars at stake. French technology and design are proving attractive and people who are less then keen on overhead electric cables will be delighted by the latest major technical innovation: trams equipped with a ground-level power supply.

Trams are also becoming more compact, which reduces the cost of infrastructure, platforms and depots, and makes them suitable for smaller towns. Another area of focus is the design of step-free public transport which is therefore accessible to everyone. “Towns, regions and national governments give us money and we have an obligation to use it well,” explains Jérôme Wallut. “We don’t just deliver trains: we offer a public service. As a result we attach great importance to recruiting, developing and training our teams. It is the combination of skills, engineers, research centres and university partners that drives the excellence of the French railway industry.”