Full speed ahead for the French tram system 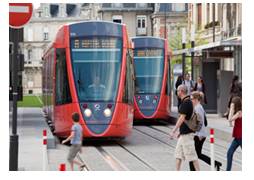 Trams first appeared in the United States in the 19th century. The early ones were horse-drawn. The tram system then developed in many European cities with mechanical traction, using steam, compressed air or superheated water, before changing to electricity.

In France, the golden age of the tram was at the very beginning of the 20th century. Tram lines increased in number until the interwar period. Several factors explain its decline: the development of the automobile, advances in bus technology, and transport policies that favoured the road network.

The oil crisis at the end of the 1970s and growing urban congestion led local authorities to change their general approach in terms of transport. In 1985, Nantes was the first French city to provide itself with a new-generation tram system, operating in its own, separate right of way. In 1988, it was the turn of Grenoble. This was followed by Strasbourg, Lyon, Marseille, Montpellier and a great many other cities. The tram networks of Dijon and Le Havre are due to come on stream between now and the end of the year.

So why have so many French cities been attracted by this form of urban and inter-urban transport on rails? Even if the initial investment is greater, the operating costs are lower than for a bus route. The tram can also be used to connect isolated peripheral areas. And finally, it conveys a positive image of the city as modern and environmentally responsible. In France, most of the construction work for tram systems has been accompanied by regeneration, including restoring the road network, creating pedestrian precincts, and redeveloping districts and public spaces.

For users, it is of course a lot pleasanter to watch the landscape glide by than count the stations and tunnels on the metro! The drawbacks of this form of transport lie chiefly in the cost and the time taken for the major construction work, which disrupts the traffic and interferes with commercial activity.

Can we talk of a “French-style tram”? Regis Hennion, metro and tram director at Kéolis, one of the world leaders in tram system operation, explains that “the French-style tram is a transport tool, but it’s also a tool for urban regeneration. For instance, in Le Mans, people are saying that the city is more beautiful since the tram arrived (…). Today the tram is used to embellish a city.”.Moreover, the French tram runs in its own, separate right of way, in lanes designed especially for it.

The French tram is exporting well. Alstom, for example, is the second-largest tram manufacturer in the world, with 20% of the world market. French players are active in foreign markets, as Régis Hennion explained with an example for Kéolis in Norway, “The town of Bergen was looking for an operator for its tram. We responded to an invitation to tender, and we managed to bring the network on stream from scratch. In this case, we took charge of the start-up, driver training, safety and accreditation aspects.” To work more effectively on the ground, Kéolis – which runs the trams in Melbourne, Porto and Nottingham, among others – usually joins forces with a local partner, in order to fully understand the specific characteristics of each new project. This is a winning strategy when it comes to creating a network suited to the population’s needs.

As the tram operates on its own lines, allowing it to combine the efficiency of the underground in terms of speed, with great accessibility, it is attracting many foreign cities. The Citadis, Alstom’s flagship vehicle, has had an international presence for over 15 years in 16 foreign cities. More than 1,600 Citadis trams have been sold worldwide, half of them exports. José Taborda, vice-president of tram sub-systems at Alstom, explains, “We have equipped 20 French cities, but also Madrid, Tenerife, Casablanca, Rabat, Constantine, Amsterdam and more. We are beginning to respond to invitations to tender in Brazil. Moscow has also approached us to consider the renovation of its system.”

What is its strategy? “In both France and abroad we put forward “turnkey” bids, to include the tracks, rolling stock and signalling. We work hand-in-hand with local authorities to adapt the tram trains to the image of the city.” The Citadis is adjusted to meet the cities’ demands in terms of air conditioning, external painting, interiors and design, etc. For example in Reims, the train’s nose is shaped like a champagne glass! A flexibility that allows the French tram to be aligned with the needs of cities all over the world.

The tram system, a clean, safe and comfortable means of transport, is therefore continuing to attract increasing numbers of cities. Over the next ten years, the predicted annual growth rate of the tram market is 5%. In an increasingly rapidly urbanised world, it seems that the tram is a very promising sector.