Radio France International, France 24 and Monte Carlo Doualiya, boosted by the Arab revolutions and reflecting the concerns of various populations, have gained a considerably larger audience. TV5 Monde and Arte complete the range of French broadcast media whose know-how is promoted by Canal France International. 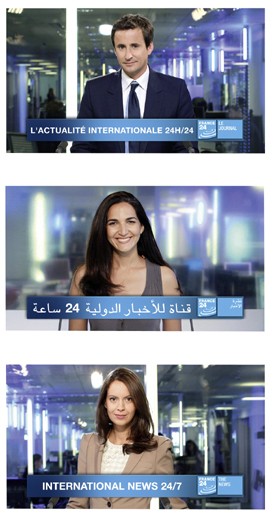 The international French media are very popular. In 2011, France 24, Radio France Internationale (RFI) and Monte Carlo Doualiya attracted over 90 million viewers and listeners, compared with 45 million in 2008. France 24 is watched by 43.5 million viewers every week, four times more than three years ago.

The amalgamation in 2008 of these media within the group Audiovisuel Extérieur de la France (AEF), which merged into a single enterprise at the beginning of 2012, has brought about the development of a global strategy: “There was a need for coordination and harmonisation to achieve greater efficiency and competitiveness,” explains Frank Melloul, director of Strategy, Research and International Development at AEF.

For instance, in the Middle East an Arabic language news centre has been created from the merger between Monte Carlo Doualiya and the Arabic language service of France 24. Monte Carlo Doualiya reaches 7.8 million listeners each week. In this region of the world France 24, since it moved to 24-hour airtime in October 2010, has tripled its audience in the Maghreb, becoming the leading French television channel in Algeria and Morocco, and in Tunisia, where it is now the fourth channel, just behind Al Jazeera and ahead of Al Arabiya. And we have just learned that it is watched by 25% of Libyans!

A resolute stance in favour of multimedia is also a factor in this dynamism. In 2011, the websites of France 24 and RFI recorded nearly 200 million hits. The media of the AEF have 1.5 million fans on Facebook, and over 500,000 Twitter followers via a variety of multilingual pages. Multilingualism is another advantage, and one which proved significant during the Arab Spring. “Our mission concerns the Francophone world of course, but it also addresses Francophilia,” asserts Frank Melloul. France 24 is broadcast 24 hours a day in French, English and Arabic into 183 million homes across the world and RFI broadcasts in 13 languages.

TV5 Monde, the first global channel in French, is 100% committed to promoting the French language. The channel’s managers have even developed educational tools for learning and teaching French, and offer subtitled programmes in twelve languages and in French. 49% owned by the AEF, and based in Paris, TV5 Monde brings together Switzerland, Belgium, Canada and Quebec and reaches 54 million viewers each week. It can be received 24 hours a day by over 220 million homes in 200 countries, making it the second global television network, after MTV and ahead of CNN. A general-interest TV channel, it nevertheless places the emphasis on news (with 18 programmes a day devoted to international news) and original magazine programmes such as L’Œil de la rédaction. TV5 Monde is available on the internet, on mobile phones, on WebTV, on VoD, catch-up TV, connected TV, etc. The “global media” TV5 Monde has 8 million connections each month.

These media make it possible to bring a French viewpoint which is characterised, according to Frank Melloul, by the diversity of the programmes: “We are not the voice of France, but the voice of France’s values”. A multicultural approach is favoured and the schedules have been reworked in order to meet the expectations of the public, which is overwhelmingly keen on programmes such as Reporters or Les observateurs on France 24.

The overview would not be complete without Arte, the French-German general-interest channel which is designed to bring Europeans together, but which also broadcasts its cultural and international programmes in Africa.

The recognised skillset of French broadcasting is shared on a daily basis with professionals from countries of the South, via Canal France International (CFI), a subsidiary of the France Télévisions group and a provider of aid for development of the media on behalf of the French Ministry of Foreign and European Affairs, which operates in 90 countries each year and which ran more than 1700 study days in 160 missions in 2011. There are no ready-made formulas or training programmes, but rather interventions on demand, adapted with flexibility to the realities on the ground by experts from France Télévisions, the AEF, TV5 Monde, Arte France, Canal +, BFM and others. Laurent Allary, an adviser to the chief executive of CFI, gives a specific example: “We advise three television channels in the Maghreb which, to cover the London Olympic Games, will construct a mechanism to suit their objectives, their resources and their working constraints with the aid of Arabic-speaking experts”.

Whether it is about organising a channel, a service or a schedule, presenting a TV news programme, creating a training centre, seeking self-funding resources, launching new programmes or covering elections, CFI supports both those involved in institutional broadcast communication and independent private organisations. It also guides the “new citizen journalists” and social network bloggers, so as to help them, where appropriate, to transform their circumstantial activism into an activity of providing eye-witness accounts, debate or independent journalism. This year, CFI is marshalling exceptional funding of 300,000 euros to support five emblematic UNESCO training projects in the media field. The five countries to benefit are Burma, the Palestinian Territories, the Ivory Coast, Libya and Liberia.

CFI’s speciality is training executives with the prospect “of their becoming future experts, such as the director of an African television channel who shared his experience with his Asian counterparts,” stresses Laurent Allary.

We should finally point out that other institutions are contributing to the dynamism of French public broadcasting abroad: Radio France and the Institut National de l’Audiovisuel, as well as many companies which often work in tandem with the State, such as Canal Overseas, Euronews and the Lagardère group.