This new exhibition of the photographer Philippe Gras marks the 50th anniversary of a month that had a profound impact on French society. It will take place on campus from 6 to 30 November 2018 and will also include special documentary screening of “May 68: A strange spring” on 21 November 2018.

This project is initially offered by Institut Français in partnership with Association des Amis de Philippe Gras and Films des quatre planètes. This exhibition is being presented in 2018 in more than a hundred places in France and across the world. 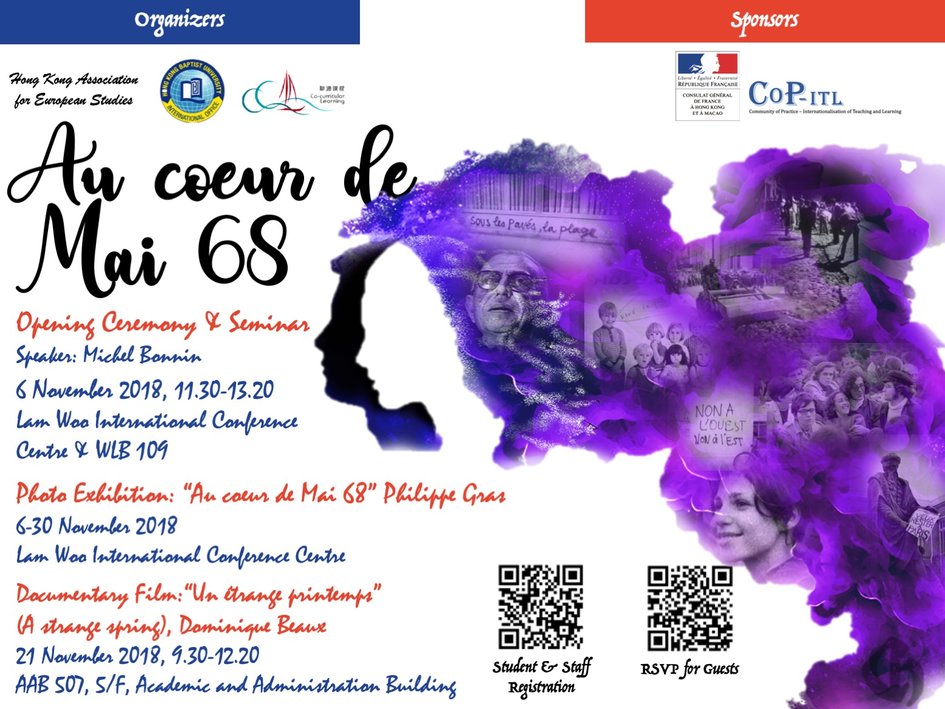 In Hong Kong, the project consists of the striking photography exhibition “Au Coeur de Mai 68” from renowned French photographer Philippe Gras and of documentary feature “May 68: A strange spring” from filmmaker and historian Dominique Beaux.

The exhibition opening will take place on 6th November from 11.30am to 1.30pm at gallery space of Hong Kong Baptist University. The opening will also include special seminar “What happened in May 68 in France? Was it a French Cultural Revolution?” by speaker Professor Michel Bonnin from Chinese University Hong Kong.

It is composed of 43 unpublished new photographies from Philippe Gras rediscovered after his death. 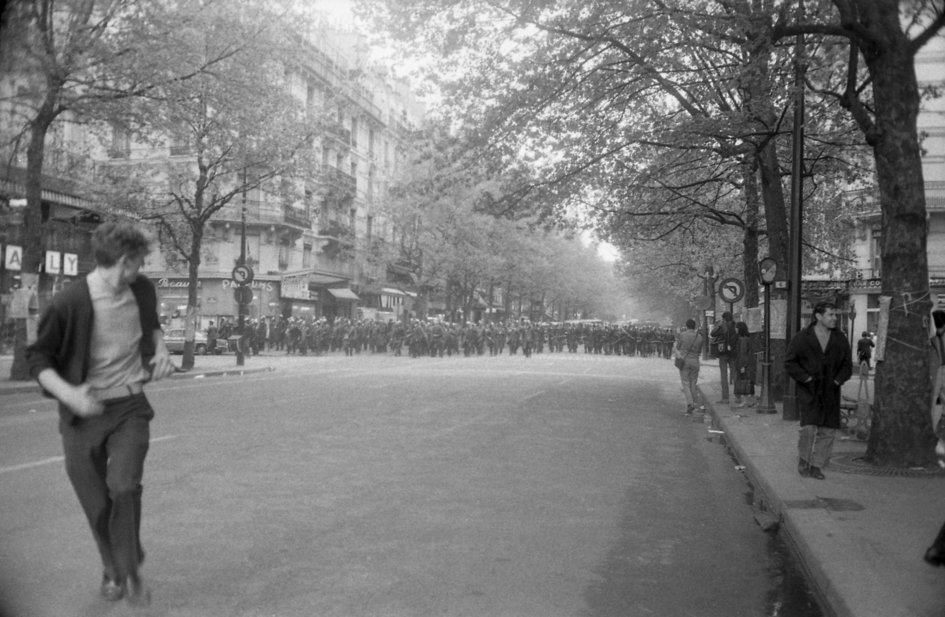 The photographs of Philippe Gras, long unpublished, bring another vision of May 68. The images of this period known so far had a heroic tone : barricades, people throwing stones, a young woman as beautiful as an icon of Liberty carrying a flag on the shoulders of a protester, a student leader smilingly defying a policeman ... It was probably necessary that a crisis having put at risk one of the oldest states in Europe be first embodied by epic photographs.

Philippe Gras shows us almost deserted streets, graffiti in the subway, people picking up cobblestones from the barricades, tired protesters falling asleep, policemen lining up for their snacks. It shows people strolling idly, or a student running away, who knows why, from of a distant cordon of police. Anyone who has participated in demonstrations knows that this is what most people experience in this type of situation. And that’s why, apart from his immense talent, his taste for contrast, his humor, Philippe’s photographs are so deeply moving.

It is possible to go even further by saying that Philippe Gras is a Stendhalian photographer. Let us remember Stendhal’s aphorism: "a novel is a mirror carried along the road." The small facts are as important as the big ones. Let us remember the story of the battle of Waterloo told by Stendhal through the eyes of his young hero, Fabrice del Dongo. Fabrice sees the battle only through a succession of details arising at random. For Philippe Gras, too, it is an ethical choice to take things as they come, but he catches them at the precise moment when they are the most charged with meaning : this man in bourgeois attire who feeds a bonfire , this girl immersed in her thoughts while selling a revolutionary newspaper, these workers on mopeds coming to the Latin Quarter to see how May 68 looks like... and then, there is indeed an epic photograph of protesters climbing the Lion of Belfort, and forming such a perfect pyramid that the picture seems staged like the famous photograph of Marines hoisting the Star-Spangled Banner at Iwo Jima.

There may be another epic picture, of a man throwing a stone, but it’s just a distant shadow in the night. And there is indeed a tragic picture, that of the great actress Madeleine Renaud standing humbly in her duffle coat in front of a crowd, behind a prosecutor seeming to address a revolutionary tribunal in a theatrical pose. And then, fortunately, there are one or two photographs of people in love, because that was also May 68.

Screening of “May 68: A strange spring”

This new documentary film is directed by historian and filmmaker Dominique Beaux. It examines the events of May 68 in Paris from the other side of the barricades, highlighting the complexities of memory as many of those who participated in 1968 explain their thoughts of those events today.

Philippe Gras was an independent photographer, but more important, he had an independent mind, refusing all compromises. All his life, he directed his camera towards works, themes and artists in whom he believed, and with whom he nurtured a deep relationship. He aimed also his camera at social phenomena which were important for him. He never fell in any kind of elitism, all the contrary. By browsing through his archives, one can easily verify that he had a very sure taste regarding advanced creation. But one can as well testify that he devoted equal attention to popular culture and to all kinds of neglected visual productions, and also to musical productions coming from all the continents.

He developed deep and long-lasting friendships with many musicians and creators. Among them was Robert Wilson, whom he met during the original production of Einstein on the Beach and with whom he had an important correspondence.

This event is coordinated and co-financed by: