[This event has been postponed until further notice] For the 6th consecutive year, the French Consulate General in Hong Kong and Macao presents its French Pavilion at the Hong Kong Book Fair in December 2020 (Hall 1A - B15 "international cultural village") under the theme "French Comic Strips". Famous Hong Kong comic book author Li Chi Tak, who did a writing residency at the Louvre Museum, will be our guest of honour this year. The French Pavilion will also pay tribute to the Little Prince, as part of the celebration of the 120th anniversary of the birth of Antoine de Saint-Exupéry.

After Chantal Thomas (2018) and Bernard Werber (2019), guests of the Consulate during the last two editions of the Hong Kong Book Fair, we have invited renowned Hong Kong comic book illustrator Li Chi Tak to be guest of honor thanks to his work "Moon of the Moon" produced in a residency experience at the Louvre Museum.

This year, with a strengthened partnership with Hong Kong Trade Development Council (HKTDC), the French Pavilion is expanding and has an even larger space than in previous years where everyone can drop by, browse, discover a digital exhibition, and immerse themselves in the virtual world of comic books. 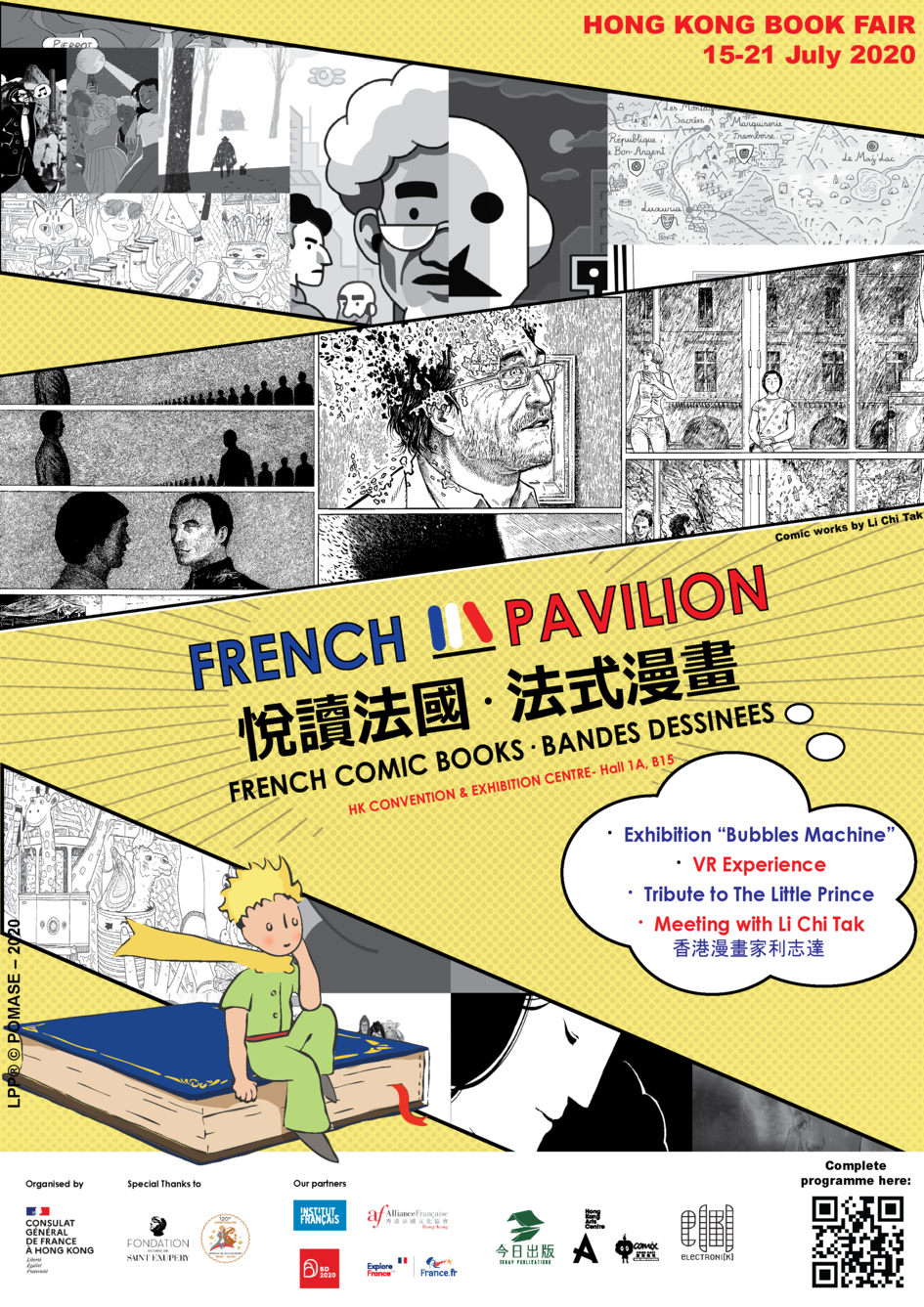 Echoing the Year of the Comic Strips, launched in France by the Ministry of Culture and which takes place in 2020/2021, the French Pavilion celebrates the 9th Art: French comics, classic or contemporary, offers visitors to French pavilion of new forms of digital reading and immersion through a surprising digital exhibition.

The year 2020 also marking the 120th anniversary of the birth of Antoine de Saint-Exupéry, the French Pavilion pays tribute to the great French author and his most celebrated work, The Little Prince, whose graphic illustration is known and appreciated by the global public.

Installations throughout the duration of the pavilion fair:

Digital Exhibition "Bubble Machines" brought by the French Institute (Institut Français) who offers 8 works inspired by comics in digital format. The public will have the chance to discover a new way of approaching the world of comics through augmented and virtual reality by interacting with multiple tablets. More information : https://www.pro.institutfrancais.com/en/programmes-and-projects/machines-a-bulles-exhibition 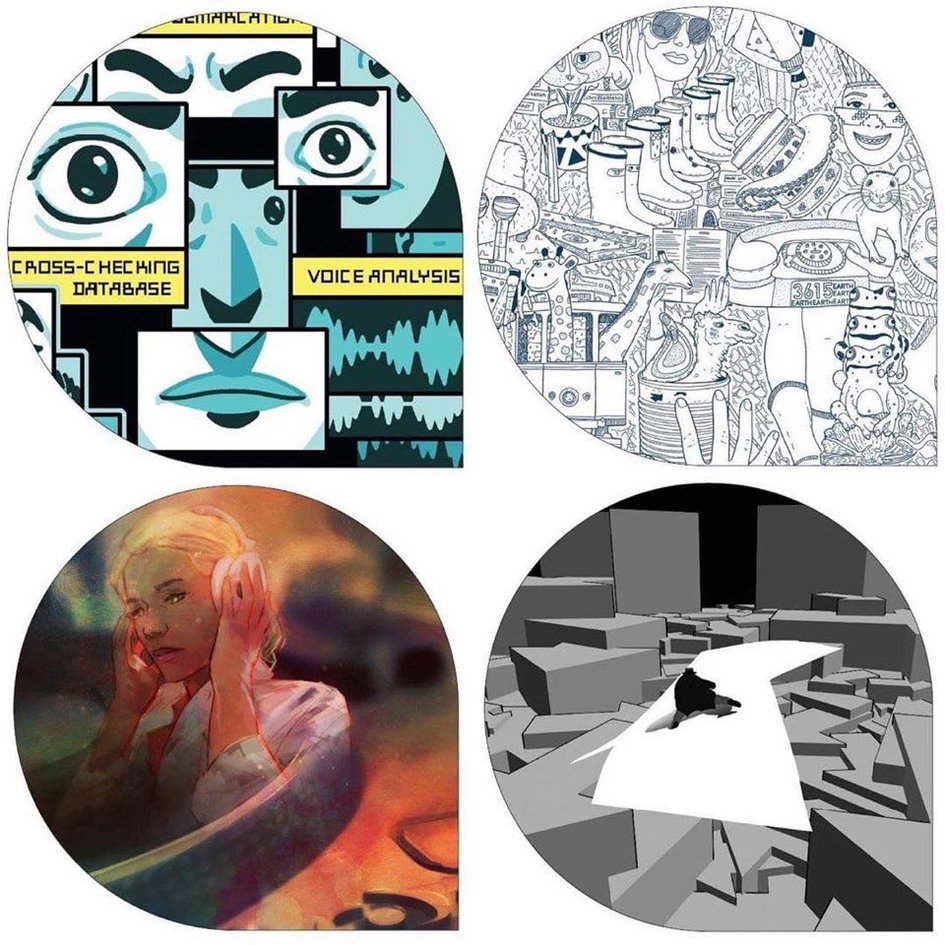 A meeting space with invited authors: signing sessions, activities in partnership with the Alliance Française, the TODAY Publications publishing house and projections devoted to the world of The Little Prince and its author Antoine de Saint-Exupéry are offered throughout the Fair

A reading corner: where you can explore classic and contemporary works of the French comic strips, all translated into English or traditional Chinese. These resources are supplemented by numerous works around The Little Prince , translated into several languages, which the public can consult on site.

Meeting with the invited author Li Chi Tak The famous author and illustrator Li Chi Tak plays a leading role in comics and maintains close ties with France, thanks to an experience he had carried out at the Louvre museum. His comic work "Moon of the moon" was published in French in partnership with the Louvre and the Traditional Chinese version was released in February 2020. A signing session will be organized in partnership with its publishing house, TODAY Publications, who will sell copies of ‘Moon of the moon". 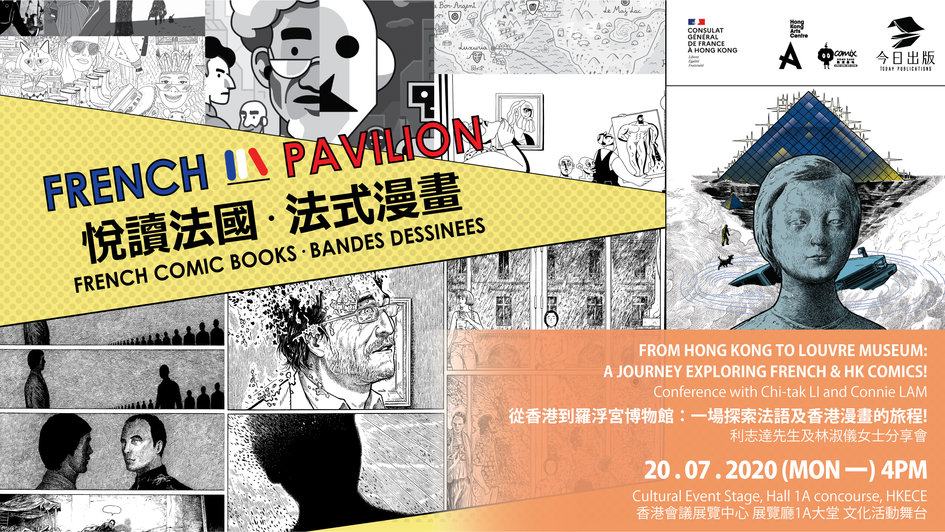 A French Rendez-vous! Come and discover the French language through a fun speak-dating game with French native speakers 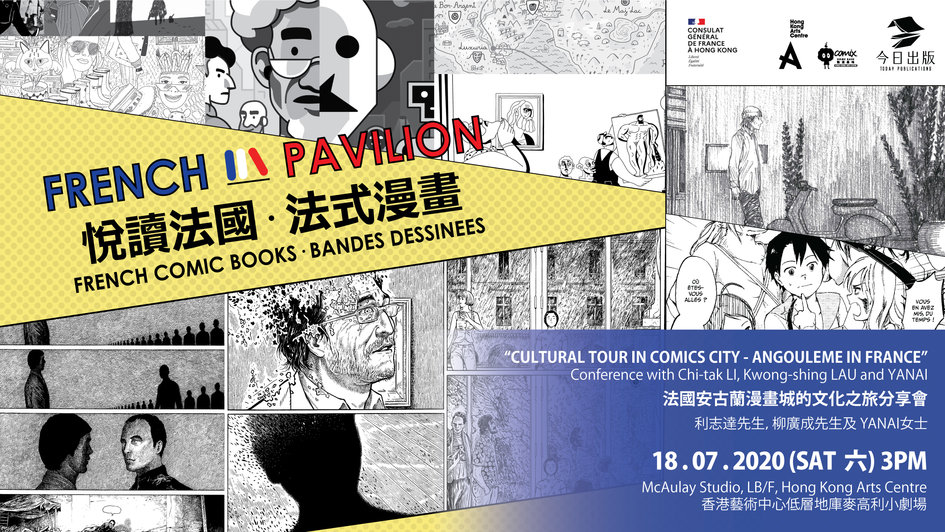 For more information: Official site of the Hong Kong Book Fair 2020: https://hkbookfair.hktdc.com/en/index.html Our pavilion in 2019: https://hongkong.consulfrance.org/French-Pavilion-returns-with-French-Fantasy-to-Hong-Kong-Book-Fair-2019-13021