Paris’s image as the capital of fashion is undeniably part of the reason why other countries have a passion for French hairdressing. But the expertise shown by professionals at using their attention to perfection and inventiveness to impose their style on the international stage is the reason for the persistence of this reputation for excellence. 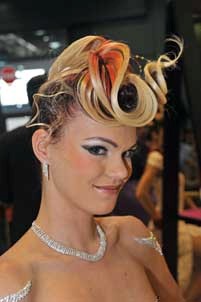 Creative and talented hairdressers pit themselves against one another at international competitions, just like top-level athletes. The prestigious World Championship, Hairworld 2012, beat all the records in Milan: 35,000 visitors attended the three days of competition. 1,100 competitors from 56 countries confronted one another in the 38 categories. The Organisation Mondiale de la Coiffure, which organises the international championships, has over 60 professional organisations and a million salons all over the world among its members. Winners in 2010, the France team reaped many medals at the Milan Hairworld, whether in the very difficult set tests, in the highly classical technical category, or in the fashion category with its eccentric colours and very special cuts.

Hairdressing is a profession of enthusiasts, as Anne Delannoy, deputy director general of the Fédération nationale de la coiffure (FNC) points out: “They love their job. They do lots of training courses, such as in “chignons”, “trends” and “extensions”. In the Federation we produce two collections per year and hairdressers fight hard to get into the design teams.” 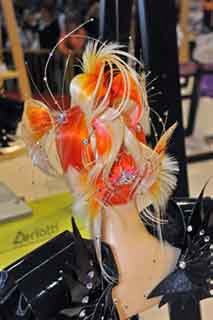 To become a member of the France hairdressing team, you have to be extremely well motivated. The hairdressers selected have nothing to envy top-level athletes. Demanding trainers ensure that they develop their technical skills, their speed and their creativity. This requires a great deal of work and discipline but there is no shortage of skill and recognition here: “Winning competitions gives a boost and a prestige that quickly enables a hairdresser to break through at an international level,” notes Raphaël Perrier, president of the FNC Concours association.

French hairdressing, with an estimated turnover of almost 6 billion euros, is one of the densest commercial activities in the country, with one salon for every 854 inhabitants. It has always had an image of excellence, represented at high level by the private organisation Haute Coiffure Française, a dynamic group which brings together the elites of the hairdressing profession worldwide: 1,500 firms in 36 countries. High-end Japanese, Indian, Thai, Brazilian, Canadian and European hairdressing salons clamour to join this very select club and attend the presentations of its collections, in which they get to see the trends that they will use as inspiration at home. Top brands such as L’Oréal, Dessange and Franck Provost also contribute, of course, to this reputation. 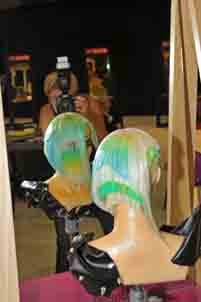 Far from standing still, “the profession has exploded, and that makes it very vibrant,” stresses Anne Delannoy. “We train 37,000 young people every year. There are a lot of schools, public and private, and many of them have partnerships abroad. The quality of our training is recognised, beginning with an initial four-year course, with the possibility of an additional option in one year. With regards to continuing education, this is particularly well provided for and developed in this profession”.

These professionals are to be found on every continent, in many countries, and there is a particularly high demand for the training provided by the FNC’s teams. Academies and international schools very often choose French artistic directors. “French hairdressing has a good reputation everywhere,” points out Raphaël Perrier. Just like in figure skating, there is a French style! It is not a question of modernity: the shaved heads and locks pulled across the forehead that are all the rage in London at the moment will take several seasons to arrive in Paris and will be considerably different. The much coveted “French touch” is composed of “glamour, lightness, romanticism, roundness, softness and harmony,” explains Raphaël Perrier, who also stresses other advantages: “We are familiar with hair of all colours and all kinds, we are more attentive to the client and we are good at adapting”.

The Mondial Coiffure Beauté 2013 Show in Paris will be held at the end of December in the Grande Halle. It is the unmissable international event: in 2012 it attracted 24,400 professional visitors from 39 countries. The forthcoming Hairworld is scheduled to be held in Frankfurt in 2014. In the meantime, here is a brief preview of the spring-summer trend for this year: after a rather short blond winter, you can count on warmer colours, styles that are slightly drawn back and longish hair and fringes, layered but retaining their thickness!