As one of the most talented, charismatic and sought-after guitarists in the world today, Thibault Cauvin is back in Asia and Hong Kong for an exceptional concert organised by the Hong Kong Guitar Ensemble. The young talent will perform masterpieces from the greatest classical guitar repertoire (Albeniz, Domeniconi, Duplessy, Scarlatti, ...). 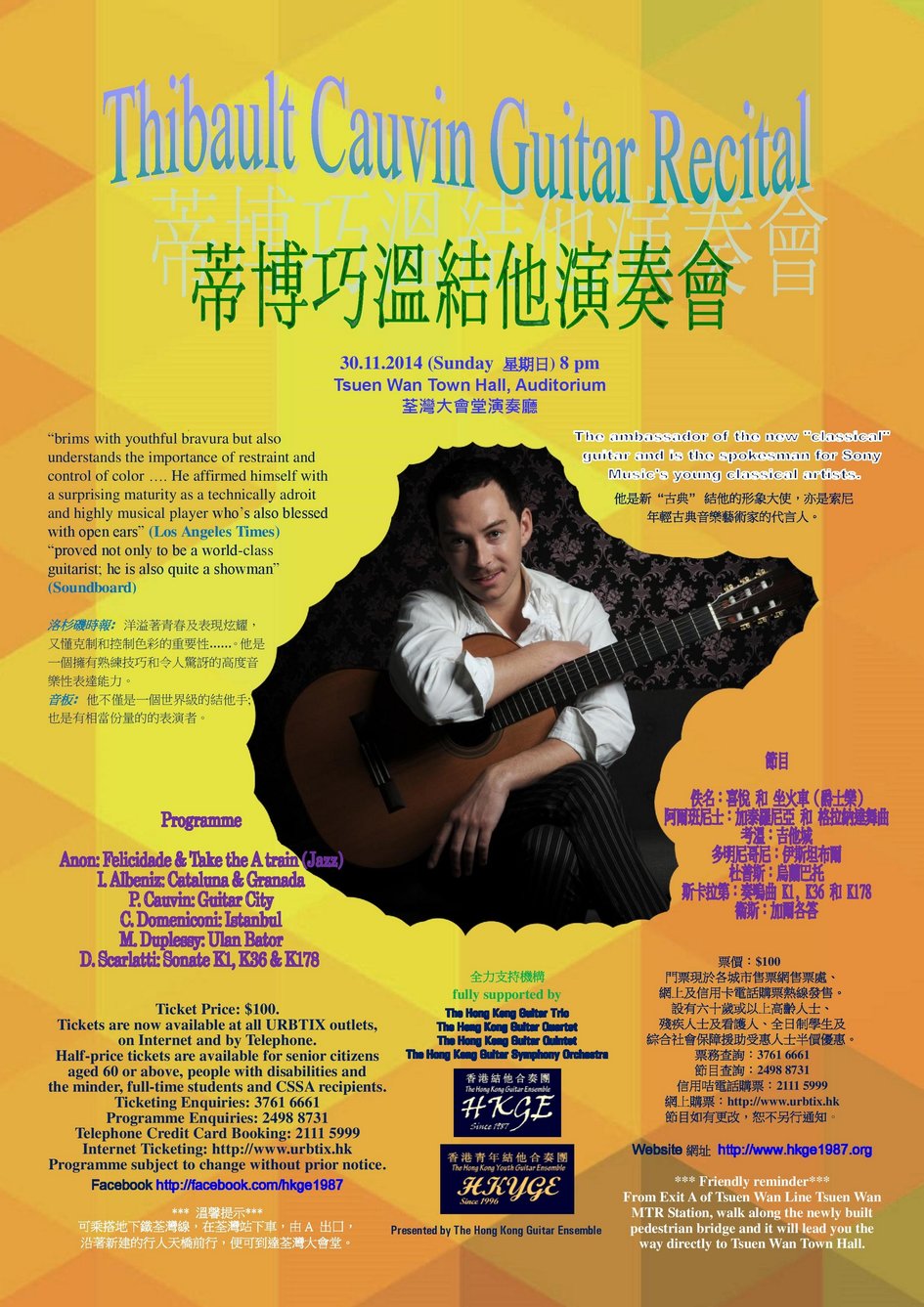 Thibault Cauvin is traveling the globe throughout the year invited by the most prestigious festivals and concert halls, such as the New York Carnegie Hall, the Shanghai Opera, the Moscow Tchaikovski Hall, the London Wigmore Hall, the Hong Kong Opera, the Paris Théâtre des Champs Elysées, the Munich Gasteig, just to quote some of them. He has already given over 1000 concerts in 120 countries, receiving rave reviews by the critics. Thibault has also participated in many TV and radio shows and has cooperated with famous musicians, composers and symphony orchestras. Thibault is considered to be a unique icon in the music world as an innovative and creative performer, always working on the evolution of the classical music.

After having recorded 5 CDs with various labels and having been the subject of the documentary flm "Thibault Cauvin across China" by NP Morin, Thibault signed with Sony Music in 2013. His 1st album within this famous label meets an incredible success. Shortly after its release, the album enters the top 10 french classical music sales and remains there during 3 months. Unanimously, the media qualifes "Dance with Scarlatti", which has also been broadcasted by the world’s most famous radio channels, as "crowning achievement" (4* Classica, «Favorite» of : France Musique, France Culture, Radio Classique, Fnac, Guitare Classique). Today, this album captures the world, and is already available in 20 countries. Some of the pieces fgure on several "best of" compilations, next to Lang Lang, Placido Domingo, or Hélène Grimaud.

From a family of musicians, Thibault began learning the guitar with his father, at the age of 5. After graduating from the Bordeaux and Paris conservatories, Thibault embarked on the international competitions circuit. At the age of 20, he was the frst and only guitarist worldwide to win 13 international frst prizes. The two worlds in which Thibault grew up, the classical music from his conservatories education and the contemporary music coming from his close family, in combination with his great experience of an "endless tour", having started over 10 years ago, have built the foundation of his fascinating personality, which enchants all audiences. Thibault is regularly the guest of honor throughout the world to give master-classes, lectures or to judge competitions in the most prestigious institutions such as the San Francisco Conservatory, the Toronto University, the London Royal Academy, the Beijing University, among others.

Thibault has been appointed « Ambassador of Greater Bordeaux ». The famous Sevillian guitar manufacture « Antonio Bernal » creates two guitar models featuring Thibault Cauvin. Thibault has been endorsed by the American strings company D’Addario for 5 years and is playing a guitar made by Jean-Luc Joie.