The 13th edition of the European Higher Education Fair (EHEF) 2013 was held successfully during the weekend of March 9th and 10th at the Hong Kong Central Library. 50 tertiary institutions from 11 European countries have sent representatives to come to Hong Kong to showcase their quality education to local students. 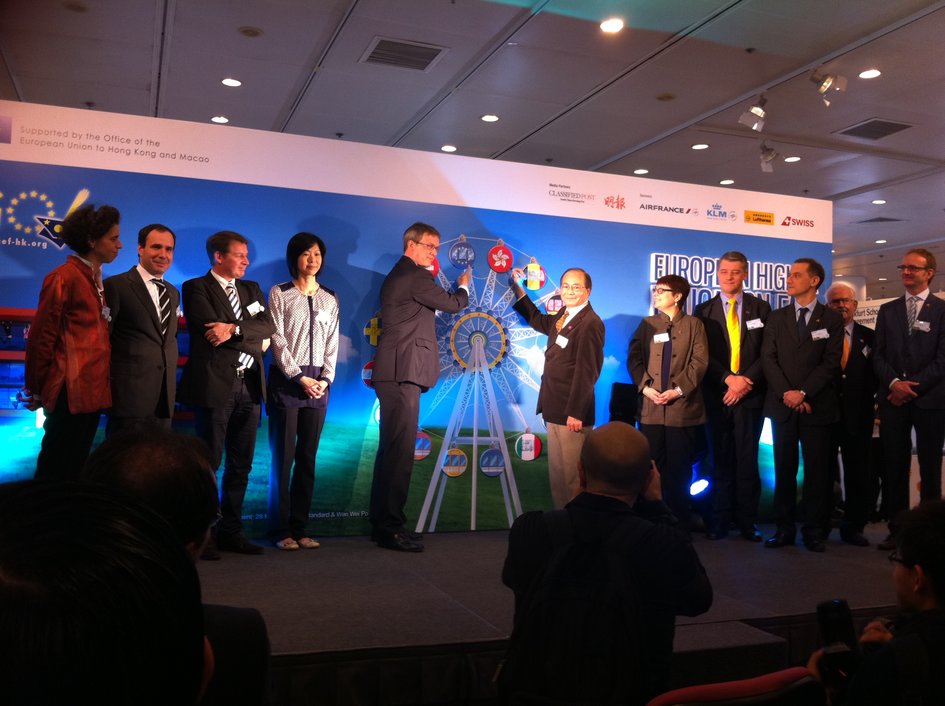 The presence of the Secretary for Education of Hong Kong, Mr. Eddie Ng Hak-kim, SBS, JP, at the opening ceremony has marked the importance of this education event throughout the territory. The ceremony was officiated by Mr. Vincent Piket, Head of the Office of the European Union to Hong Kong and Macau, together with Mr. Christodoulos Margaritis, Consul-General of Greece (acting EU presidency country) on behalf of the EU Working Group for Culture and the EHEF Steering Committee. European Consul-Generals of the EHEF participating countries, including Consul-General of France, Mr. Arnaud Barthélémy, were invited on stage to sign on the backdrop. 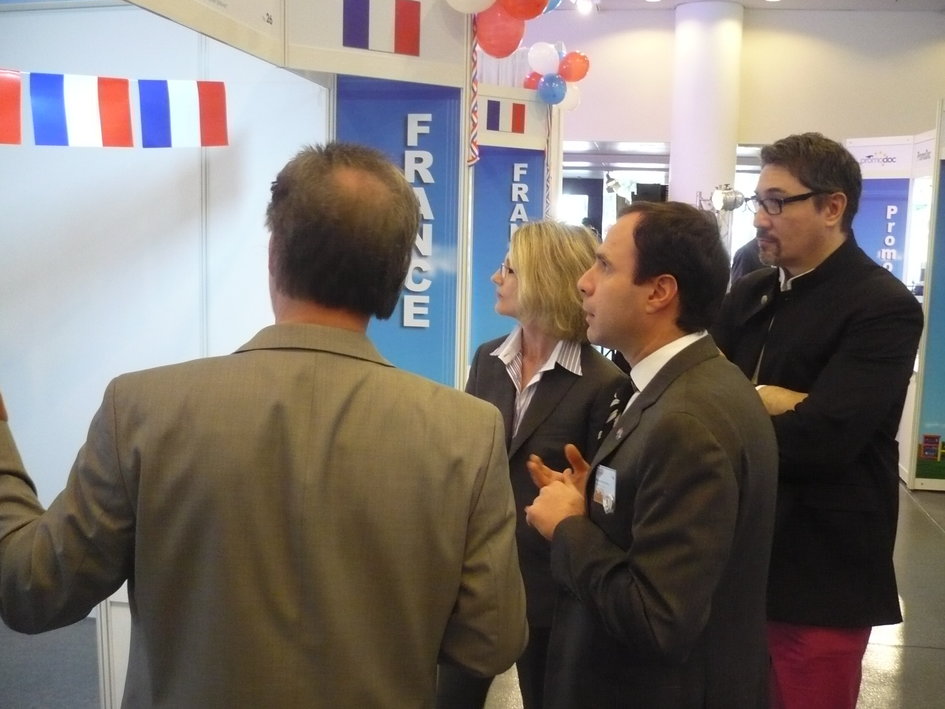 This year, for the first time, the EHEF 2013 cooperated with two media partners covering both English and Chinese press in Hong Kong - Classified Post of SCMP and Mingpao. Advertisements, site banners as well as interviews were published before and during the fair, including an interview with Mr. Louis Cheung, Academic Officer and Campus France Representative of the French Consulate, and Ms. Garfield Chan, an alumnus having obtained a Master’s degree in culture management in France. Such an effective media coverage has attracted more than 4600 visitors to the Fair. 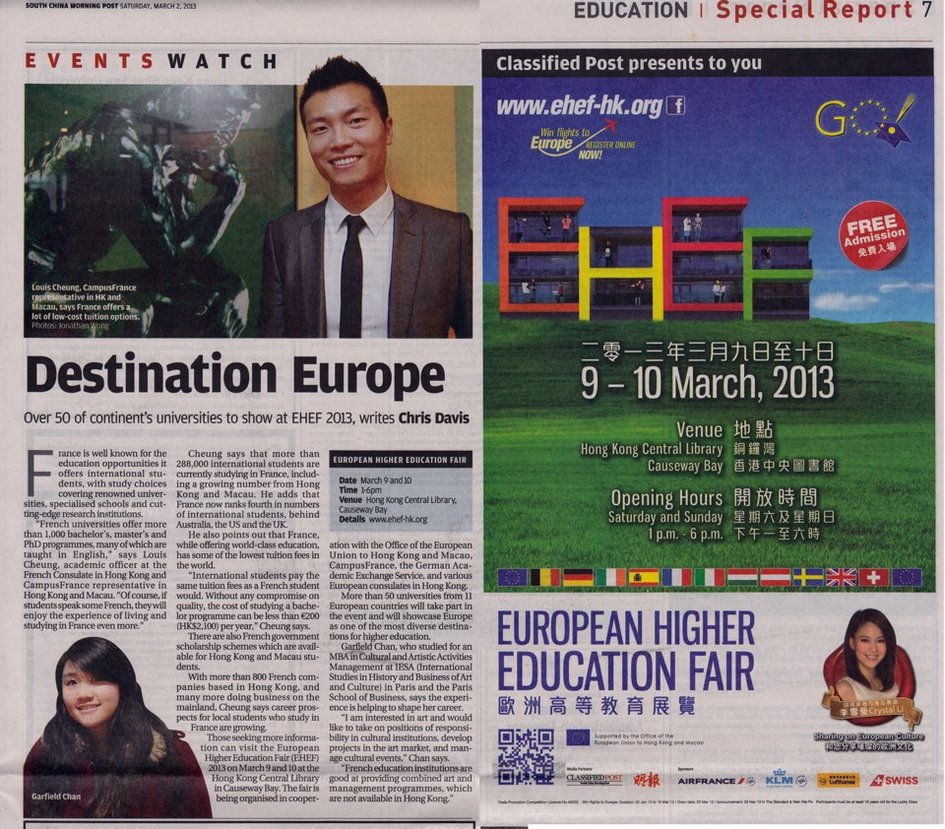 Campus France of the General Consulate of France in Hong Kong and Macau was not only one of the principal organizers of the event, it was also an exhibitor with its own booth to answer students’ general inquiries about studying in France. Besides, 5 prestigious French institutions, specialized in diverse domains of management in brand and luxury, hotel and tourism, art and culture, etc. were present to exhibit their academic offers: 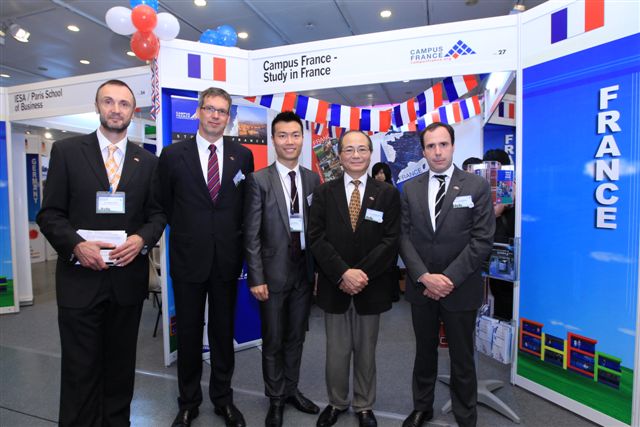 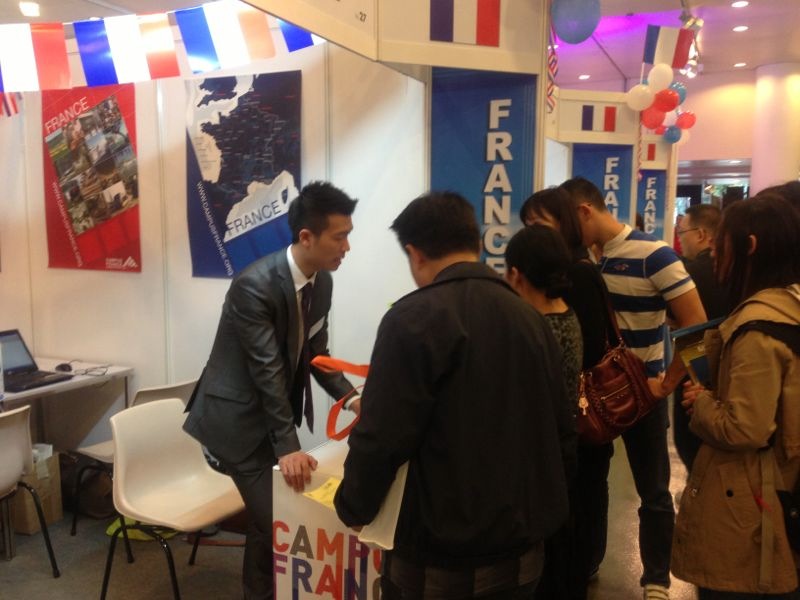 This two-day education fair has welcomed motivated students and their parents to obtain information about studying in Europe, particularly about Bachelor’s and Master’s programmes of French institutions and the benefits of studying in France. Besides distributing informative brochures and answering questions directly at the booth of Campus France, the seminar "Study in France - Let France change your life!" was given by Louis Cheung in both afternoons for a comprehensive idea about studying in France. On the other hand, a language learning session "French with fun!" was hosted by Martine Faure, Attaché of Educational and Linguistic Affairs, presenting French language and culture to the non-French-speaking public. Parallel alumni sharing sessions were held by local university students and alumni who shared their experiences as a student in Europe, with France as one of the top destinations certainly. 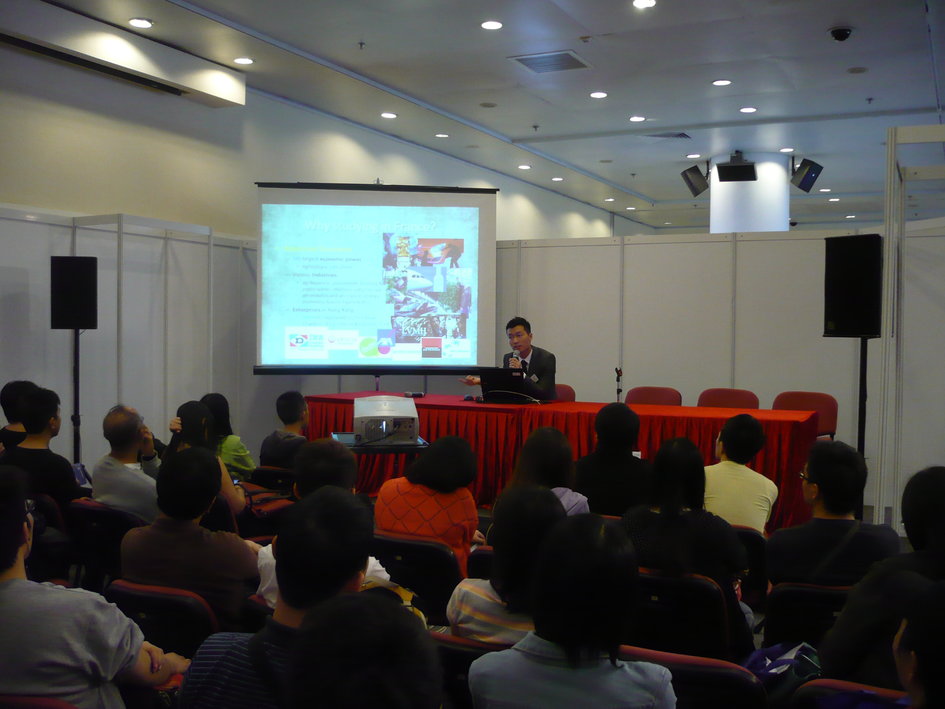 Being the leading destination in Continental Europe for foreign students due to its affordable yet high-quality tertiary education and its rich cultural heritage, France and its institutions have been the important exhibitors and supporters of the annual EHEF in Hong Kong. If you happened to miss the Fair and would like to know more about studying in France, please feel free to consult the Campus France (Hong Kong Office) website at www.hongkong.campusfrance.org/en or contact Mr. Louis Cheung at louis.cheung@consulfrance-hongkong.org.