As part of Le French May, the UA Galaxy Cinemas in Macau, , with the support of Unifrance films presents from June 1 to 7 the second edition of its French Film Festival. 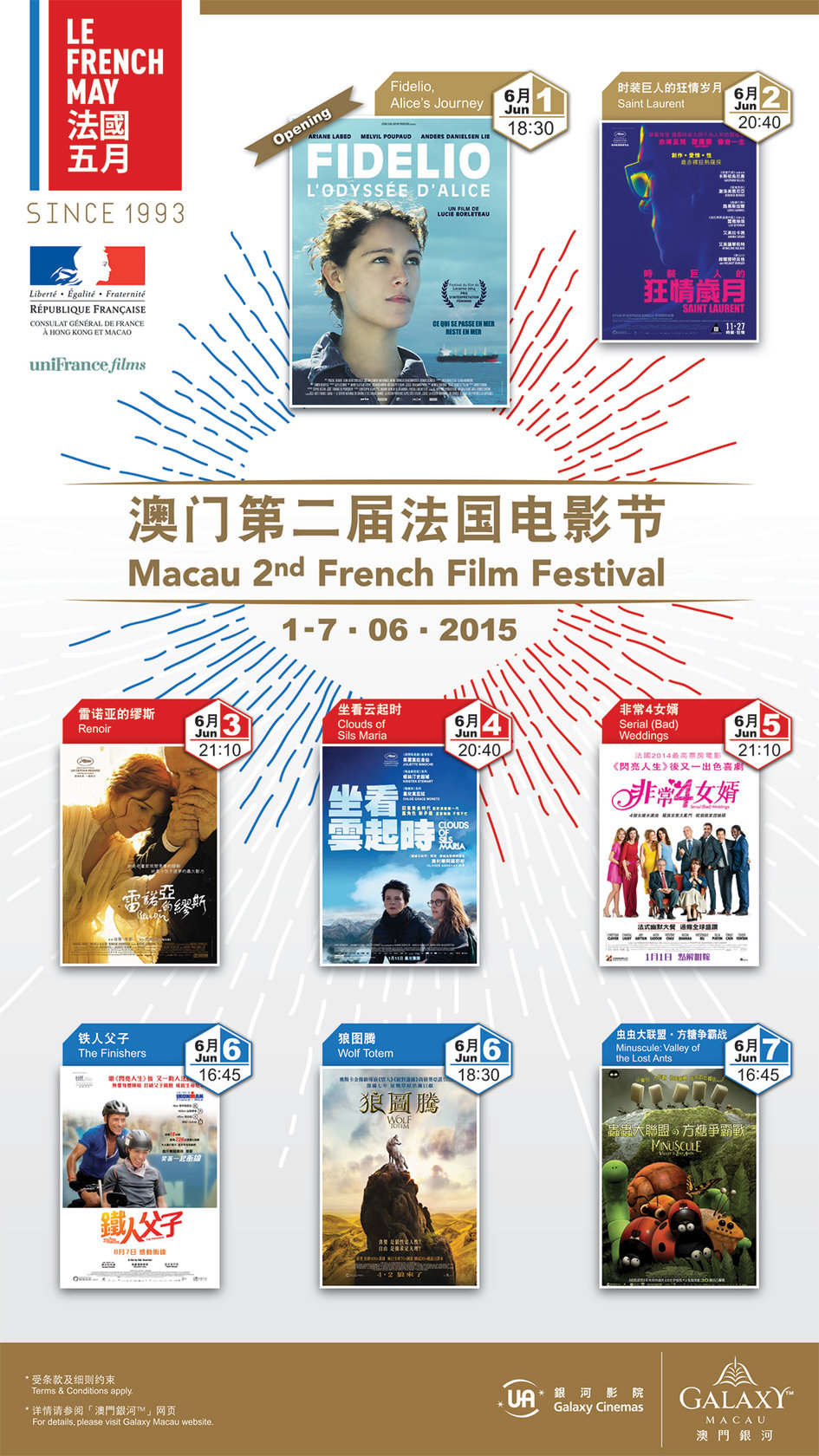 Discover a selection of 9 French films for the first time shown in Macau:

Synopsis : Thirty-year-old Alice is a sailor. She leaves Félix, her man, on terra firma, and embarks as a mechanic on an old cargo ship, Fidelio. Once on board, she discovers that she is replacing a man who has just died and that Gaël, the first great love of her life, is the ship’s captain. In her cabin, Alice finds a notebook that belonged to her predecessor. What she reads therein - mechanical problems, sexual conquests and melancholy love - curiously reflects her own journey.The only woman amongst a male crew, lulled by her love affairs that start to reel and the camaraderie in ports of call, Alice exposes herself to the joy of living everything at once and trying to stay on course.

Opening film in the presence of the director Ms.Lucie BorleteauShow: Monday June 1st at 18h30

Synopsis :A biopic focusing on the 1965-76 period in the life of the famous fashion designer.

Synopsis :The Côte d’Azur. 1915.In his twilight years, Pierre-Auguste Renoir is tormented by the loss of his wife, the pains of arthritic old age and the terrible news that his son Jean has been wounded in action.But when a young girl miraculously enters his world, the old painter is filled with a new, wholly unexpected energy. Blazing with life, radiantly beautiful, Andrée will become his last model, and the wellspring of a remarkable rejuvenation.Back at the family home to convalesce, Jean too falls under the spell of the new, redheaded star in the Renoir firmament. In their Mediterranean Eden – and in the face of his father’s fierce opposition – he falls in love with this wild, untameable spirit... and as he does so, within weak-willed, battle-shaken Jean, a filmmaker begins to grow.

Synopsis :At the peak of her international career, Maria Enders is asked to perform in a revival of the play that made her famous twenty years ago. But back then she played the role of Sigrid, an alluring young girl who disarms and eventually drives her boss Helena to suicide. Now she is being asked to step into the other role, that of the older Helena.

Synopsis : Claude and Marie Verneuil, from the provincial, Catholic upper middle class, are rather conservative parents. But they’ve always forced themselves to be open-minded.However, their tolerance has been sorely tested when their first daughter married a Muslim, the second a Jew, and the third a Chinese man. Their hopes to at last see one of their daughters married in church hence focus on their youngest, who has, halleluiah, just met a good Catholic...Show: Friday June 5 at 21h10

Synopsis :Julien is 17, has a great sense of humor, bags of charm, and is wheelchair-bound due to cerebral palsy. Despite their love for him, his family is gradually falling apart under the strain of dealing with his disability. In a bid to bond with his father, Julien challenges him to participate with him in the Ironman race in Nice (French Riviera), a triathlon in which his father has previously competed. This trial is already exceptional, but it becomes almost impossible if one has to help a disabled youth throughout the course. Beyond the sporting exploit, this is the story of one family’s exemplary combat, and a moving portrait of the love between a father and his son.

Synopsis :1969. Chen Zhen, a young student from Beijing, is sent to Inner Mongolia so as to to educate a tribe of nomadic shepherds. But it is in fact Chen who has a lot to learn – about life in this vast, hostile, and breathtaking land, about the notion of community, liberty, and responsibility, and about the most feared and venerated creature of the steppes, the wolf. Seduced by the complex and almost mystical bond between these sacred creatures and the shepherds, he captures a wolf cub in order to tame it. But the burgeoning relationship between man and animal – along with the tribe’s traditional way of life and the future of the world itself – is threatened when a regional representative of the central authority decides to do whatever it takes to eliminate wolves from the region.

Synopsis :In a peaceful forest, a picnic sparks off a merciless war between two rival ant gangs both after the same loot: a box of sugar! In this tempest, a young ladybird becomes friends with a black ant and helps her save her people from the dastardly red ants...

Synopsis : A young Japanophile Belgian woman in Tokyo falls into a whirlwind romance with a Francophile Japanese student. Her head filled with dreams, Amélie, 20, goes back to Japan, where she spent her childhood. To earn a living, she decides to give private classes in French and meets Rinri, her first and only student, a young Japanese man with whom she soon has an intimate relationship. Between surprises, happy times and the pitfalls of a culture shock that is both poetic and amusing, she discovers a side of Japan she had never seen before...