Appeared in the 19th century, the idea of “Francophonie” was institutionalized in March 1970 by the signature of the Convention of Niamey (Niger) that gave birth to the Agency of Cultural and Technical Cooperation, the precursor of the International Organisation of La Francophonie. Deeply rooted across the five continents, the Francophonie is a powerful network of solidarities that, beyond French language, promotes values which are implemented on the ground through a broad spectrum of cooperation. These core values are peace, brotherhood, respect of human rights, transmission of knowledges and sustainable development.

The Francophonie at a glance::

Firstly, the word “Francophonie” stands for the group of people who share a common language, French. According to the latest report from the Observatory of French Language, published in 2018, 300 million people speak French everyday across the five continents. The French language is the 5th most spoken language worldwide and the 4th most-used on the Internet. Moreover, there are 132 million French learners today. In 2050, the number of French speakers is expected to reach between 500 and 800 million people in the world.

Secondly, the Francophonie has grown into an international institution: the International Organisation of La Francophonie (OIF). It aims at promoting the French language and implementing political, educational, economic and cultural cooperation within the 88 states and governments which are taking part into the OIF.

The next momentum will be the 18th World Summit of the Francophonie, which will be held in December 2020 in Tunisia in the presence of the Heads of State or Government of member-states.

Brief history about the OIF

The idea of “Francophonie” has become more and more concrete in the 1960’s, as the French language started to emerge as a useful tool to build solidarity as well as development and to support the reconciliation processes carried out in different countries. On 20th March 1970, the Convention signed in Niamey led to the creation of the Agency for Cultural and Technical Cooperation (ACCT): a new intergovernmental organisation based on the sharing of a common language – French – with the vocation of promoting and disseminating the cultures of its members and intensifying cultural and technical cooperation between them. In 2005, ACCT became the International Organisation of la Francophonie after decades of evolution.

See complete timeline of the development of OIF (in French): https://www.francophonie.org/de-la-naissance-de-la-cooperation-francophone-jusqua-aujourdhui-914

The Francophonie has come a long way over the past 50 years. Its mission does not stop at the promotion of the French language and cultural and linguistic diversity. It nowadays encompasses the promotion of peace, democracy and human rights, a strong support to education, training and higher education, as well as leading research and initiatives in the fields of economic cooperation and sustainable development.

France is deeply attached to the core values of Francophonie. Within its diplomatic action, it promotes French language and multilingualism as well as values associated to the respect of human rights.

We invite every member of the French-speaking community to continue promoting the French language and defend the values of la Francophonie. 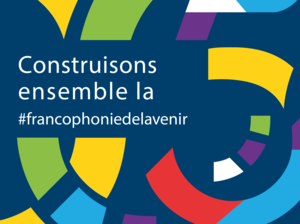 Video about the Francophonie :

Learn more about the OIF: https://www.francophonie.org

Official video of the OIF (in French with English subtitles):