Following the success of its partnership with Independent Filmmaker Project (IFP), initiated during last year’s Independent Film Week in New York, French In Motion is repeating its call for international projects, written in English: films, TV series, documentaries, and digital series, for participation in the upcoming edition of Film Week, held from September 17 – 21 2017 in NYC.

During Independent Film Week, IFP organizes the No Borders International Co-Production Market, for the professionals behind the selected projects (180 projects in 2016). The only market for international co-productions in the U.S., No Borders gathers producers, filmmakers, distributors, broadcasters, agents and investors from the US industry ( Amazon, HBO, CAA, A24, FilmNation, etc…) as well as international producers and filmmakers, in order to establish production and funding partnerships, or to find distribution outlets. Projects coming from outside the US must be submitted through IFP’s international partners, which include French in Motion and Unifrance.

Throughout the market, the teams behind the selected projects will receive personalized, face-to-face meetings with hand-picked potential partners. The teams will also have access to the rest of the festival, screenings, panels, and to networking events held every evening, including the French In Motion/Unifrance soirée. (Accreditation for the festival, market and parties is included; the teams are responsible for their own flights and lodgings). 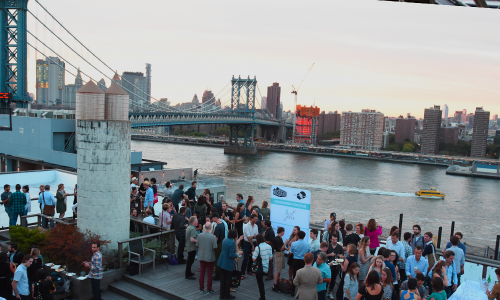 Past alumni include David Lowery’s Ain’t Them Bodies Saints, Benh Zeitlin’s Beasts of the Southern Wild, Miranda July’s Me and You and Everyone We Know, Barry Jenkins’ Moonlight, Dee Rees’ Pariah, Robert Eggers’ The Witch…

In 2016, IFP accepted 3 projects submitted through French In Motion (from a total of 35 applicants and 8 pre-selected projects): 1 film, 1 television series and 1 digital series. http://www.telerama.fr/cinema/le-cinema-independant-francais-en-speed-dating-a-new-york,147910.php http://frenchinmotion.org/4086

Eligibility: – Feature films, television series, digital series and documentaries – The project must already have an option contract with a production company, the latter submitting the project – The co-producer and/or the director/ the screenwriter must be a French citizen or permanent resident – The project can not have already premiered – All of the submitted documents must be entirely in English Applications are submitted through the site www.frenchinmotion.org and will be reviewed upon payment of a submissions fee of $100

Applications must be sent before May 23, 2017. To include in application: all documents must be written in English – Pitch – Summary (200 words) – For feature-length films: a completed script and a mood board – For documentaries: a bible and detailed treatment, both in English, as well as a moodboard – For series: a bible including the concept and synopsis, character lists, and story arcs for the first season, all in English – A list of the producers and respected companies, including their awards and credits – A list of the attached talent (writer, director, cast…) – Funding already secured / anticipated budget – Financing partners / co-productions partner / existing distribution partners

ORGANIZERS CANNOT ACCEPT PROJECTS WITHOUT ATTACHED PRODUCTION. THE PROJECT MUST BE SUBMITTED BY THE PRODUCER.

The French In Motion jury will form a pre-selection of 6 – 8 projects, which will be announced between June 5 – 9, 2017. The projects will be evaluated in terms of creative and commercial merit, the possibility of co-productions and partnerships between the U.S. and France, financing prospects, and the packaging elements already in place.

For questions about the call for projects, please email nathalie@frenchinmotion.org and consult the IFP site for more details about the different formats and elements required.

FRENCH IN MOTION is a New-York based not-for-profit organization, created in May 2016, that reunites Franco-American professionals in movie, TV and new media industries. All occupations in creation, production, distribution are represented : screenwriters, directors, producers, crews, set and costume designers, post-prod teams, distributors, broadcasters, institutionals, etc…French In Motion is supported by Unifrance and Cultural Services of the French Embassy.