FIS “Inside Out” Project On Price Road, Jardine’s lookout [fr] 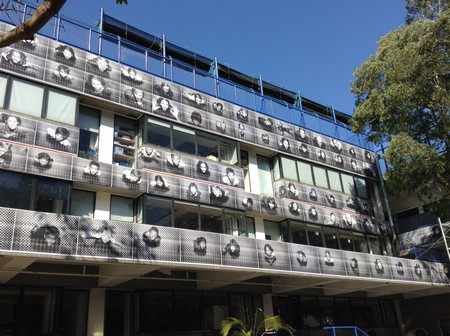 FIS has unveiled an artistic project that consists of covering the façades of two of its buildings with hundreds of massive black and white posters of students looking at the sky, in line with the “Inside Out” international project, created by French Artist, JR.

Following the 2011 Ted Prize Winner JR’s Hong Kong visit, hundreds of students of the French International School, aged 5 to 18, flocked to Hong Kong Galerie Perrotin (50 Connaught Road, Central), to have their portraits made in a specially set up photo booth. Several artistic projects were then born from there. The spirit of the project is that “at least five people” should get together and do something public about their pictures.

The FIS “Inside Out” project consisted of covering the walls of two school buildings with more than 300 posters sized 0.9mx1.4m. 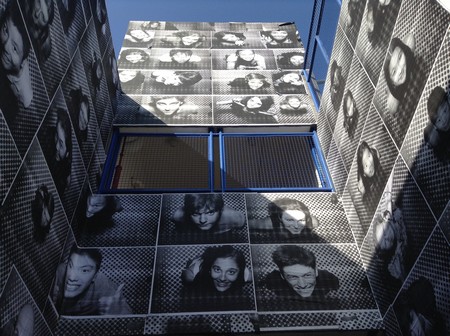 “Everything is normally happening inside the walls of a school. Putting these faces on the outside, with their faces all looking at the sky, is changing the perspectives. That’s what it’s all about.” said Isabelle Bezançon, head of the Art department at the FIS, the art teacher who managed the project. Isabelle Bezançon was a long time admirer of the work of this young French artist JR and was immediately game to create a massive wall of portraits. Some art students have also worked on different projects using their picture as a basis.

Due to some technical restraints and because the school decided to do everything by itself, the two walls chosen were the most accessible ones. One is in Price Road, where FIS hosts kids from P1 to P3 and the French equivalent classes. The other one is the Kindergarten in Sheng Wan.

“Though it is not clear from our archives whether FIS started in 2013 or 2014 in Hong Kong, we thought we would use this wonderful and creative event as a soft launch of our 50 years in Hong Kong” said Florence Grelon, President of the Executive Committee of the school, the Parents Committee that manages the business side of the school. “This sets the tone: it is different, it is creative, and it shows FIS as a plural and rich community of all ages and all backgrounds. That’s what we want to celebrate and that’s how we want FIS to remain in the next 50 years in Hong Kong” she added.

As part of FIS 50th celebratory festivities, we will be launching the "Art House" campaign, an incentive to immerse our young students in an artistic and creative learning environment. The foundation aims to transform our three school campuses as the platforms for ongoing installation and exhibition of all art forms, by established and emerging artists; thereby creating an active interaction and dialogue between the artists and FIS community.

More about the FIS: