COP 21: when students organize their own climate conferences [fr]

Since the beginning of 2015, many students participated the COP21 in their own way by organizing simulations of climate negotiations. Unanimously considered enriching experiences which allowed participants to realize the complexity of such negotiations. 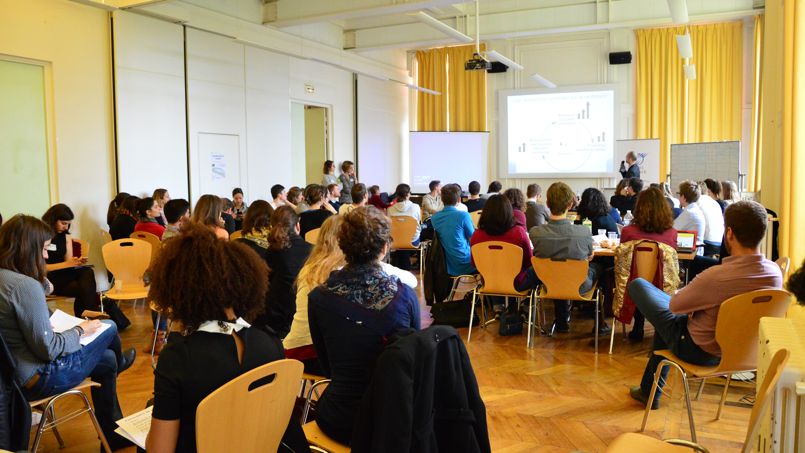 At Le Bourget, the 21st Conference of the Parties (COP21) started last Sunday and will continue until December 11. But in the student world, negotiations have begun for a much longer time. "Climate Paris 2015: Make It Work" simulation which took place last May at the theater of Nanterre-Amandiers, has attracted more than 200 students, most of them are from Sciences Po but others from around the world. For three days, students representing states and non-state delegations (forests, major economic players, youth ...) exchanged, debated, listened. "The second day, we realized that we were leading to nothing ... There was a big moment of pressure, and we stayed up all night. Finally, we reached an agreement, but that it was difficult! "recalls Isoline Degert, student at Sciences Po and in charge of communication of the event. "I found this a very interesting experience, but I understood how complicated such negotiations were, and this makes me fear that the real COP will not achieve anything ... I hope in any case that the states will succeed in agreeing on a good basis to be improved in the coming years. "

«The key is to stimulate reflection among participants»

At the Higher Institute of Engineering and Environmental Management (Institut Supérieur d’Ingénierie et de Gestion de l’Environnement, ISIGE), environmental training center and Sustainable Development of Mines ParisTech, a simulation day organized by the school, the alumni association and the firm of Albedo Climate Council was held on November 7. The sixty participants, mainly students of ISIGE and Mines, were divided into six geographical groups who negotiated among themselves in the objective of reducing global warming. "We had to manage divergent interests of the groups, all the logistics ... It was really not easy. But as and when we got involved, we wanted to make things happen, it has set thoroughly, "says Alice Etienne, a member of the group of "other developing countries" and student in specialized Master at ISIGE. After three negotiating phases, participants finally managed to get through a simulation and settle on 2.1°C of warming thanks to the software developed by MIT. "This result, also quite satisfactory, is somewhat anecdotal, it is the process that is genuinely interesting," said Valerie Lenglart, head of study of one of the specialized masters of ISIGE. "The interest of the simulation was to address the geopolitical aspects of this negotiation beyond environmental issues. The goal was that students are placed in real situations and see how difficult it is to compromise. In a day of exercise, it is obviously impossible to realize all the complexity of COP21, but the key is to stimulate reflection among participants. "

At Inseec Business School in Paris, it is the Grinseec association, a school student organization involved in sustainable development, which organized a simulation of the COP21 using the tool "COP in MyCity "imagined by think-thank climates. While only 13 students participated, Johanna Chopin, Grinseec president, said he is still satisfied "to have educated ten people, it’s still better than zero!" "Placed in a position of heads of states, each with specific interests, the participants realized that the objective 2 was very difficult to achieve. We also wanted to demonstrate that it was probably already too late ... "Johanna resumes. "Certainly this is a risky message, but we wanted to make them understand the magnitude of the problem and show them that they could act on their scale." Johanna hopes that this COP will mark "a turning point, a click". Meanwhile, his association has already launched a new project: selling gift baskets composed of products from a family production of Normandy. The goal? Sensitize students to the principle of the short circuit, and make them realize that they have much to gain by buying directly from producers. It is also another way to show young people that their actions truly have the power to change things.