At the latest Hong Kong International Optical Fair, 10 French eyewear companies will present their innovations from November 6 - 8, 2019 at the French Pavilion organised by Business France, the national agency supporting the international development of the French economy. In this sector, which is associated with the image of fashion and technological prowess, France is recognised for its traditional know-how and the quality of its products. 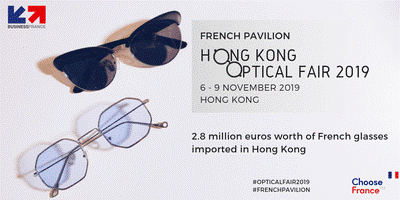 The global eyeglass frames market is in the order of USD 6.1 billion and continues to expand rapidly: + 14% over the last 5 years, notably in Hong Kong, which represents the 2nd largest global import market (12% of global demand). Despite strong competition, France is the world’s 6th exporter of eyeglass frames, and Hong Kong’s 9th supplier. French manufacturers are highly sought-after and supply more than 70 luxury brands and labels internationally. The optical sector in France represents a turnover of €3.14 billion. In so far as concerns jobs, the sector has 10,500 direct jobs spread over 170 companies, consisting mainly of SMEs and VSEs. Today in France, the eyewear market remains dynamic thanks to its ability to innovate and assert its position as one of the main pioneering countries for new trends. The products on offer tend to change, particularly given the prolonged exposure to screens, with blue light directly affecting vision.

Industrialised for the first time in the 19th century, in the Haut-Jura region, spectacles are a part of French heritage. Several generations of eyewear manufacturers have followed each other in an activity that combines design with technology. Although spectacles have long been considered to be visual “crutches”, their shift towards fashion has given a new lease of life to this industry, where France, thanks to its strong reputation and its expertise in fashion, has succeeded in setting itself apart.

The eyeglass frames market in Hong Kong is very promising, which suggests major opportunities for the 10 French exhibitors. It is therefore in a favourable environment that they will be able to present their latest products to consumers who are very keen to see what products the French have to offer, consumers who are looking first and foremost for quality, new designs and safety, and who have no qualms about buying several pairs of glasses to match what they are wearing.

The companies grouped together by Business France are located in Hall 3 Brand Name Gallery of the Hong Kong Convention and Exhibition Centre: