This year, the leading Hong Kong International Wine & Spirits Fair is expecting to host more than 70 French exhibitors under the banner of Business France, partnering with AANA The New Aquitaine Food Agency at the Hong Kong Convention and Exhibition Centre. No.1 on the Hong Kong market, French wines & spirits with respectively 60% and 40% market shares in Hong Kong will take up an area of 513m² in Hall 3F-G. The French Tasting Room, after receiving a thriving successful response last edition will be reconducted at the heart of the French Pavilion. During 9 thematic tasting sessions, French exhibitors will showcase their latest cuvees as well as their genuine bottles to be tasted by visitors. It is the opportunity for importers, professionals and amateurs to meet the French savoir-faire, made in France, made with love. 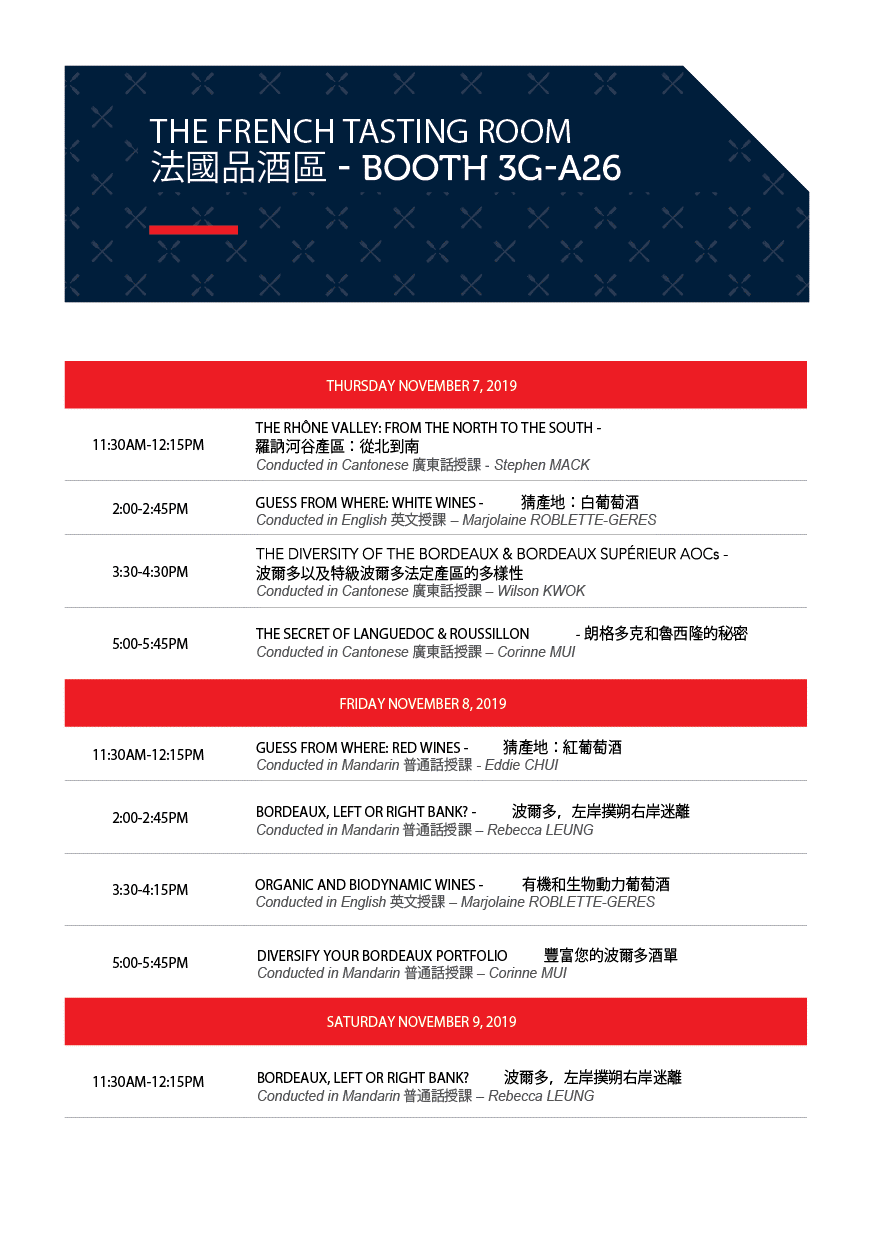 The French Pavilion at Hong Kong International Wine & spirit Fair 2019, which is expected to be a meeting place for professionals, plays an essential role in promoting the variety and quality of wine and spirits in France. Indeed, the current economic situation is ideal: between 2017 to 2018, French wine and spirits exports rose in value to 13.9 billion €, which is 2.6% more than in 2017. Hong Kong is the 7th export market for French wine and spirits with 587 million €, representing a significant rise of 11.7% in 2018.

Moreover, Hong Kong is not only the highest wine consumption in Asia with 4.9L. per capita per year, but also a platform to re-export to mainland China and South Asia. Though the benefits for wine makers of forwarding to China via Hong Kong reduced (and the volumes slightly declined these past three years,) it was observed in 2018 that 32% of imported wines were re-exported: 87% to China, then Macao, Taiwan and South East Asia. As a matter of fact, the Chinese market is increasingly mature. Population evolves towards more regular and thoughtful consumption. These newly wise consumers have strongly helped to develop niche sectors such as wines made from biodynamics, grape varieties or rare and original blends. In addition, Hong Kong spirits consumers are getting younger and younger.

This new clientele particularly appreciates the spirits served in cocktails and is looking for modern, trendy and unique drinks. Whiskies, gins, rums and vodkas are favored by this trend. Inescapably, this phenomenon was marked by the strong development of cocktail bars. Champagne, the renown prestigious sparkling wine, is also becoming increasingly popular in Hong Kong, driven mainly by major brands and independent producers, conjointly present on the market. Chiefly, Bordeaux wines exports are still undeniably much appreciated by Hong-Kong consumers. It represents 72% of the value and 52% of the total volume of exported wines. The Rhone Valley is simultaneously more and more valued with 28% of increase representing 5.3M € and a 10.5% rise in volume with 4,500 HL. Finally, Protected Geographical Indication and Geographic Information System wines also experienced strong growth in their exports, mainly as a result of exports from PGI Pays d’Oc.

Taking this into account, Business France, in partnership with the AANA, have launched the B2B online platform for French wines and spirits. In order to broaden the scope of French wines and spirits and to connect exhibitors to customers, Business France created the French W&S Business Network https://marketplace-frenchcellar.com/en. This platform, updated by the producers themselves, brings together more than 600 suppliers and 3000 products, allowing Chinese and Hong Kong’s professionals to easily find their desired products, exchange with suppliers and request samples.