Home > Culture, Education and Science > News > French Films in Hong Kong > Back to back film screenings of JR’s "Les Bosquets" and "Ellis" on (...)

The HOCA foundation in partnership with SCAD, will be screening graffiti artist’s short films "Les Bosquets" and "Ellis" on 27th of January on SCAD Hong Kong Campus. Admission is free of charge.

ELLIS, a short film starring Robert De Niro, written by Eric Roth, directed by JR. The short narrative film, ELLIS, awakens our collective memory. Leaving their past behind them, immigrants fleeing poverty, discrimination, dictatorship arrived there. Ellis Island was the gateway to the United States for millions of immigrants. Upon arrival, they were processed, approved or denied access. Due to sickness or simply tiredness, many were placed in the hospital. A purgatory of sorts, in the shadow of the Statue of Liberty, where thousands of men, women and children awaited their fate. ELLIS tells the forgotten story of these immigrants who built America while questioning about those who currently seek the same opportunities and safety in this country and other parts of the world. The short film stars Academy Award Winner Robert De Niro, was written by Academy Award winner Eric Roth and directed by the artist JR whose Unframed art installations in the abandoned Hospital complex serve as the set for this powerful and timely film.

LES BOSQUETS, collaboration between JR and the New York City Ballet. The film Les Bosquets brings the audience in a place where art and the power of image interweave. Based on the story of Ladj Ly and the performance of the ballet Les Bosquets of New York City Ballet (2014) inspired by the riots in the French suburbs in 2005, JR reveals its experience in the ghetto of Montfermeil where he created his first project, Portrait of a Generation. This film is a continuation of this 10 years project, for which he uses various means of expression and narration : video archives, choreography and testimony. This short film will be presented exclusively in galleries and museum shows. 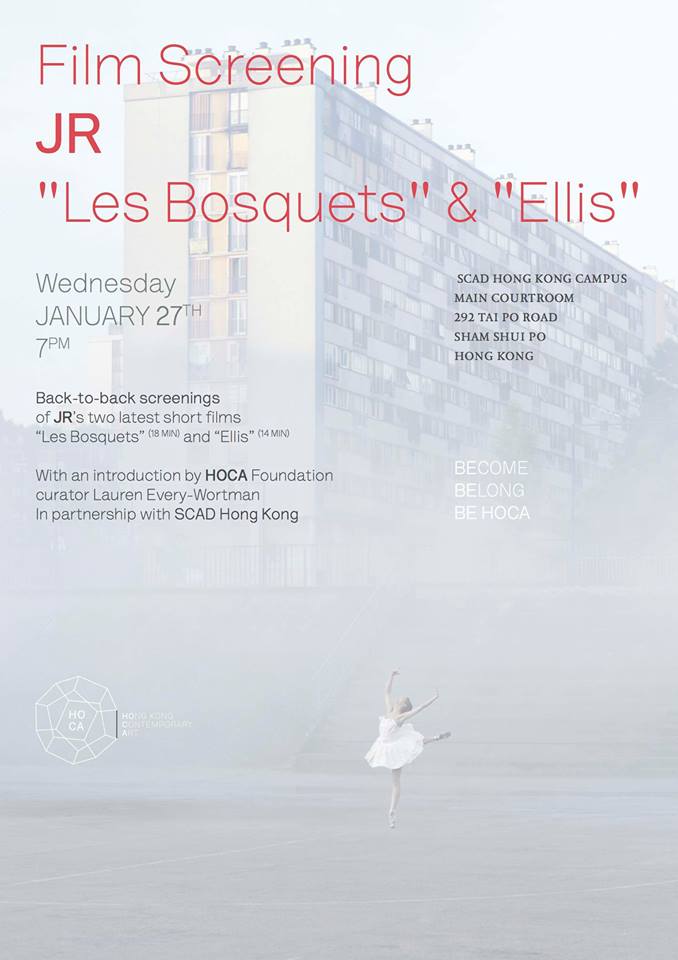